The government's clean air strategy sets out how it intends to go ‘further and faster’ than the EU in reducing exposure to particulate matter pollution. The government estimates that its proposals will reduce the costs of air pollution to society by £1 billion a year by 2020, rising to £2.5 billion a year from 2030.

Air pollution is the fourth biggest threat to public health after cancer, obesity and heart disease. The strategy sets a goal to halve the number of people living in locations where concentrations of particulate matter are above the WHO guideline limit of 10 ug/m3 by 2025.

On 22 May 2018, Environment Secretary Michael Gove published a draft Clean Air Strategy for consultation. The strategy was backed up by new primary legislation, and is in addition to the government’s £3.5 billion plan to reduce air pollution from road transport set out in July 2017. 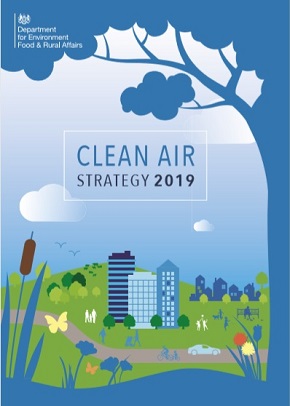 On January 14 2019, the government published the final Clean Air Strategy based on the responses received during the consultation period for the Draft Strategy – which ran from May to August 2018. The new document places further restrictions on wood-burning stoves and open fires as part of a plan to combat air pollution in England.

The strategy includes proposals to:

“The importance of raising awareness of the dangers of air pollution is evident in a research report, also published today, which shows just 1 in 5 respondents felt they knew a lot about its effects. The report also showed a lack of awareness of the wide range of sources of air pollution with most naming transport as the main cause. But transport emissions are only one part of the problem. From farming to cleaning solvents there are a large range of other day to day practices, processes and products that produce harmful emissions.

“Of particular concern is burning wood and coal to heat a home which contributes 38% of UK emissions of damaging particulate matter. Cleaner fuels and stoves produce less smoke, less soot and more heat. In future only the cleanest domestic fuels will be available for sale."

“Air Pollution is contributing to a national health crisis. If we fail to take decisive action, we risk more of our children suffering from asthma, and patients needlessly ending up in hospital. Our health service can only go so far in treating the conditions that dirty air can contribute to, and we have a responsibility to stop this issue at source. Today’s Clean Air Strategy and Air Pollution Tool do just that, taking a giant step towards cleaning up our air for good.”

In response to the proposals relating to wood burners in the draft strategy, BSRIA called for more education. Allan Wilson, a test engineer at BSRIA, said; “While there is tighter legislation being introduced in terms of appliance manufacturers having to demonstrate compliance, there is no control as to how they are operated once sold to the consumer." For more information see: BSRIA response to draft clean air strategy.

Responding to the final strategy, Allan Wilson said: "BSRIA calls on government to reach deeper into the causes of pollution and continue to press forward in making real reductions to encourage sustainable clean combustion. The bigger problem produced by open fires and the old stock of solid fuel stoves over the previous century that burn wood and coal – is yet to be addressed. From a solid fuel appliance angle, the strategy is balanced and the proposed measures are in line with the introduction of the Ecodesign Directive.”

Retrieved from "https://www.designingbuildings.co.uk/wiki/Clean_air_strategy"
Create an article