Birds such as pigeons or seagulls can establish themselves in almost any location where they are undisturbed and have a regular food source. This means they are often found in urban spaces.

Their presence on building entrances and ledges, in heating, ventilation and air conditioning (HVAC) systems, on roofs, near waste storage areas or in outdoor locations such as monuments, play areas, golf courses and cafes, can present a nuisance for facilities managers, landlords, customers and building occupants.

In instances where pest control has been an ongoing issue, some architects may include pest management plans into building specifications as part of an integrated facilities management solution.

One of the most prevalent issues in towns and cities is bird infestation on roofs - resulting in blocked gutters, droppings and so on. If birds become established, they can be difficult to remove. They can be loud, cause damage to structures, scavenge for food and become territorially aggressive.

Other related problems include the following:

Other than being unattractive, bird droppings can lead to several problems on and around buildings. Some bird droppings are acidic, which can create structural weaknesses on roofs and other supporting structures. This acid is capable of damaging tar based roofing systems and other surfaces such as concrete, brick or stone.

Droppings can also cause health and safety issues and slip fall hazards. This may happen on lawns and car parks, particularly when larger birds (such as Canada Geese) have been feeding in the area.

Bird droppings, which can be transmitted on the bottom of a person’s shoes, can also carry toxic fungus, parasitic organisms and transmissible diseases. If invisible spores become airborne, the unassuming dust can come in contact with surfaces or be passed along into buildings through HVAC systems.

Bird nests (which can include materials such as flammable twigs and straw) can create fire hazards. They can also gather to block drains and damage roofs.

Some birds may become aggressive if they feel threatened by human activity near their nesting areas. Feeding should not be encouraged, as this can exacerbate the behaviour. Posting “Do Not Feed the Birds” signs is sometimes all that is necessary.

Residual debris from decaying nests can create odours from excrement. Dead chicks and adult birds can add to the smell and debris. These carcasses should be removed promptly, and gloves should be used in the process.

The first step in creating a bird deterrent programme is determining what defines a problem. Some environments will have zero tolerance (such as healthcare facilities that have pigeons roosting in heating and ventilation systems), while other locations (such as infrequently used storage buildings) may adopt a more tolerant policy.

It is also important to understand what can and cannot be done to address the issue. This is even more essential if the species being dealt with is protected. In these instances, it would be necessary to obtain a permit to proceed with management strategies that might disrupt their selected habitat. Whether dealing with one bird or a flock, it’s important to make sure any approach is legal.

Selecting the right management method is essential. Certain approaches work better with some species than they do with others, often due to behavioural differences. Choosing an incorrect product may result in additional problems, even if it resolves the initial problem. For instance, one type of deterrent used to control pigeons could work well, but for smaller birds, it simply becomes a perfect place to build a nest.

There are three activity levels (known as ‘pressure’):

Some methods of control will require permits, equipment and training.

Initial strategies can include monitoring, capture and removal. If birds return, there are several other strategies that can be used. 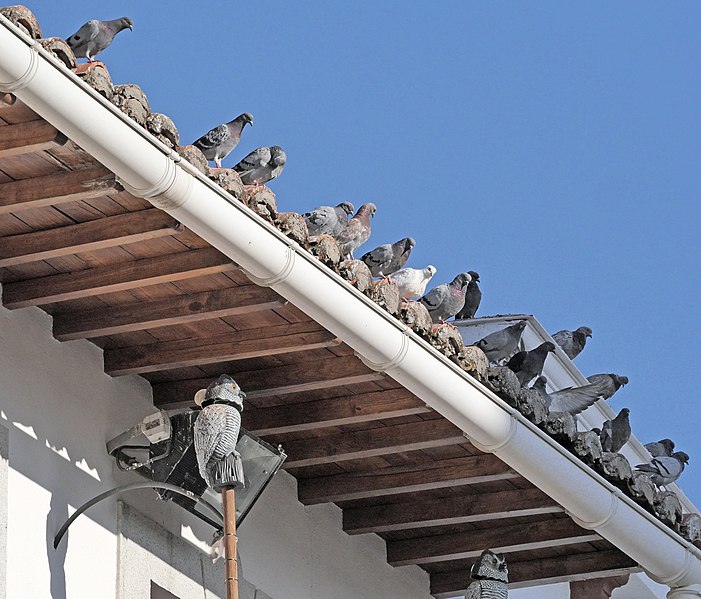 No matter what controls are selected, it’s important to clean the area of smells and markings before they are implemented. It may be necessary to try several different methods over time in order to control the situation.

Regular checks for new activity and maintenance will also be required. A quick response may make it easier to keep the birds out of the area.

Retrieved from "https://www.designingbuildings.co.uk/wiki/Bird_deterrent_programmes"
Create an article