On 19 November 2021, BSRIA held an event that examined the tangible prospects of a net zero carbon future. Taking place shortly after COP26 in Glasgow, the BSRIA Briefing 2021 explored the subject of net zero as ‘Necessity, not Choice’. The programme elicited discussion amongst attendees who were presented with ideas to motivate action both at a personal level as well as throughout the construction sector.

The morning began with an introduction from BSRIA’s CEO Julia Evans OBE, who started by speaking about how each person can make choices and decisions that address a net zero carbon future. Evans explained that an inner voice can inform each person to take action - even if it’s just one thing - and make choices that recognise the necessity of tackling climate change. She closed her remarks saying “Every decision counts.” 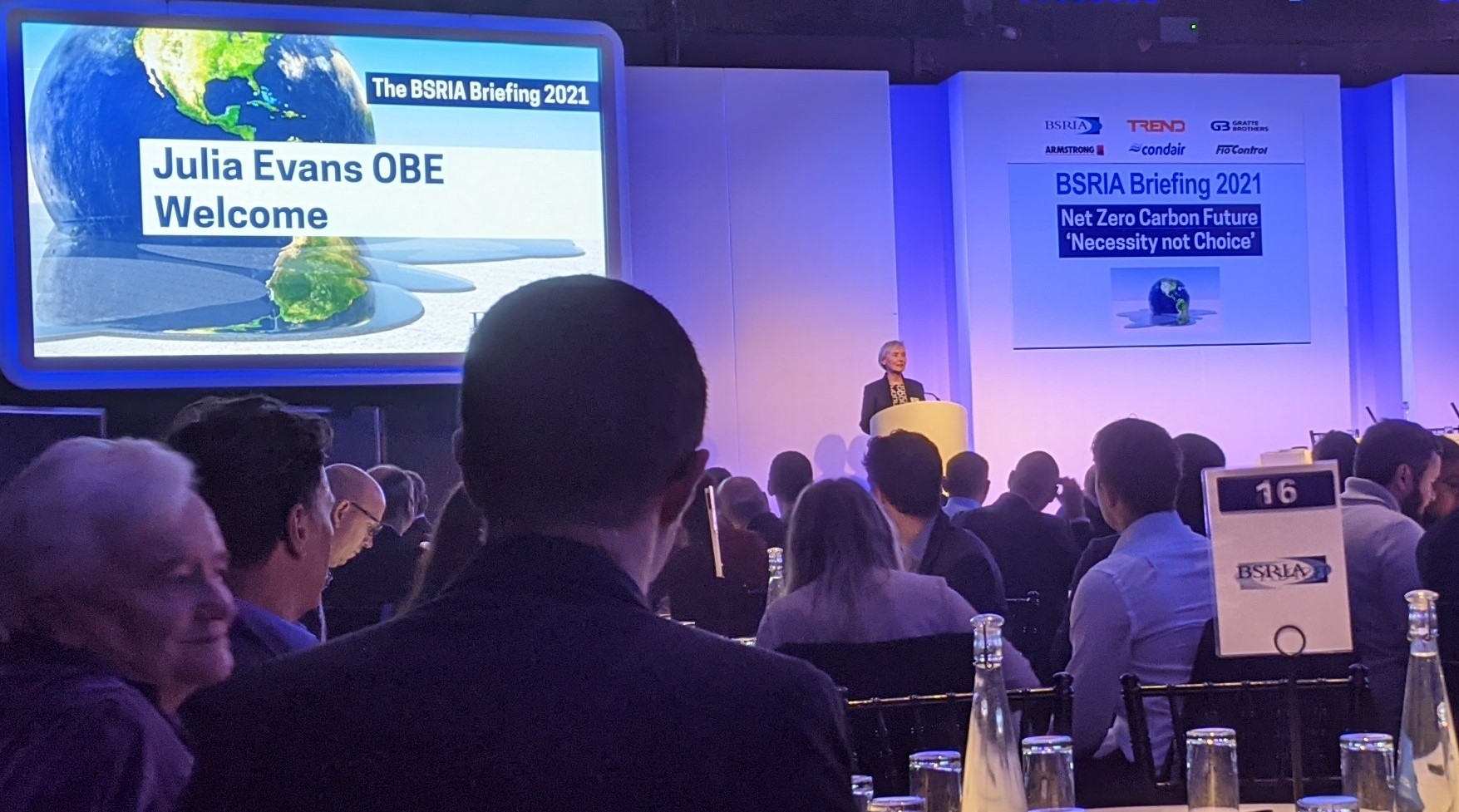 This theme was picked up by the keynote speaker, Professor Chris Rapley CBE, whose presentation was called, ‘So how does this move us forward’? He reviewed the increases in the earth’s temperature and talked about how the consequences of this shift are no longer seen as something that will happen in the future - they are happening now. In extreme instances, environmental disasters brought on by temperature changes have resulted in shifts in human migration, and there is no sign this will decrease.

Rapley stressed the need to end our dependence on fossil fuels and suggested that prospecting should be banned. He also proposed the move to net zero should be treated like other significant social shifts, such as the abolition of slavery or the emancipation of women. He noted that the concept of environmental activism may give some people a sense of hopelessness, anxiety and guilt, but young people are the ones who are taking action by finding others who share their beliefs.

“Actions drive beliefs,” said Radley, who urged members of the audience to find a suitable agency and take action. He explained that every decision should be followed by the question, “how does this move us forward? Every action should lead us in the right direction”, he concluded.

The next speaker was Georgia Elliot-Smith, environmental engineer and managing director of Element Four. As a proponent of disruptive sustainability, Elliot-Smith spoke about how sustainability is everyone’s responsibility and explained how, after having spent many years working on environmental issues from within the construction sector, she found she reached her tipping point in 2018. She says she experienced a sense of failure over the incremental changes taking place ‘around the edges’ of construction, and felt the need to do more. For her, one rallying point has been the future of UK carbon pricing, which would put a tax on carbon that would make it too expensive to continue polluting in the current manner.

Elliot-Smith suggested that members of the public who feel a sense of helplessness should stop acting as individuals and should find like minded people to create teams capable of fixing problems. She spoke of her decision to explore - and then join - Extinction Rebellion despite her initial reluctance, and she also said “Leaders are followers” and that political activism can bring about change.

On a less personal level, she spoke about how organisations can - and should - incorporate the UN's Sustainable Development Goals into their business plans and said that industries must become actively involved in turning the environmental situation around. They should be able to profit from doing the right things.

Finishing off the morning programme, Dr Chris Manson-Whitton from Progressive Energy shared the details of the HyDeploy hydrogen energy project which demonstrates how hydrogen can act as an alternative energy source to supply low carbon heat. The first phase of the project blended 20% hydrogen into a private gas network at Keele University (2019). The next phase of the test took place at Pilkington UK’s Greengate site in St Helens (2021). In both instances, reliability and safety requirements were met. 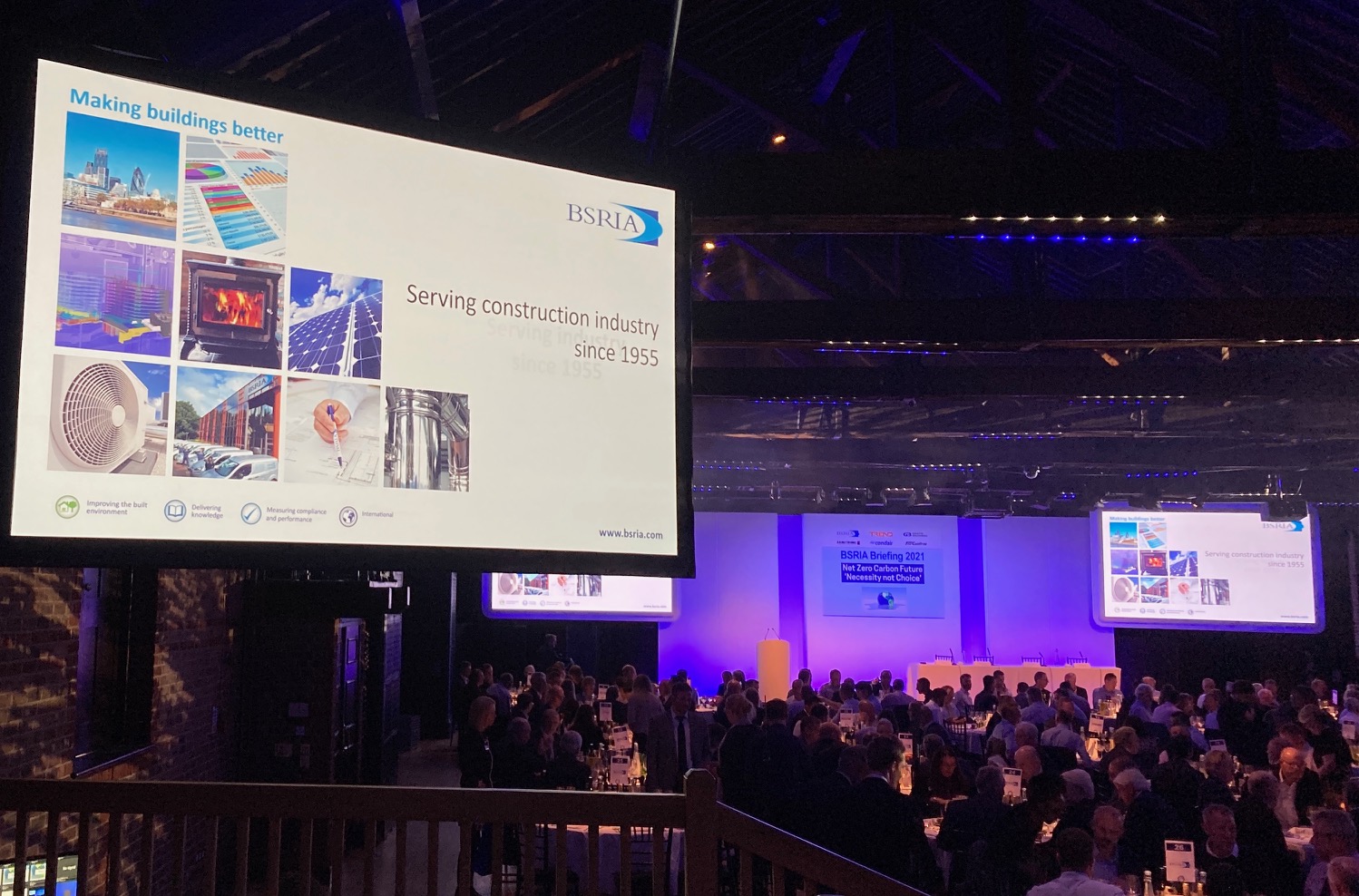 After a brief break, the presentations resumed with Graeme Maidment, professor of heating and cooling at the School of Engineering at London South Bank University. Just back from COP26, Maidment spoke about the size of the heating and cooling industry. He used the example of the evidence driven response to the COVID-19 pandemic as a rationale for taking the same approach to climate change.

Maidment suggested the biggest issues regarding climate change tend to occur in cities, and said that, unfortunately, “those who have done the least to cause problems generally feel the biggest impact.” He also pointed out the lack of change in technology regarding room air conditioning, stressing the need to pick up on the theme of the London plan, which is clean, lean and green.

Shifting the focus from changes in equipment to changes in behaviour, Dr Kris de Meyer, research fellow in neuroscience at King’s college London, talked about the two basic types of thinking: intuitive (or automatic) and reasoning (or controlled). He explained how human behaviour is first driven by intuitive thinking, which is informed through lived experiences and responses. Reasoned thinking comes second, and as a result, it requires greater effort.

These behaviours have consequences for designers and planners and can prompt better designs to drive better behaviours. “Action begets action,” he explained, stating, “it’s important to design for the right affordances.” (He explained that affordances are things the environment affords users to do.)

The last speaker of the second session was Xavier de Kestelier, principal and head of design at Hassell. Talking about embedding sustainability within design, de Kestelier described his experience working on a concept for a ‘home’ on Mars. This fascinating project was part of NASA’s 3D Printed Habitat Challenge, and demonstrated how refining an initial concept to incorporate sustainability is not impossible. In this case, it provided an outcome that delivered components of the project (such as printing furniture from reused plastic packaging) that are actually being produced and put to use.

After a break, BSRIA chairman Tom Smith introduced the closing guest speaker, Reverend Richard Coles, who spoke about his experience with social activism in the 1980s.

By telling his personal story, Coles illustrated how activism could be translated into “something leaders would follow”. This came about by using popular culture to influence behaviours and inspire institutional change. In his upbeat conclusion, he said, “the energies of activism can translate into action which can take society where it needs to be.”

Retrieved from "https://www.designingbuildings.co.uk/wiki/BSRIA_Briefing_2021"
Create an article