Passive design is one of the first steps in the Energy Hierarchy: 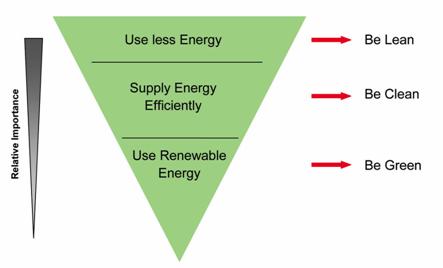 The energy hierarchy aims to help designers methodically work through reducing energy demand in a building and making systems as efficient as possible prior to just installing renewable technologies. Often reducing demand and increasing efficiency are skipped in favour of "sticking some PV panels on the roof" just to meet building regulations (or enhanced regulations such as The London Plan).

Passive Design is a design technique which uses the natural movement of heat, air and light to keep internal conditions in a building comfortable. By using natural movements, there is a reduced need for energy consuming Active Design measures such as comfort cooling, heat exchangers, boilers etc.

The aim of this issue is to encourage designers to adopt measures which reduce energy consumption and associated carbon emissions, while minimising reliance on active building services systems.

This issue offers the following potential benefits to end users and clients:

[edit] When to consider

The earlier in RIBA Plan of Work 2013 Stage 2 this can be considered, the better. Frequently however you'll find that many of the early passive design decisions are made by designers without documenting them and that the actual report which can be used as BREEAM evidence may only be produced towards the end of the RIBA Plan of Work 2013 Stage along with the Stage 2 report.

The evidence you need will more than likely be in a Stage 2 report, or Energy Strategy which likely will have been submitted to planning. Ctrl+F "Passive" "Lean" "Natural" to get to the right section.

If a passive design analysis is not being included in Stage 2/Energy Strategy reports, sometimes it's helpful to give engineers a blank template and tell them that essentially if they put something in each box, it'll end up compliant. This helps to stop certain aspects being overlooked without stifling their creativity in the design decision making process. An example can be found above.

Typically a report. A checklist of things to check the report contains:

The RIBA Plan of Work states that typically the engineers will produce an initial Part L report (BRUKL) during RIBA Stage 2, and a more accurate report during RIBA Stage 3. While the Part L report itself won't technically give you an energy demand reduction solely due to passive measures♦, the production of it does allow for you to know that it's time for your building physicist could produce the required evidence.

♦Many assessors will use the change in Energy Demand as stated on the Part L Report. This is technically wrong for various reasons, such as the Part L model not necessarily using realistic glazing in the notional building. Technically a building physicist should model two buildings, with the same glazing area, but with only the passive design measures varying. The baseline model should be modelled so that it is no worse than building regs values. You would then get two Part L Reports, and would need to compare the Primary Energy Demand (or CO2 emissions in BREEAM UK 2018 or International 2016) of the Actual Building for each to show a meaningful reduction.

A checklist of things to check the report contains:

The guidelines collated in this ISD aim to support sustainable best practice in the topic described. This issue may apply in multiple BREEAM schemes covering different stages in the life of a building, different building types and different year versions. Some content may be generic but scheme nuances should also be taken into account. Refer to the comments below and related articles to this one to understand these nuances. See this document for further guidelines.

Retrieved from "https://www.designingbuildings.co.uk/wiki/BREEAM_Passive_design"
Create an article