Most professionals working in the built environment are committed to using fewer potentially dangerous chemicals whenever possible. A recent trial has shown that there may be scope for using spiders rather than sprays to control woodworm populations. The introduction of a few spiders can break the woodworm cycle by catching the beetles prior to laying the eggs of the next generation.

The five year trial followed informal observations of Pholcus Phalangioides devouring a variety of prey during repairs to a property. The property had been comprehensively treated in 2005 with permethrin in a standard commercial water-based product applied as a spray.

All signs of life were eradicated, or so it seemed at the start of the project, but the following year it was clear that the woodworm (Anobium punctatum) had survived with plenty of fresh dust from beetles emerging in large numbers during the spring. After spraying there was also a conspicuous absence of any spiders with the exception of one or two Pholcus.

This species of spider misleadingly shares the common name “Daddy Long Legs” with the crane fly and the harvestman, neither of which are actually true spiders. There is a slightly better vernacular name; “Cellar Spider”, but Pholcus is by no means restricted to cellar-living, being happy to live under furniture, in cupboards or most conspicuously in top corners of living spaces where they like to hang in a characteristic upside-down position. 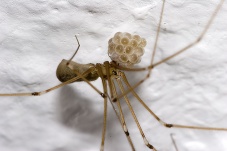 It is believed that these spiders are not native to Northern Europe where they are generally restricted to living indoors. They dislike cold draughts and rapid temperature fluctuations preferring average temperatures to be in the region of 8-10 degrees centigrade. In the UK they are more common in southern counties but are happy to prosper further north wherever conditions are suitable.

Their webs are untidy and lack the regular geometry or “funnels” associated with other species and the webs do not normally act as effective traps with Pholcus preferring to actively seek out their prey. Their webs are essentially a base from which to hunt and a place for the eggs to hatch into juveniles. The silk also comes in useful when they encounter a potential victim by flicking it from their spinnerets before closing in and injecting venom. Fresh catches are bundled up and dropped after being sucked dry.

Despite their tantalisingly slow and graceful movements, these spiders are actually very efficient venomous carnivores, but fortunately harmless to humans as their fangs are too small to penetrate our skin. They have relatively small bodies with a female body length of about 9 mm and males slightly smaller. However, the legs are about 5 or 6 times the length of the body (reaching up to 7 cm in mature females). Their effective hunting method can even be used against other species of spiders including the large house spiders (Tenegaria) which can be up to ten times their weight.

Another popular name for Pholcus is the “vibrating” spider as they seem to oscillate when startled. The vibrating also forms part of their mating rituals after which the males usually die. Males rarely live for more than a year, but females can live for three years and usually have a considerable number of suitors. 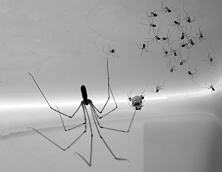 A population of these spiders can grow very rapidly depending on the abundance of potential prey. The availability of a good food supply stimulates egg production and mating which can take place at any time of year. The female initially holds as many as 30 eggs in a silk net between her chelicerae (jaws) and when hatched the young, transparent spiderlings share her web. Their growth depends on the availability of food and if it is in short supply, the mother will re-ingest the young. Sometimes spiderlings eat each other, with the slightly smaller males being particularly vulnerable. The young will start making foraging trips and will eventually establish new territory away from the mother. The spider population is therefore self-regulating and will decline when food becomes scarce.

At the property, four unoccupied rooms were monitored over a five year period. In 2006 the main prey of the small population of Pholcus was the large number of emerging woodworm beetles that had been untouched by the chemical treatment of 2005. In response to this abundant food source, the few spiders generated huge numbers of spiderlings that survived into adulthood with an estimated 75 adults in the spring of 2007.

The life cycle of the Anobium punctatum can involve a long spell in the wood as the larvae derive energy for pupation before emerging as adult beetles. A healthy population of hungry spiders at the time of beetles leaving the timber is crucial to form a significant break in the Anobium punctatum life-cycle; ideally before the mature beetles mate and lay eggs.

The estimated 75 adults in the spring of 2007 completely decimated the woodworm population with approximately 400 examples of beetles caught and wrapped in silk bundles. The subsequent decline in woodworm during 2008 and 2009 confirmed that they were being eaten if not before mating, certainly before they were laying their eggs.

Once the rich food supply of beetles started to wane, the Pholcus population began to decline despite the reappearance of house spiders as an alternative prey. By 2011 the population had declined to approximately 10 adults across the four rooms and most spiderlings were being ingested by their mothers.

A further research project could establish methods of producing spider colonies and how they could be supplied on a commercial basis to home-owners wishing to explore an alternative strategy to spraying.

More formal studies would be able to confirm the effectiveness of introducing small numbers of juvenile spiders into buildings with woodworm infestation. There may also be scope for designing “nesting places” to protect spiders from day-to-day cleaning. These “nests” could be provided by pest control companies as a “green” alternative to chemical methods.

There may be some perception-related obstacles that would need to be overcome as spiders are often wrongly associated with untidy or even unclean domestic environments. It is a myth that they like dirty or dusty places and Pholcus phalangioides will create a new web if the old one gets too dusty.

Arachnophobia is another potential disadvantage for spiders as bio-predators, but their slow, graceful movements are actually not as threatening as the rapid movements of the “big hairy ones” …..and they may even help remove the latter.

On a globally significant note, there may be potential for Pholcus Phalangioides to tackle malaria especially if a nest can be designed to accommodate both spiders and resting mosquitoes.

This article was written by Charles Hippisley-Cox and was runner up in our 2013 CIOB-backed open article competition.

Why would someone not reduce the water content of the effected timber resulting in the larvae dying before they create an exit hole? Natural enemies address the symptom but not the underlying problem, namely: timber susceptible to attack.

One of the key issues with furniture beetle control is that the exit hole remain after the insect has gone leading to later mis-diagnosis of activity and potentially needless re-treatments. This proposed 'solution' does not address this at all. There is also no control in this trial- would the furniture beetle have re-infested the cottage or flown away to lay eggs in timber more likely to support larvae? The implication here is that Pholcus have prevented further damage to the building, but there is no evidence of this.

There is no excuse for surveyors being unable to differentiate between historic and active infestation! Active woodworm is always accompanied by the presence of fresh frass (and the occasional dead beetle on a window sill!).

We are hoping that one of our postgraduate students (subject to funding/sponsorship) will extend the trial ...complete with more rigorous controls. The implication of the informal trial is that spider populations are self-regulating and the arrival of fresh "egg laden" woodworm beetles would provoke a welcome response. During the trial, and in most places where furniture beetles occur, emerging adults fly towards the light and meet potential partners. Spiders jostle for window positions (usually occupied by a large mature females) and will feast on the beetles usually before they have mated.

Regarding moisture levels etc. It might be very difficult in older buildings to sufficiently reduce timber moisture to kill woodworm larvae. It could be done in conjunction with Pholcus as these spiders are particularly tolerant of low humidity.