The consequences of planning reform for Oxford

Note: This article originally appeared in Context 166, published by the Institute of Historic Building Conservation (IHBC) in November 2020. 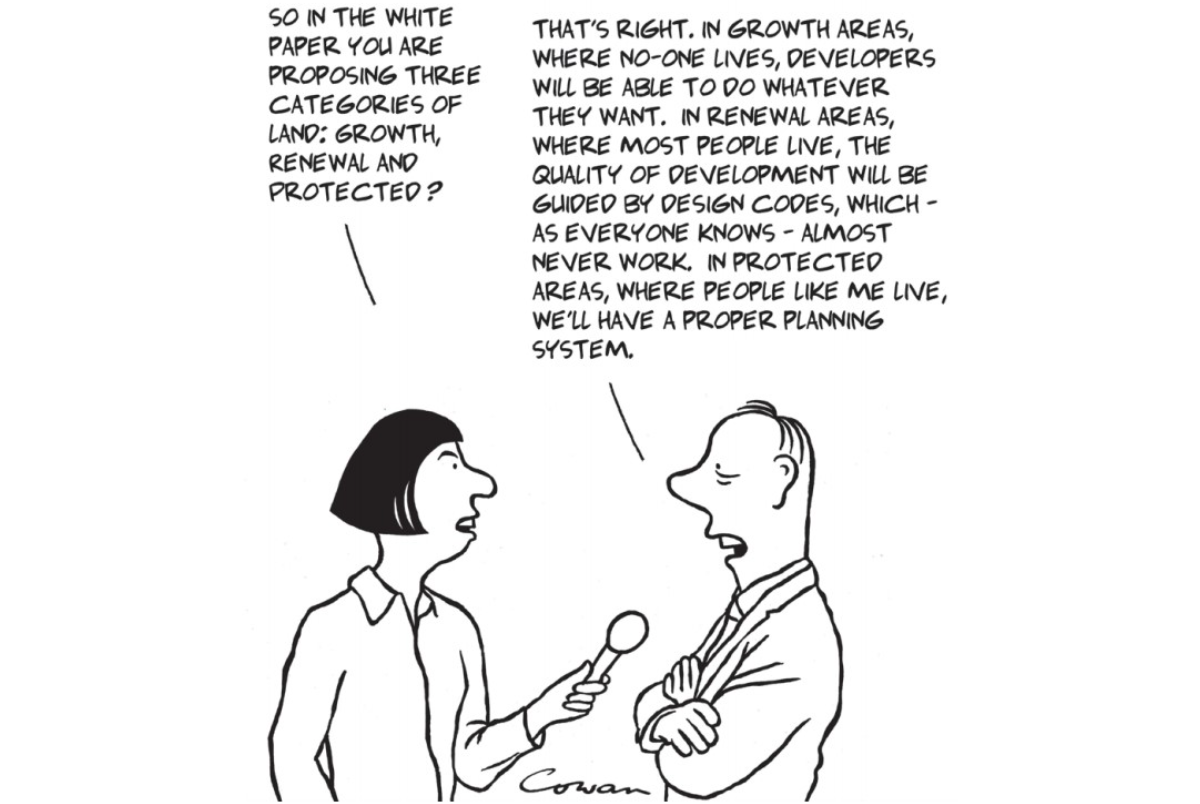 Oxford is an exceptional city. It is not just its heritage that marks it out. Like many towns and cities with restricted boundaries and hedged in by green belts, it is under intense pressure for development and infill. City governments and local people have limited powers to control these pressures. It is important to understand why that is so, and what can be done.

The background to Oxford’s planning problems is well known to its residents, business and visitors. The city is a premium location for business and the knowledge and universities economy - and is in a highly desirable position in the south east, within easy reach of London. At 16 times the average wage, house prices are well above the average, helping Oxford to be one of the least affordable places to live in the UK. Inevitably, there is an acute shortage of social and affordable housing. An additional 32,000 homes are needed to meet housing need in the city, but of course these cannot be found within the city boundaries. Two things follow: first, there is a plethora of pulling down of existing buildings, change of use, and widespread infilling; and second, every possible green space outside the city boundaries is optioned out to volume housebuilders hoping to get a planning consent.

Landownership is thus a potential gold mine. The leading landowners are the university colleges and Oxford University itself, who own much of the land in the city centre and in the surrounding green belt, and the city council, which owns parts of the city centre and the council estates in the south of the city. Other landowners with money to spend are American colleges, sixth-form colleges, and private schools. Almost all of these educational institutions are expanding and investing in their real estate. The community, particularly in the north of the city, is faced with an unstoppable force of educational expansion accompanied by new development for student accommodation.

A recent case of Oxford North development illustrates the powerlessness of local people. St John’s College, owner of a large area of grazing land on the northern edge of Oxford, applied for permission in 2018 to build 90,000 square metres of employment space and 500 homes. Under Oxford City Council planning policy, 50 per cent of the homes would be affordable and 80 per cent of these would be for social rent. St John’s, a historic owner of this open land and an educational charity that pays no tax on profits on trading and sale of property assets, said that if it provided any affordable housing at all, its scheme would be unviable. After local uproar it said that it could provide some affordable housing after all. In the final negotiation St John’s, one of the richest educational institutions in the world, got away with just 35 per cent affordable housing. Local people did their own analysis of the viability reports from St John’s and showed convincingly that the college could well afford to provide policy-compliant affordable housing, but the college was able to manipulate the viability assessment system to show the opposite.

What can the planners do to control or rebalance development in cases like this? The city has just produced a new Oxford Local Plan 2016-2036, and there are two approved neighbourhood plans and two others in preparation. These plans acknowledge the pressures, indeed make the objective of restraining them and making the city more affordable a key goal. That is a start, but a closer examination shows that the plans have few teeth. The laudable objectives are strongly supported by local amenity and housing groups and the civic society, but the detailed policies of restraint and opportunities for alternative development of social housing, or lower-cost employment places, are highly constrained by high land values and, more important, by government regulations that require all plans to conform to national planning policies set out in the National Planning Policy Framework (NPPF). The plans, in other words, are good on broad aims but poor on delivery because the NPPF deliberately limits what local plans can do to control development. Moreover, the city is faced with meeting arbitrary government housing ‘delivery tests’ which it has no power to determine.

That was the situation in 2019. To make matters more complicated, the introduction of a raft of liberalised permitted development rights in 2020, and the requirement for an entirely new streamlined local plan system set out in the Planning for the Future white paper 2020, will throw all existing plans and hard work into disarray. The planning reforms bring in a concept of growth, renewal and protected zones, which will overturn the existing local plan policies. This may be just fine for those areas designated as ‘protected’, as in Oxford’s heritage and conservation areas, but may bring disaster for the rest of the city, where planning controls will be watered down.

The white paper offers a sop in the form of a lengthy set of proposals to establish design codes to be embedded in local plans. But the design and ‘building beautiful’ policies proposed by the white paper will reinforce the prioritisation of the protected areas. It is hard to imagine that the high-minded rhetoric of good design (even if ‘good design’ can be defined) will be applied to the developers and landowners in the free-for-all growth zones outside the city centre and the conservation areas. In any case, even if they can be compelled to bring about good design, this does not produce more affordable homes.

As for local people, their views will be even less important because in the growth zones planning consent will be automatic and elsewhere consultation on individual planning applications will be much reduced. The neighbourhood plans in Oxford, already struggling to influence housing development and the changes of use on high streets, will be almost worthless because they will have little or no influence in the growth zones, nor on the important local high street frontages in Oxford where the new permitted development rules will prevail.

Oxford is arguably an environmentally and socially polarised city already, with the protected heritage part of the city in the centre and the north, and lower-income and less scenic neighbourhoods in the south and east. Outside the city boundaries there are already highly contested potential housing sites. All this will be exacerbated by the planning reforms generating intense planning rows about which sites should be designated for growth. How does this get us anywhere in addressing climate change, healthy cities and socially just development?

The threat to the social and physical fabric of the city does not stop there. The government is to introduce (in 2020) a major reorganisation of local government in England. This will include the abolition of free-standing city authorities like Oxford (which are mostly Labour controlled) and their absorption in unitary authorities based on counties (which are mostly Conservative controlled). It is the new county authorities that will draw up the super-speed local plans. The planning authority for Oxford will not be the city council but a new mega-authority comprising four or five local authorities. Local people will be even further way from controlling what goes in their neighbourhoods. This is a big win for the landowners and the property developers.

Under these circumstances it is even more important that local communities, neighbourhoods and the city council fight back against local government reorganisation and the planning white paper, and step up the fight for the right for local people to participate fully in the planning and housing of their city.

This article originally appeared as ‘Oxford’s impending planning disaster’ in Context 166, published by the Institute of Historic Building Conservation (IHBC) in November 2020. It was written by Bob Colenutt, who teaches town planning at Oxford Brookes University. He is a member of his local neighbourhood forum and the Oxford Community Land Trust. His most recent book is The Property Lobby: the hidden reality behind the housing crisis, Policy Press, 2020.

Retrieved from "https://www.designingbuildings.co.uk/wiki/The_consequences_of_planning_reform_for_Oxford"
Create an article