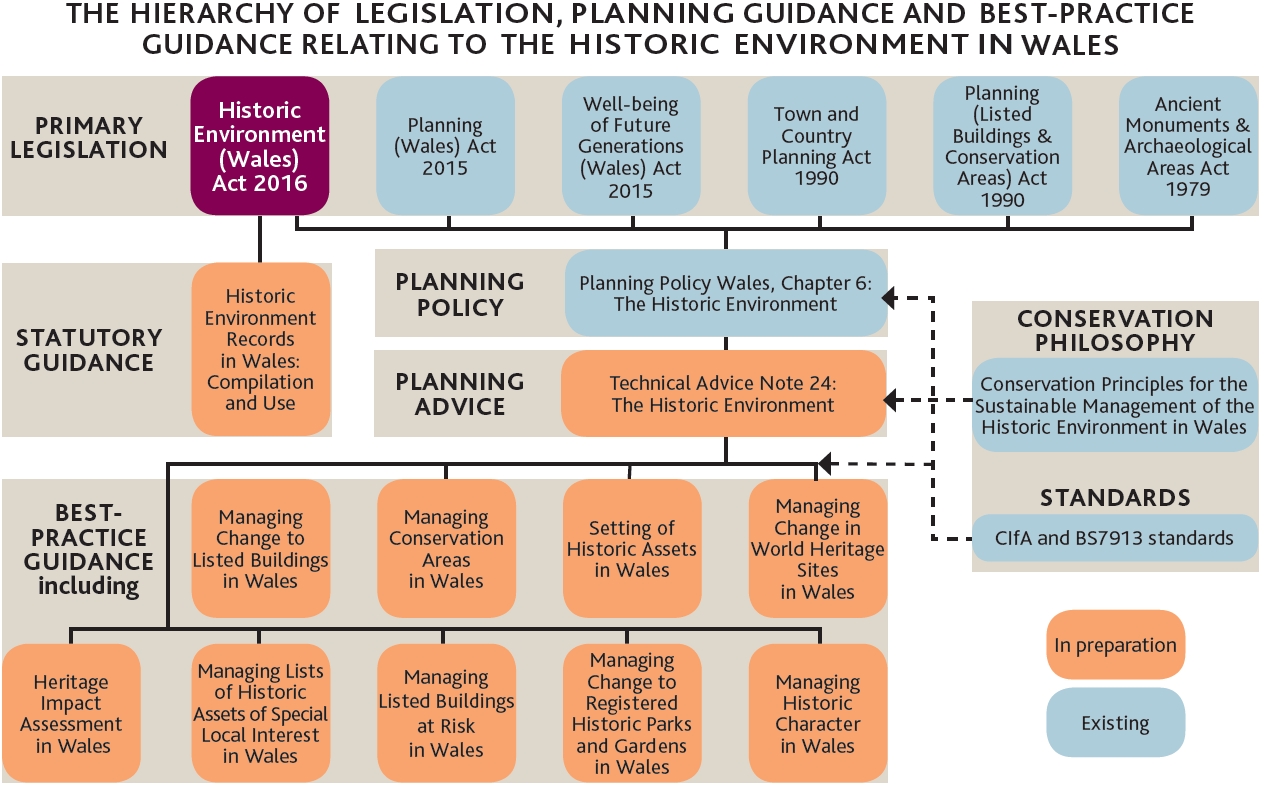 On 21 March 2016, the Historic Environment (Wales) Act 2016, the first legislation enacted specifically for the Welsh historic environment, became law. It had been developed after extensive engagement across the heritage sector, specially-commissioned research and full public consultation.

Informed by this substantial evidence base, the legislation was framed with three main aims:

Under the 2016 act, the Welsh ministers are also responsible for the compilation and maintenance of a list of historic place names in Wales. This reflects widespread public interest in these important elements of the historic environment. Wales will be the first nation in the UK to have such a statutory list. The list, which will be publicly accessible online and through the historic environment records, will raise public awareness of historic place names and encourage their continued use by public bodies and private individuals.

Wales has also led the way in requiring formal consultation with owners and occupiers before the scheduling of a monument or the listing of a building. The proposal to give owners and occupiers a voice in the designation process was widely welcomed during the engagement that informed the 2016 act’s development. However, many people feared that open consultation would place historic assets at risk from unscrupulous individuals who might damage or destroy them to prevent designation. Interim protection was consequently introduced during the consultation period to protect an asset as if it were already scheduled or listed.

To further increase the fairness and transparency of the decision-making, owners and occupiers have been given the right under certain circumstances to ask the Welsh ministers to review a designation decision. The consultation, interim protection and review provisions are expected to come into force during 2017, after regulations for the review procedures have been enacted.

The 2016 act has created parallel structures for scheduled monuments and listed buildings in other areas. Heritage partnership agreements, for instance, have been in place in England since 2013, but only for listed buildings. The 2016 act has now introduced them into Wales and extended them to include scheduled monuments. These are wholly voluntary agreements into which owners, consenting authorities and other interested parties can enter for the long-term management of one or more designated historic assets. Crucially, they can incorporate relevant consents for agreed works.

Heritage partnership agreements will be particularly attractive to owners of multiple assets who need to make frequent, and often repetitive, consent applications. While the negotiation of an agreement will require an initial investment of time and resources from all involved, it will produce savings over time by eliminating recurrent applications and promote the consistent management of the assets. Heritage partnership agreements have not yet been brought into effect, since supporting regulations are required.

Throughout the genesis of the act, neglected listed buildings across Wales troubled both stakeholders and members of the National Assembly. Local authorities had statutory powers to deal with deteriorating listed buildings, but financial risks and the threat of legal entanglements often made them reluctant to use them. For instance, local authorities could use existing urgent works powers to take emergency action to preserve a listed building, but only if it was unoccupied. Moreover, although an authority could recover its costs, there were no specific mechanisms for it to do so.

The 2016 act has broadened the scope of urgent works, so they can now be used on any listed building if they do not unreasonably interfere with residential use. Perhaps more importantly, the legislation has also made the costs of urgent works a local land charge and permits an authority to levy interest on any outstanding sums. This move seeks to reduce the financial risk of urgent works for local authorities. It will give them various means for the recovery of their expenditure including, if necessary, enforced sale. The provisions for the recovery of costs will come into effect once regulations for the rate of interest have been put in place.

During the passage of the 2016 act, assembly members supported an amendment to give the Welsh ministers powers to create ‘preservation notices’ to give local authorities new measures to deal with listed buildings that have fallen into disrepair. The legislation makes specific provision for the use of civil sanctions to support the notices, which would allow fixed financial penalties to be imposed on owners who permit listed buildings to decay. Although the act defines a framework for preservation notices, including offences and appeals, detailed drafting will be informed by further research and consultation with the historic environment sector.

Throughout the legislative process, stakeholders repeatedly stressed that new regulations, planning policy and advice and supporting best-practice guidance would be no less important for the historic environment than the primary legislation. Accordingly, from its earliest development, the 2016 act has been the central component of an integrated body of measures to support the careful and sustainable management of change in the Welsh historic environment. This fundamental ethos is derived from Conservation Principles for the Sustainable Management of the Historic Environment in Wales, published by the Welsh Government’s Historic Environment Service (Cadw) in 2011.

A central tenet in Conservation Principles is that decisions about the future of a historic asset must be based on a sound understanding of its significance. This has influenced proposed regulations to replace design and access statements with heritage impact statements in the listed building consent application process. A heritage impact statement will require a thorough evaluation of a building’s significance to be followed by a structured assessment of the objective of proposed works, design and access considerations (where appropriate), and strategies to mitigate any impacts.

Since the planning system plays a significant role in the management of the historic environment, it was clear at an early stage that changes made by the 2016 act would have to be reflected in Planning Policy Wales. This afforded an opportunity for a thorough revision of the historic environment chapter (chapter 6) so that it would also embody essential messages from Conservation Principles. After a public consultation, the revised chapter was issued in Edition 9 of Planning Policy Wales in November 2016.

Coinciding with the work on Planning Policy Wales was the preparation of Technical Advice Note 24: The Historic Environment. This, the first technical advice note for the Welsh historic environment, covers all circumstances in which the planning system touches upon the management of historic assets.

Cadw has been preparing a wide range of best-practice guidance, both to complement the introduction of the legislation and to support the management of the historic environment more generally. Two tranches of guidance were released for public consultation in 2016 and final versions will be published on the Cadw website during 2017. The documents, aimed at various audiences, cover topics ranging from the setting of historic assets, through the management of conservation areas to the creation of lists of historic assets of special local significance.

Two titles of special interest are Managing Change to Listed Buildings in Wales, aimed principally at owners and agents, and Managing Listed Buildings at Risk in Wales, aimed at local authorities. The latter explores the critical relationship between a building’s condition, use and ownership, and how the careful balance between these elements can be managed to create a sustainable future. It also explains the statutory powers that can be used to protect listed buildings at risk where appropriate.

The Historic Environment (Wales) Act 2016 and the measures that have been, and will be, developed to support it will give Wales a robust structure for the effective protection and responsive management of its precious historic environment. That, in turn, will furnish a stable foundation for the development of coherent legislation and policy for the future.

This article originally appeared in IHBC's Context 148, March 2017. It was written by Gwilym Hughes, chief inspector of ancient monuments and historic buildings for the Welsh Government’s historic environment service (Cadw).

Retrieved from "https://www.designingbuildings.co.uk/wiki/The_Historic_Environment_(Wales)_Act_2016"
Create an article