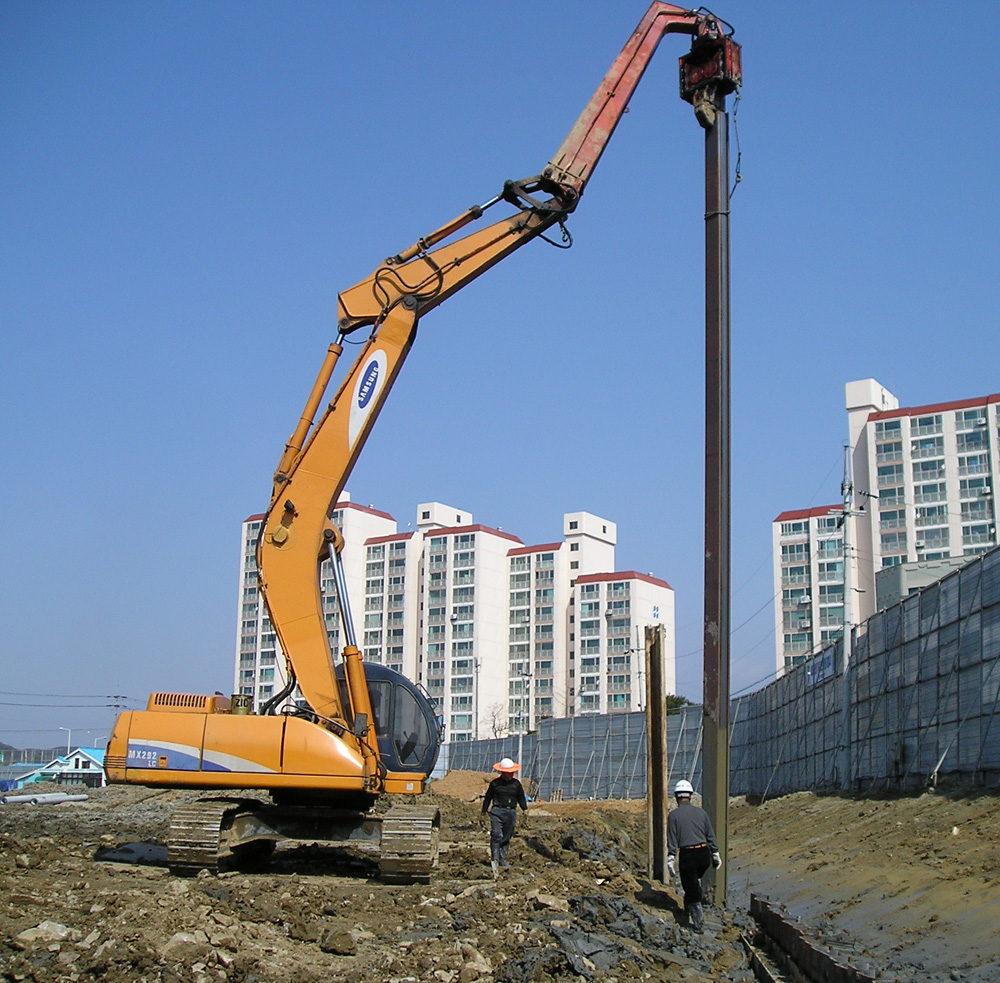 Piles are formed by long, slender, columnar elements typically made from steel or reinforced concrete, or sometimes timber. The type of pile will determine the pile driving equipment that is most suitable. Other determining factors include; height, manoeuvrability on the site, surface conditions, obstructions such as existing surfaces, and so on.

Piles may be replacement or displacement:

Bored (replacement) piles require rotary augering equipment. The piling rig is equipped with a telescopic arm or bar known as a Kelly bar which slides vertically and holds a short length of auger or a digging bucket on the end of it. The auger is a drilling device that usually includes a rotating helical screw blade. When the auger or bucket is rotated it excavates the ground. The bar is then retracted, the rig slewed, and the excavated material ejected by spinning the Kelly and tool rapidly.

Driven (displacement) piles require pile drivers. These can be either percussion, hydraulic or vibratory drivers.

These are commonly types of hammer designed to deliver an impact blow to the top of the pile. The type of subsoil and pile will determine both the hammer weight and the drop height. A steel helmet padded with a sand bed and cushioned with a ‘dolly’ (plastic or hardwood block) is used to protect the pile head from damage.

The main types of hammer used in pile driving include:

This is a block of iron which is dropped from a rig attached and suspended by rope. The weight typically ranges from 0.75-3 tonnes, and the number of blows which can be delivered with a free fall of 1.2-1.5 m ranges from 10-20 per minute.

These use compressed air and are either single-acting or double-acting.

Single-acting air hammers are semi-automatic and consist of a heavy failing cylinder sliding up and down a fixed piston, raised by steam or compressed air. The hammer is suspended from a crane and guided by leaders in the piling frame to maintain position relative to the pile head. The hammer rises and falls with the admittance and exhaust of compressed air through valves. Blows delivered can range from 36-75 per minute.

Double-acting air hammers consist of a cast iron cylinder remaining stationary on the pile head while the hammer delivers a series of rapid blows using compressed air. While the force of the hammer is less than that of a single-acting hammer, the number of blows is much greater (ranging from 95-300 per minute). This type of hammer is suitable in situations where the use of a conventional hammer is prohibited by reduced head-room.

These are self-contained units suspended from a crane or slide-in leaders rested on the pile head. A falling cylinder of steel within the unit generates the driving action, raised by the explosion of gas from the automatic injection of fuel. The cycle continues until the fuel is cut off. Hammers weigh from 2-6 tonnes, and the number of blows ranges from 40-60 per minute.

Vibratory drivers are used to vibrate the piles, reducing the surrounding ground resistance, and allowing them to pass into the ground. Depending on the nature of the soil the vibrations can be either low or high frequency, although they should not be used in heavy clays as the vibrations tend to be dampened. The vibrators are driven by diesel-hydraulic power units.

The speed and method of extraction will depend on factors including:

Pile extractors deliver a rapid number of upward blows which cause the extracting jaws to grip and lift piles out of the ground. Alternatively, a double-acting hammer can be inverted for use, working on the principle of hitting the pile out of the ground.

Retrieved from "https://www.designingbuildings.co.uk/wiki/Piling_equipment"
Create an article