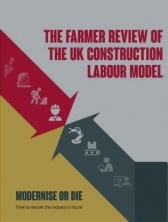 In October 2016, a new industry report was published which concluded that the construction sector must ‘modernise or die’.

‘The Farmer Review of the UK Construction Labour Model’ was commissioned in February 2016 by the Construction Leadership Council at the request of the government. Led by CEO of Cast Consultancy, Mark Farmer, the report investigated the current labour model and proposed actions to safeguard the industry’s future.

The report suggests that the UK’s construction industry faces ‘inexorable decline’ unless longstanding problems are addressed. In particular, the review highlights the sector’s dysfunctional training model, its lack of innovation and collaboration, and its non-existent research and development (R&D) culture. It finds that high levels of cost inflation, driven by labour shortages, have caused numerous housing schemes to stall as their costs have risen prohibitively.

As more people leave the industry each year than join it, the construction workforce is shrinking, placing increasing constraints on its capacity to build housing and infrastructure. However, there is little incentive for contractors to invest in long-term training when they are increasingly reliant on a fractured supply chain and self-employment.

Figures from a 2016 YouGov poll confirm suspicions that school leavers and graduates do not view construction as an attractive career choice (the poll found that two-thirds of Britons wouldn’t consider a career in construction). Brexit could make this situation even worse if it results in reduced migrant labour.

The solutions, according to Farmer, lie in the need to better align the requirements of construction firms and the businesses who hire them.

The review sets out 10 headline recommendations:

Expanding on these recommendations, Farmer said:

“If you buy a new car, you expect it to have been built in a factory to exacting standards, to be delivered on time, to an agreed price and to a predetermined quality. This needs to happen more in construction, so that the investors, developers or building owners hiring construction firms increasingly dictate the use of modern methods of delivery and invest appropriately in the skills agenda to grow this part of the industry. There are more similarities between manufacturing and construction than many people are led to believe and this perception needs to change, starting in the housing market.”

"The challenge the report sets us is to do things differently – to reduce the reliance on building in the same way that we have for decades if not centuries, with its heavy demand for on-site labour. We will not have the labour force to deliver what the country needs by working in those ways, and those ways will not create enough added value for clients or suppliers to allow construction firms to prosper, and make those investment in our people and performance. As the report says, this is a challenge for all."

On 19 July 2017, government ministers David Prior, Alok Sharma and Anne Milton issued their response to the report, endorsing most of its findings.

With regard to the recommended overhaul of CITB, they said:

'We also agree that the CITB needs to be reformed. The CITB is now embarking on a major reform programme ... Government supports the direction of these reforms, and we hope that the CLC will play an active role in supporting the CITB to see them through.'

While agreeing with most of Mark Farmer's recommendations, they disagreed with the idea of a charge of up to 0.5% of the value of contracts to be levied on clients who refuse to reform voluntarily. The ministers said:

'Government agrees that involvement of the construction industry’s clients in addressing under-investment in skills and innovation is crucial to improving the sector’s productivity. However, the introduction of a client charge to encourage and fund modernisation could risk damaging developer confidence and increasing costs, at least in the short term.'

Farmer responded to the ministers by saying:

“I am delighted with the government’s positive response to the findings and recommendations set out in my review.

“I also feel that industry itself is becoming increasingly aware of the unprecedented challenges it now faces and I believe this ‘burning platform’ is starting to accelerate its own thinking in how it embraces modernisation, albeit this also needs to be supported by the clients that the industry serves.“

You can read the full government response here.

In an article published in Construction Manager in 2021, 'Five years on from Modernise or Die, where are we now?' Mark Farmer wrote: "In the years since I published the Farmer Review, lots has happened and I take heart that we have stirrings finally within industry that all is not well under the bonnet, combined with clear evidence that some businesses are pivoting to different models to secure their future."

Hello, nicearticle! I agree that shrinking size of construction industry is a problem. We also wrote an article that cites Mr. Farmer about modernization. Feel free to check it out. https://geniebelt.com/blog/modernise-or-die