The CIne building, located in Lugo, has obtained a BREEAM Outstanding rating. The building is energy self-sufficient and is also able to disconnect from the electricity and gas grids without affecting its performance. 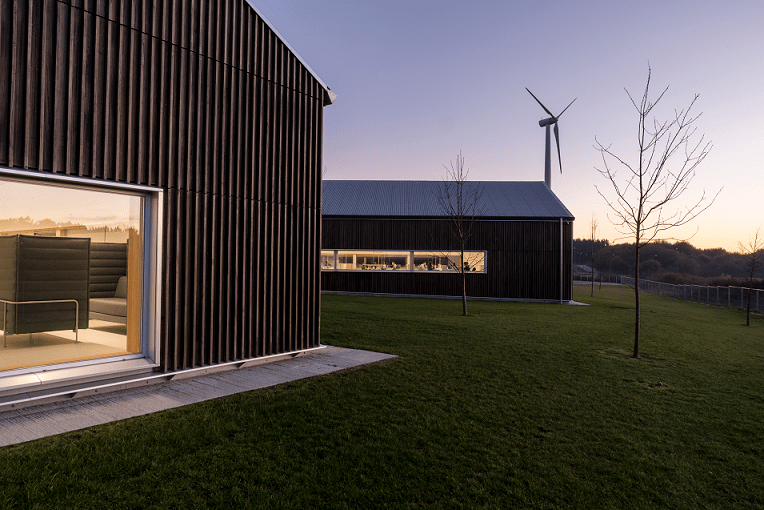 The CIne building (Norvento Enerxía Innovation Centre) is one of the most advanced in the world in terms of self-generation and energy independence through renewable energy. The headquarters of Norvento, a Spanish renewable technologies company located in the city of Lugo, has a surface area of over 4,000 sq. m, and the capacity to house up to 200 workers.

As a result of the innovation credits achieved in the design phase, CIne has achieved a BREEAM ES Outstanding and has become the highest scoring office building in Spain.

To achieve this rating, the project has undergone a rigorous sustainability review that includes up to 49 requirements divided into 10 categories such as Energy, Water, Health and Wellbeing and Management. The BREEAM Assessor Ángel Luis Teso Alonso, from Exeleria a consulting firm, was responsible for the evaluation.

One of its most important innovations is the energy autonomy of the building. All of its energy needs – both electricity, heating and cooling – are obtained from different renewable sources on site, allowing the building to operate autonomously, completely disconnected from the electricity and gas grids. This is possible in part by the integration of batteries, which allow energy to be stored during times of high production, and used when production falls.

To supply energy to the CIne, the project design has combined a micro electric grid with a thermal grid, which allows the building to be more energy-efficient.

These networks, together with a complex energy storage system made up of electric batteries and a thermal storage system, are monitored 24 hours a day thanks to an advanced control system that allows the generation, storage and consumption to be managed in real time, with the aim of optimising the use of available solar and wind energy.

The microgrid combines wind power, solar panels, and cogeneration that uses recycled vegetable oil. On average, 35% of the energy comes from wind, 60% from the sun, and 5% from vegetable oil.

For the production of wind energy, the first unit of the new wind turbine nED100 has been installed in the CIne building, with a capacity to generate up to 400 MWh per year. This new version of the turbine designed by Norvento for industrial self-consumption has been optimised and improved to obtain better performance in high and turbulent wind conditions.

In addition, 165 kWp solar panels have been installed on the roof of the car park. It also has 5 charging points for electric cars that can be extended to 28 in the future, which will cover more than 90% of the energy needs of the company’s fleet.

Moreover, the micro thermal network for air conditioning includes a radiant floor heating system fed by two geothermal heat pumps of 52 kWt each, supported by a cogeneration system capable of delivering up to 90 kWt. This cogeneration system only starts operating after long periods of sun and wind scarcity. The recovery of heat and cold by means of a forced ventilation system with air recirculation and other measures such as heat recovery in certain places such as the company’s data centre, have also been taken into account.

Thanks to the development of these technologies, Norvento has turned its headquarters into the leading BREEAM office project in Spain. 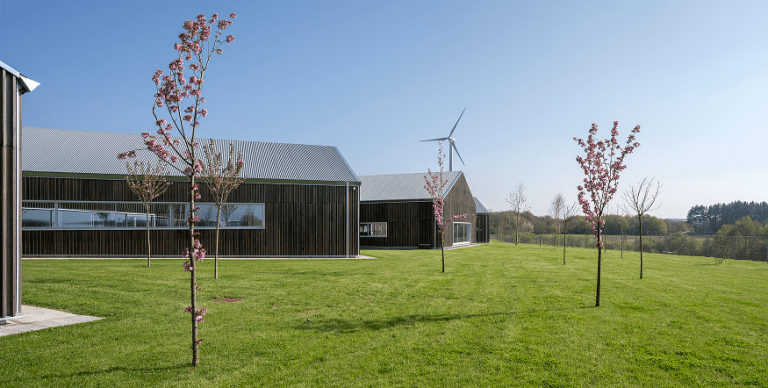 In addition to its excellent energy-saving performance, achieving the highest BREEAM rating requires compliance with a large number of requirements in other categories. The CIne building stands out for its energy efficiency, but health and wellbeing has also been a keen priority, as it has been designed to ensure the health and comfort of its employees.

The architectural design, the work of Francisco Mangado, combines aesthetics and practicality, prioritising open spaces, pure lines and fluidity between welcoming work environments, to favour the comfort of workers.

The layout of the different structures of the building has been planned so that all the workspaces have a view of the outside, facing the extensive garden surrounding the building. In addition, this gives priority to the entry of natural light, which is much more beneficial for the eyesight and performance of employees.

[edit] Building integrated with the environment

The CIne building has been conceived from its earliest design phase to be a zero-energy building, aimed to promote a new, more efficient and environmentally friendly energy model. The optimised orientation of the building, the reuse of greywater, its thermal insulation and the use of natural light makes the building save resources and avoid the emission of more than 160 tonnes of greenhouse gases into the atmosphere each year.

In the same line of commitment to sustainability, the building materials of the CIne building have also been chosen to encourage integration with the environment. Thus, for example, eucalyptus wood, a widespread species in Galicia, has been used to cover the building.

In addition, Norvento headquarters is integrated into a large green area where employees can relax, and whose biodiversity will be increased with the inclusion of new plant species. 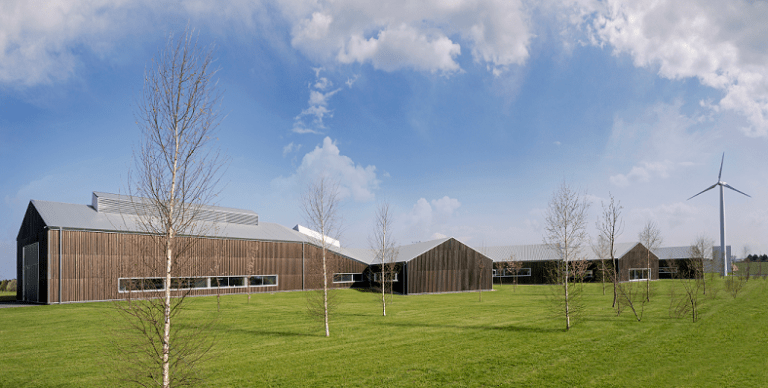 [edit] A model of change for the future of sustainable construction

Mariluz Lozano Cerezo, Norvento’s Director of Environment and Procedures, highlighted the pioneering nature of the project, as she said;

“...betting on energy self-sufficiency in a building of these characteristics is a very significant technological and innovation challenge. This building will be a milestone in the change of energy model that will become widespread on a global scale over the next few years.”

The CIne building is an example of how a well-designed project from its design phase can integrate the latest technology in sustainability and energy efficiency. With all this, companies opting for this model of construction will not only respect the environment and the wellbeing of users, but will also see drastic reductions in energy consumption costs.

This article was originally published here on 4 July 2018 by BRE Buzz.

Retrieved from "https://www.designingbuildings.co.uk/wiki/CIne_building,_Spain"
Create an article