This article was written by Ilka May, Associate Director at Arup and Managing Director at planen-bauen 4.0. 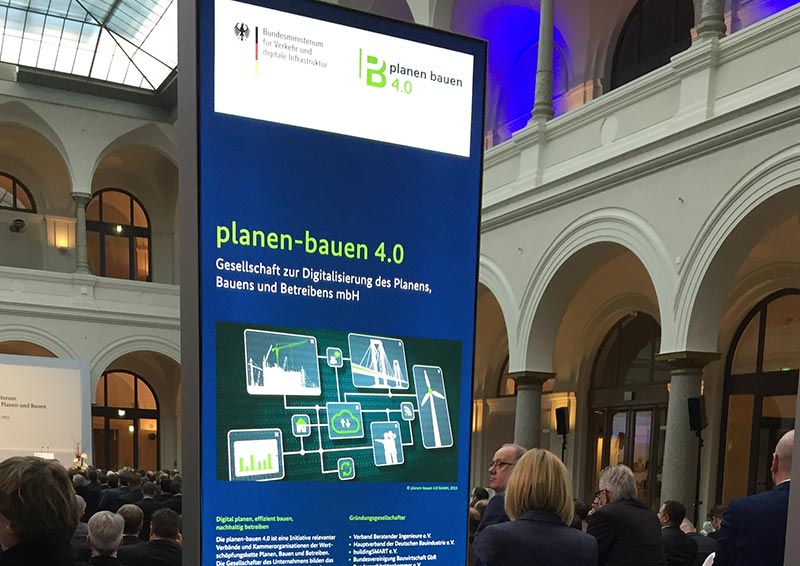 Germany has one of the most competitive manufacturing industries in the world. Over the past 30 years or so, the IT revolution has brought about a radical transformation of the world in which we live and work, with an impact comparable to that of mechanisation and electricity in the first and second Industrial Revolutions.

Now, the introduction of the Internet of Things and Services into the manufacturing environment is ushering in a fourth industrial revolution with a great business potential: Industrie 4.0.

Although the potential benefits of increased digitalisation are generally undisputed, the change that it introduces also creates a feeling of uncertainty with clients and suppliers alike. Small and medium enterprises – the engine room of Germany's economy – have particular concerns regarding their ability to cope with the dynamics and pace of digitalisation.

The lack of a consistent demand from the public sector client base in combination with a lack of clarity regarding methods and terms leads to a general reluctance to embrace the digital methods which are advancing internationally at a very fast pace.

Awareness is beginning to rise across industry that a step change is required in pace and behaviour, if Germany doesn't want to risk falling even further behind other nations in Europe and beyond. Some recent spectacular major project failures, like the airport in Berlin or the central train station in Stuttgart, have fueled that debate and triggered some actions.

[edit] A strategic road map for BIM in Germany

One milestone when it comes to BIM was the launch of a strategic Road Map for BIM for the transport infrastructure sector in Germany by the Federal Ministry for Transport and Digital Infrastructure (BMVI) in December 2015.

This internationally aligned plan, developed by the industry-led initiative planen-bauen 4.0, has been designed to facilitate the target that BIM is to be applied on all new projects in Germany from end of 2020 onwards. A phased mobilization period prior to 2020 is intended to lay the foundations and allow for the development of capability and capacity in the market.

At a strategic level, the Road Map comprises a guiding principle, a hypothesis and a vision for the German construction industry in the digital age. At an operational level, the plan describes a defined "Performance Level 1" for the use of BIM on construction projects, including a reference process for creating, managing and sharing digital data.

The consistent application of this reference process can unlock the often envisaged benefits of BIM, such as increased planning security, transparency and efficiency, in a low-risk and cost-efficient way. This report also suggests giving the market sufficient lead time to prepare for future demand.

In addition to the reference process for data and information management, the Road Map defines a minimum criteria for a first maturity level of BIM use, called Performance Level 1. These criteria include the specification of clients' data and information requirements as part of the procurement process and the development of a BIM Execution Plan, outlining how the requirements will be met by the project team.

Project-specific BIM objectives and their corresponding BIM use cases and activities form an important part of the BIM Execution Plan in order to identify wasteful and non-value-adding activities.

A lossless and secure data exchange between all the parties involved, across all phases of design and construction, is paramount. In addition to the processes required to achieve this, vendor-neutral data exchange formats have been defined as additional Performance Level 1 criteria. The aim is to ascertain and sustain independence from software products and tools.

[edit] Ever more integration and collaboration

Performance Level 1 for digital processes and technology in the construction value chain is intended to lay the foundations and set the stage for an even more integrated way of working in an open and collaborative data environment. It is intentionally designed to deliver better products and data with software and tools available today and particularly under the currently existing policy, procurement and legal framework in Germany.

In the future, data and information will come to the fore, instead of software and applications. Future requirements, following on from Performance Level 1, need to focus on improving the functional performance of assets. The saving potential for the operating phase of an asset exceeds that for the design and construction phases many times over.

In an increasingly data-driven and digitalised built environment, this potential is yet to be exploited.

This article was published as ‘Germany moves forward on its BIM journey’ on 21 July 2016.

Retrieved from "https://www.designingbuildings.co.uk/wiki/BIM_in_Germany"
Create an article