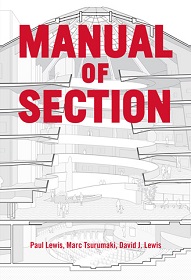 If there is a definitive framework out there for describing and evaluating sections, then ‘Manual of Section’ is probably it. Developed by the 3 principals of LTL Architects – Paul Lewis, Marc Tsurumaki, and David J. Lewis – the book explores different types of section and what effect they have on form, space, material, and program.

The book opens with a statement that the work ‘has been motivated by the belief that the architectural section is key to architectural innovation’, before proceeding to examine its history and formal types.

They highlight the uniqueness of the section as a representational tool, allowing architects to gain a better understanding of a project’s structure, scale, proportion, materials and geometric logic.

They identify seven categories of section:

The 63 projects featured in the book are organised into one of these categories, with additional examples classed as hybrids, indeed, as they make a point of stating, ‘buildings rarely exhibit section types in isolation’.

The heart of the book is its double-page spreads, featuring some of the most famous buildings of the 20th and 21st century, through which the authors demonstrate different types section in application. They eschew the use of plans, elevations and renders in favour of exclusively vertical cuts, represented in one-point perspective. The sophisticated spatial hierarchies and interplays between interior and exterior are therefore imbued with an unusual and welcome lucidity and focus.

The real joy for architects in sifting through this book will be in scrutinising familiar buildings from a completely new perspective. In many ways it brings to mind Stephen Biesty’s wonderful illustrated cross-sections of castles, ships and such like.

As well as being a useful and engaging reference book for students and professionals, it would also make an excellent gift for any architect or interior designer.

You can find out more and purchase the book here.

Retrieved from "https://www.designingbuildings.co.uk/wiki/Manual_of_Section_-_review"
Create an article