BIM for Dummies - an interview 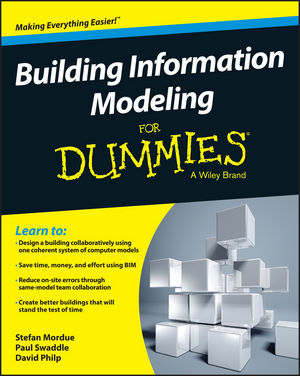 In October 2015, Wiley published the first edition of 'Building Information Modeling for Dummies', a friendly, hands-on guide aiming to get readers up-and-running with BIM.

Two of the book's authors, Stefan Mordue and Paul Swaddle, both of NBS, gave an interview to Designing Buildings Wiki.

What made you feel it was necessary to write a 'BIM for Dummies' book at this time?

Both Paul and I had an interest in technology and processes, and in 2014 I'd co-authored a book called 'BIM for Construction Health and Safety'. Following that I was approached by Wiley regarding this particular publication, I looked at the type of audience it was aimed at and it was certainly not a topic I thought I could tackle by myself. So I gave Paul a call, and David Philp from the BIM Task Group, because we all have different backgrounds and could all contribute something different.

What from each of your backgrounds did the three of you bring to the project?

We all come from quite varied backgrounds in terms of the work we've done in practice. David brought more contractor knowledge, Stefan's worked on some large projects, and I come more from the domestic, small scale sector. I think we all had an interest in new technologies, particularly Stefan with his knowledge of the Standards, but we all brought our collective interests to the book.

Do you think there's a need for new type of independent adviser to help set up BIM at the beginning of projects?

It's rapidly becoming a specialised subject area but it doesn't necessarily have to be. Of course there's the role of the Information Manager set out in the CIC Protocol who doesn't have any design responsibilities as such but is there to coordinate the information and in some cases host a common data environment. I think over the coming years there'll be a need for somebody to advise the client and do a bit of hand-holding I would suspect.

It's interesting how many jobs have become specialisms, and I think what we'll see over the next few years is an evolution of that into a role that spans beyond BIM Level 2 and the principles of that engagement, to the way that information is used in the construction industry and the way that data is managed, handled and exchanged; I think that'll evolve beyond a specific BIM job role.

Do you think BIM models will actually be used by clients after buildings are completed? Will clients find it difficult to engage with BIM?

The real value proposition is in the digital model, so today's clients aren't just procuring a physical asset. In the past we tend to use models just for 3D visualisation purposes, and that for the BIM process, the 3D visualisation is really just a by-product of the process, the value proposition is having a data-rich model at the end of the project which can then be used for the ongoing maintenance over the lifecycle of the building. So I think that's where the value is because if you look at where the real cost savings lie it's certainly not in the design and construction, it's in the operating of an asset over its maintainable life.

The other thing is that the government's mandate is an indication of a client's desire, and three-quarters of the industry think that the government are going to specify that in the way that they say it in the Construction Strategy document, that if they're pushing for that and they see the value they are going to get out of their assets over the lifecycle of those buildings then clients will begin to see the benefits I think. There will be clients who won't require BIM; what was interesting about the latest BIM survey that NBS did was that a lack of client requirements was actually seen as a barrier to BIM adoption, so it needs to be driven by clients in quite a lot of ways.

Is it the case that up-front costs of BIM are being offset by reduced out-turn costs?

I don't think we're necessarily there yet. There are a number of projects that have demonstrated their savings in construction, certainly in the early stages of an asset's lifecycle. But I'm a believer in the fact that we will see that maintainable and operational benefits very clearly and that will be the driver for people to adopt these processes.

If we look at where these stated cost savings of 15-20% have actually come from, these aren't actually new figures, they're going back to the 1970s, research that the BRE have undertaken and the Government's Avanti project, where they've demonstrated that cost savings can be derived from using core information, not having to rework information, better quality information that's right first time. So this is based on factual evidence that spans a number of decades.

How do you think things are looking with regard to the implementation date of April 2016?

I think the foundations are now in place. There are a complex suite of standards, guidance and protocols, there's the Uniclass 2015 classification that is not just for buildings but also applicable to rail, infrastructure and other sectors. All these components are in place now.

The fact that we've just emerged from recession to a point where people are in such demand that there's now a strain on resources makes it important to realise that there are a lot of competing priorities and that the April 2016 date isn't forgotten in the midst of everything else that's going on. I think there'll be a real push for new efficiencies, a push for better drawings, faster work, and BIM does have the ability to deliver these kinds of savings.

What do you see as being the biggest obstacles facing BIM currently?

I would say it's the behavioural change programme more than anything else. We tend to focus a lot on technology and process and perhaps forget the people element. Taking BIM out of the equation, any changes to process, technology or day-to-day working can affect us as humans. We all react and learn in different ways so it's a case of managing staff expectation, making sure they are getting all the support, training and education to adapt to new ways of working.

I think there's a massive appreciation of the skills shortage across the industry, it's not just in terms of BIM skills and information management jobs. I think we need to appreciate there's a huge amount of investment required to bring construction up to the standard of a lot of other industries that we are looking at and trying to evoke. We're finding that clients do drive it forward and certainly government is doing that. If people do put the time and investment in, I think the construction industry can do something it can be really proud of.

What does the future hold for BIM and where do you see it going in terms of different sectors and companies? And how long do you envisage it being before a 'BIM for Dummies' book is simply no longer needed?

From the future side it's an incredibly exciting time for the industry. I've never understood why construction isn't a cleaner industry, why there isn't more off-site work, more quality control before things arrive on site, and I think we're seeing a great shift towards these kinds of manufacturing processes.

But also, there's the technology aspect in terms of virtual and augmented reality, and one of the best ways to demonstrate that is how clients are being engaged in the asset lifecycle process through the use of these new technologies.

I think in response to the second half of that question, there'll always be a time for people who aren't necessarily familiar with the industry to be able to understand some of the jargon, aspects and specifics of what we do. We can sometimes be quite a closed industry, so opening that up to clients, the users of buildings, to show how their information can be utilised more effectively, I think is the real key. It's a book for anyone to engage with BIM regardless of their background so I hope it will always be a useful tool.

The book's tag-line is 'Make everything easier', and that's what Paul, David and I set out to achieve really. Paul mentioned presenting jargon-free information and forgetting all the spin. It's about providing step-by-step instructions that lead people in the right direction for further information, because starting any kind of BIM journey can be overwhelming and it's intended to give people a head-start and set them off in the right direction.

You can buy 'BIM for Dummies' here on Wiley's site.

You buy buy 'BIM for Dummies' here on RIBA Bookshops.

Retrieved from "https://www.designingbuildings.co.uk/wiki/BIM_for_Dummies_-_an_interview"
Create an article