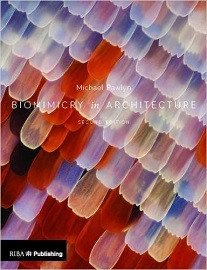 ‘Biomimicry in Architecture’, released in its second edition in October 2016, is a thoroughly absorbing and illuminating examination of how biomimicry might transform the built environment.

As an architect who was central to the team that re-invented horticultural architecture for the Eden Project, Michael Pawlyn is perfectly placed to compile a book on biomimicry, being widely regarded as something of a pioneer in the field.

He begins by defining biomimicry as ‘design inspired by the way functional challenges have been solved in biology’. He paints a picture of biological organisms embodying technologies that have benefitted from a 3.8 billion-year research and development period; in comparison with which, humankind can only feel a degree of humility. He explains that we should see biomimicry as being one of the ‘best sources of solutions that will allow us to create a positive future’ and shift from the industrial to the ecological age.

The book benefits from Pawlyn’s clear and engaging writing style, which is translates complex systems into jargon-free explanations. Where jargon is unavoidable, he helpfully unravels it, such as with the definitions and distinctions between biomimicry and, say, biomorphism - more of a ‘formal and aesthetic expression’ rather than the former which is ‘a functional discipline’.

However, the lack of a more detailed theorising of how biomimicry might connect with modernist and post-modernist architecture may disappoint those looking for a way of placing it in the context of these more conventional movements as a viable solution for the future.

Through several ‘how’ rather than ‘why’-based chapters, Pawlyn explores elements such as hollow tubes, skeletons, exoskeletons, webs/tension structures, pneumatic structures, deployable structures, and how they can be replicated in the built environment. The book explores such problems as how buildings can be powered, how to create zero-waste systems, and, most interestingly, how we can manage water by drawing inspiration from creatures such as the Namibian fog-basking beetle.

The real joy of the book though is the bountiful images which, with nature and architecture placed so well next to one another, make the future of biomimicry seem full of wonder and potential. Pawlyn concedes that biomimicry has yet to capture the imagination of the profession as it has in industrial design for instance, but no doubt any architect or designer who picks up this book will come away wondering why and for how much longer?

Retrieved from "https://www.designingbuildings.co.uk/wiki/Biomimicry_in_Architecture_-_review"
Create an article