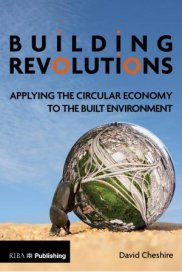 ‘Building Revolutions: Applying the circular economy to the built environment’

It is predicted that by 2030, 3 billion people who are currently living in poverty will have a middle class level of consumption. This will create a surge in the demand for natural resources by at least a third.

With these forecasts in mind, and with the construction industry playing such an important part in global resource demand, experts are increasingly looking at strategies for moving the built environment away from the linear economy of ‘make, use and dispose’, sometimes more disparagingly described as 'make, break and discard'.

The more effective model, according to the book by David Cheshire, a Regional Director at infrastructure services firm AECOM, is that of the ‘circular economy’. This follows the basic principle that where resources are kept in use, their value is retained.

In the circular economy, everything is engineered to be constantly reused or recycled. It requires rethinking of design, manufacturing, selling, re-using, recycling and consumer ownership to keep resources in use for as long as possible.

Cheshire asserts that embracing principles of the circular economy could yield a number of benefits to the construction industry, in terms of cost, efficiency and environment. Although he acknowledges that as buildings are not ‘manufactured’ in the same way as consumer products, it is more of a challenge to apply the circular economy model.

With this in mind, the overarching philosophy of the book is to put thought into the future destiny of the building and the legacy that it leaves for following generations. It should not inhibit design, but be used as a catalyst and inspiration.

The book argues that redefining waste as a resource means that costs can be reduced, and companies can be protected against volatile prices associated with raw materials; perhaps mindful of the recent ‘steel dumping’ on the part of China that has had such a negative impact on British steel manufacturers.

The book makes the point that buildings could be adapted, reconstructed and deconstructed, and made from materials that can be reused or recycled, helping create a regenerative built environment. Indeed, designing for deconstruction is ‘an essential piece of the circular economy puzzle’.

The idea of designing in layers helps to unlock the tricky problem of applying the circular economy to buildings, by allowing designers to approach each building element according to its own circumstances.

Building for adaptability is another key principle of the circular economy and a growing trend, according to the book. This approach gives building owners a flexible portfolio, helping them react to changing market needs. A building with a flexible interior within its existing envelope, for example, could be easily adapted from office to hotel space if required.

Cheshire’s book is concise, well-illustrated and easy-to-understand, and serves as an informative introduction to a subject that should be gaining far more attention and inspiring much more focus within the industry.

Retrieved from "https://www.designingbuildings.co.uk/wiki/Building_Revolutions_-_review"
Create an article