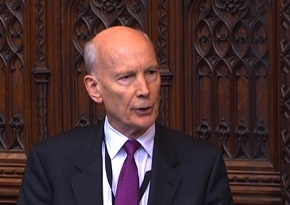 In a recent House of Lords debate about the government's industrial strategy ICE President Lord Robert Mair welcomed the government's white paper as a much needed document that emphasises collaboration between government, business, science and technology.

He updated the House on the recent launch of three government infrastructure reports, which took place at ICE's headquarters, One Great George Street. The reports, he said, all recognised the urgent need to improve performance of our infrastructure to help boost the productivity of the industry and deliver better outcomes for society.

He went on to praise the Construction Leadership Council's pursuit of ensuring that the Construction Sector Deal was in the first round of deals announced in the white paper - one that could potentially transform the construction industry.

He also discussed the importance of looking at the theme of digital technology in infrastructure, particularly building information modelling (BIM), saying that it will deliver better, more certain results.

Including innovative offsite manufacturing techniques in the Construction Sector Deal is also vital he said, as it can improve productivity, quality and safety. It also has the potential to rebalance jobs more equitably throughout the country, improve value for money from public investment and minimise disruption to local communities during the construction process.

He cited the comparison between Tottenham Court Road and Liverpool Street Stations, both part of the Crossrail project. The former utilised traditional in-situ concrete technology whereas the latter utilised offsite manufacture and resulted in in hugely increased productivity.

He also called on government to focus on infrastructure's whole-life performance to get more out of both new and existing infrastructure through the use of smart technologies, especially sensors and data analytics.

Lord Mair hailed the potential that this technology has to revolutionise asset management, whereby sensors embedded within infrastructure are able to continuously monitor and feed back performance data leading to more rational maintenance and repair strategies.

He also welcomed the close to half a billion pounds that will support the Construction Sector Deal, part of which will support the new Centre for Digital Built Britain, based at Cambridge University.

The Centre will develop and commercialise the digital technologies behind smart systems at the heart of tomorrow's homes. This should, he said, lead to housing, schools and hospitals that are not only faster and cheaper to build but also cost less to run and are more energy-efficient.

He urged that the industrial strategy white paper does not stand still over time. He said it should catalyse continuous collaboration between all relevant government departments, industry and trade bodies. This includes working with the National Infrastructure Commission to ensure its National Infrastructure Assessment is incorporated in the future development of the White Paper, together with ICE's National Needs Assessment.

This article was originally published here by ICE on 7 Jan 2018. It was written by Simon Barney.

Retrieved from "https://www.designingbuildings.co.uk/wiki/Lords_industrial_strategy_debate"
Create an article