Housing stock (or dwelling stock) is a term used commonly to refer to the total number of dwellings (houses, bungalows, flats, maisonettes and bedsits) in an area, region or country that are valued as domestic or mixed for the purposes of rating.

Statistics on the housing stock are often closely related to housing supply. According to the UK’s Ministry of Housing, Communities and Local Government, there were 23.9 million dwellings in England on 31 March 2017. Of these, around 606,000 were vacant dwellings. Further information is available here.

Properties forming part of the housing stock can either be occupied or vacant. The total housing stock figure includes properties that may be temporarily uninhabitable but excludes caravans, domestic garages, domestic stores and car parking spaces.

Estimates of total housing stock are usually derived from census data from previous years using the address information for households together with information provided by householders in response to questions in the census. For years that fall between two censuses, the net number of dwellings created since the last census is added to the census figure to arrive at the current total.

Given the UK’s growing population, the housing stock tends to increase each year, even allowing for clearance and redevelopment. However, according to Shelter, successive UK governments have failed to build houses in adequate numbers, and so there is an ongoing housing crisis. In 2015, Lord Kerslake, the chair of the Commission on Affordable Housing in London said “our inability to build enough homes to meet the country’s needs is one of the biggest public policy failures over 50 years.” 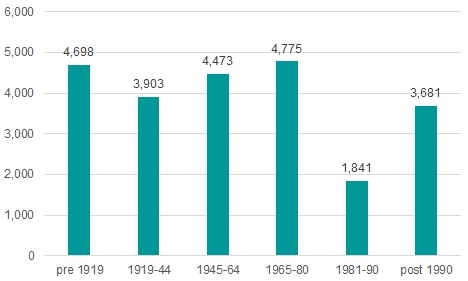 For more information see: English housing stock age and The Housing Stock of The United Kingdom.

Building stock is a term that is used to describe the total number of buildings in a country, region, municipal area or estate. It can include dwellings, offices, factories, shops, educational establishments, agricultural buildings and so on.

The Royal Academy of Engineering report 'Engineering a low carbon built environment – The discipline of building engineering physics', published in January 2010 suggested that 80% of the buildings we will be occupying in the UK in 2050 have already been built.

Retrieved from "https://www.designingbuildings.co.uk/wiki/Housing_stock_/_building_stock"
Create an article