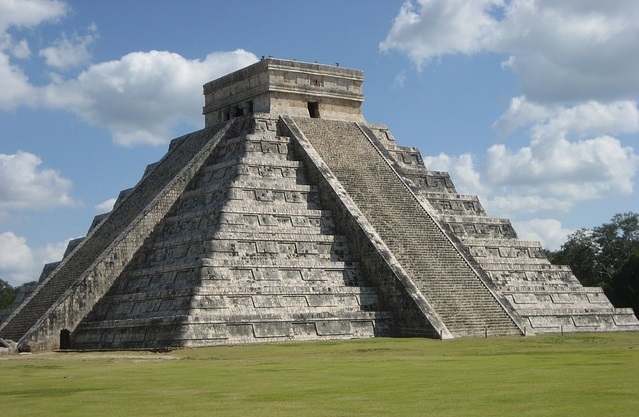 El Castillo, also known as the Temple of Kukulcan, is a Mesoamerican step-pyramid built by the Maya civilisation in around 1000 AD. The pyramid is the central structure of the Chichen Itza archaeological site in Yucatan, Mexico.

Archaeologists believe the Maya people began building ceremonial architecture around 3,000 years ago, starting with simple burial mounds, before developing the monumental step-pyramids for which they have become best known.

The pyramids consist of intricate carved stone in a stair-stepped design, topped with a flat platform upon which a smaller temple was constructed to honour a particular Maya deity. In the case of El Castillo, it served as a temple to the ‘feathered serpent’ god Kukulcan.

Upon arriving in Mesoamerica in the 15th century, the conquering Spanish adopted the structure as a strategic lookout, placing cannon on top of it and naming it El Castillo (‘the castle’). Today, El Castillo is one of the most iconic ancient structures in the world and a popular tourist attraction.

Typical of Mayan pyramids, El Castillo serves as a monumental representation of the Mayan calendar. The structure is made up of nine levels which represent the nine levels of the ‘afterlife’. Each of the four sides consists of a series of terraces which total 18 – the number of months in the Mayan year. Each side has a staircase which slants at a perfect 45-degree angle. Each staircase has 91 steps, which combined, and including the top platform, totals 365 – one for each day of the year.

Running down the sides of the northern balustrade are sculptures of plumed serpents. During the spring and autumn equinoxes, the sun hits the pyramid’s northwest corner and casts a series of triangular shadows across the balustrade. This creates the illusion of a feathered serpent crawling down the pyramid.

The temple on top of the platform features walls that continue the pyramid’s slanted angle before transitioning to vertical. Vertical stone shafts similar to those found in Hindu architecture are found above the frieze, surrounded by bas-relief carvings of animals and fruits. The apertures to the pyramid temple are divided using twin circular columns which are carved as serpents. 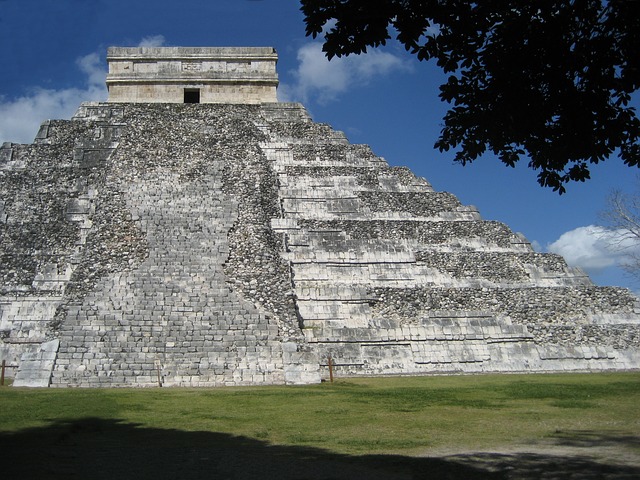 Mayans revered natural sinkholes that collected groundwater, known as cenotes. These date back to craters from the asteroid that wiped out the dinosaurs approximately 66 million years ago.

As water sources were of the highest importance for Mayan buildings, the arrangement of the Chichen Itza site begins with the cenotes. Cenotes were often used as part of spiritual ceremonies and for ritual sacrifices.

In 2015, researchers, using electrical resistivity, discovered a large cenote beneath El Castillo, measuring around 25m x 35m (82 x 114ft) and up to 20m (65ft)-deep. The water filling the cavern is believed to flow north-south, along the same circulation path of the general site.

A layer of limestone measuring 4.9m (16ft)-thick provided the foundation for the original pyramid which was built up to 1,000 years before El Castillo.

In November 2016, it was announced that experts had discovered a third structure within the pyramid, suggesting that it was built in three distinct phases.

The 10m (33ft)-tall pyramid was found within two other structures that comprise the full pyramid. Experts used a non-invasive technique that involved lighting the inside of the pyramid to see the interior without causing damage.

The middle structure was discovered in the 1930s and is estimated to date back to the years 800-1000, while the largest one is believed to have been finished between 1050-1300.

Researchers have suggested the newly-discovered smallest pyramid was constructed between the years 550-800, and have compared it to a 'Russian nesting doll'. They believe that Mayan pyramids were built within each other for a number of reasons, including deterioration of the structure and the arrival of new leadership.

If you disagree with what is said above, please free to edit with corrected information along with a reference, rather than just disagreeing. Thanks