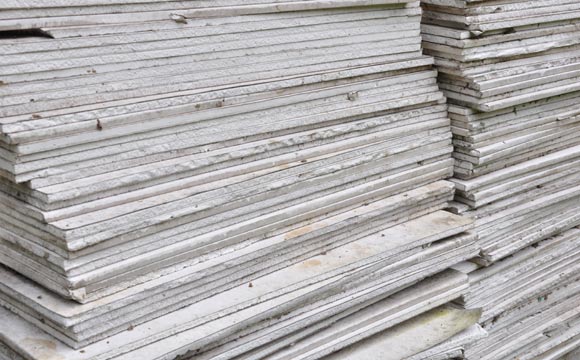 Drywall, also known as dry lining and plasterboard, is a material typically used for constructing walls and ceilings, as an alternative to plaster. It is made primarily from gypsum, which is a mined mineral.

Drywall can be preferable to plaster which has a long drying time, and walls and ceilings that may take weeks to plaster can be completed in days using drywall. It also has good fire-resistant characteristics, is easy to install, is durable and is relatively easy to maintain.

Drywall was invented by the US Gypsum Company in 1916 and first marketed as small fireproof tiles. Prior to this, interiors had relied on lath and plaster techniques which were time-consuming and labour-intensive. After several years, it began to be manufactured in the form of a single layer of gypsum compressed between two sheets of heavy paper. During the post-WW2 construction boom, drywall became the most common wall-covering material.

Mined gypsum is mixed with several additives, such as starch, paper pulp, and an emulsifier that acts as a thickening agent. It is blended with water to create a thick paste which is spread onto Manila paper in thick layers. Another sheet of Manila paper is placed on top before being oven-heated to dry the material out. It is then cut into sheets.

The most common edge treatments that are available are; tapered edge, plain edge and bevelled on all sides.

A number of specialised forms of drywall can be manufactured, such as:

The first step in the installation of drywall is to cut the sheets to the lengths required. This should be done on a dry and level surface using a drywall saw. A keyhole saw and/or circle cutter can be used to cut the necessary holes for electrical outlets, light switches, and so on.

Drywall panels are then fastened directly to wall studs or to furring strips that are applied over masonry surfaces. Panels are fixed to metal studs vertically, but best fixed to timber studs horizontally since timber is more likely to warp over time, and horizontally hanging (along with a drywall adhesive) helps minimise deflection. Fixing techniques include wallboard nails or plasterboard screws. Typically, screws are placed about every 10 cm.

The finishing process involves concealing the joints between panels using wallboard joint tape and a joint compound spread along each seam using a finishing knife. Once the compound has set and dried, it should be lightly sanded using sandpaper until no tape is visible on the surface and it is smooth and flush with the rest of the wall.

Drywall ceiling installation requires thinner sheets than walls, as they are not as heavy which makes them easier to install. When installing, the walls should be built first to give extra support for the ceiling.

To repair damage, joint compound is used to fill small holes that are then sanded smooth and flush. Larger holes may require filling with a piece of cut drywall and joint compound.

Retrieved from "https://www.designingbuildings.co.uk/wiki/Drywall_construction"
Create an article