A conservatory is a structure typically attached to a building such as a house consisting of low level brick walls with framed glazing above. In the UK, a space is considered to be a conservatory if it has glazing for at least 50% of its side wall area and at least 75% of its roof.

Traditionally, European cities built conservatories in the 19th century for horticultural purposes and for entertaining, although as far back as the 16th century wealthy landowners had built similar structures to cultivate citrus fruits. With the onset of the Second World War, there was a halt in the construction of conservatories in Britain, and they were only revived again in the 1970s. Today, conservatories are a popular way of maximizing the size of existing properties as the cost of moving to a new property has increased. 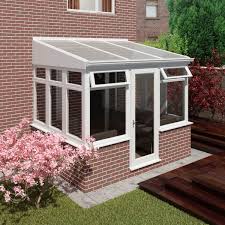 This type of conservatory gets its name from the fact that it appears to lean against the house. Lean-to conservatories are typically a simple rectangular or square shape with a gently sloping roof that is generally lower than other conservatory types. They can be particularly suitable for houses with limited garden space and bungalows.

It is usual for a lean-to to have dwarf walls, typically around 60 cm high, with glazing on all three sides as well as a glazed roof. A more affordable alternative is to use raised uPVC panels at the foot of the conservatory and polycarbonate for the roof. This is the most straight-forward and cheapest option for a conservatory. 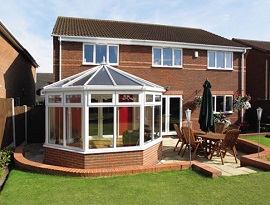 This is a period-design conservatory that is characterised by its rounded bay front and apex roof with a ridge along the top. The bay front can have a number of different facets – 3, 5 or 7 – depending upon preference. It is common for a Victorian conservatory to consist of a dwarf wall upon which the frames for the glazing sit. However, it is possible for floor-to-ceiling glazing to be used instead.

This is generally a more expensive option due to its slightly larger footprint as a result of the faceted front. 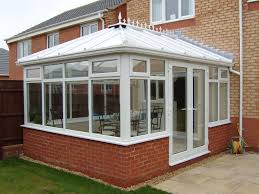 This is similar to a Victorian style but instead of the faceted front, it has a square, or rectangular shape and a pitched roof. The roof can take one of two common forms, either a gable end design where the end wall is flat, or a double-hipped design in which each side is a sloping roof including the end that slopes into the house.

A P-shaped conservatory is so called because one end is smaller than the other, with the larger end given a rounded effect with facets. This can often combine features of both Victorian and Edwardian designs, with the main advantage being that it offers more space which can, if required, be separated for different uses.

Generally, a conservatory is considered a permitted development which means that planning permission may not be needed. However, there are several conditions and limits:

While building regulations generally tend to apply for house extensions, and any new structural opening between the existing house and the conservatory, the conservatory itself is often deemed to be exempt. This is provided that they are:

Generally, conservatories should not be placed where ladder access to windows intended for escape or rescue may be obstructed.

Conservatories can be poor at retaining heat. This can be mitigated by the use of energy-rated glazing and an external (insulated) door to separate the conservatory from the rest of the house.

Where it is intended to integrate the space into the rest of the building it may be necessary for it to be better insulated, with less glazing.

'...a building attached to a dwelling with a door and any other building elements dividing it thermally from that dwelling and having translucent glazing (including frames) forming not less than either: