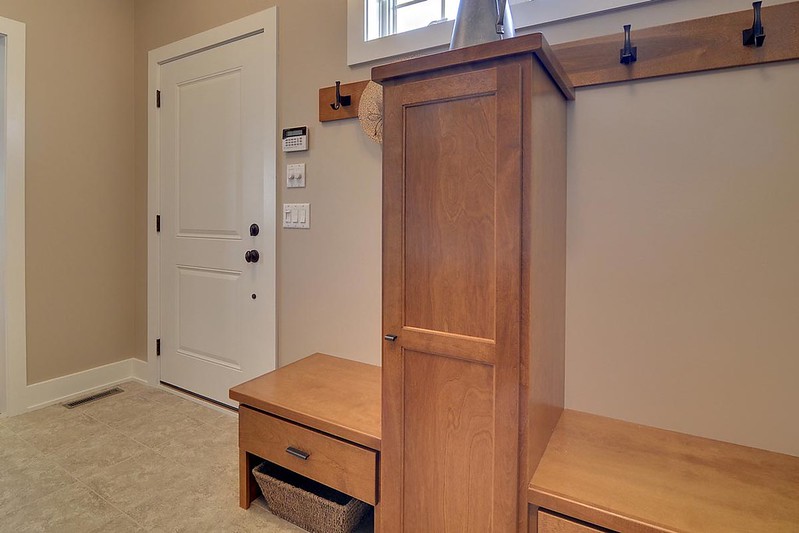 A mud room (or mudroom) is typically a secondary entrance to a suburban American home. It is most commonly used as a transitional space between indoor and outdoor environments and is not meant to serve as the primary entrance to the residence.

It is called a mud room because it is intended to be used for times when entry into the home could cause a mess. These vestibules are meant to give people somewhere to remove and store muddy footwear, wet clothing or other items that are used outdoors. They are also practical places to clean pets when they come inside.

Originally, the mud room was just an informally designated area of a home. It came into acceptance as a dedicated space in the 1980s, when it became a more standard part of suburban homes.

Mud rooms are sometimes referred to as utility rooms in the US, particularly when they are used to house washing machines, driers, water heaters or other equipment for the maintenance of the home. They can sometimes increase the value of a home if they provide a significant amount of additional storage space and are well designed.

Some mud rooms are located in the basement, although most are usually placed off the kitchen or attached garage and can be accessed easily. They are usually situated at the back or side of the house.

In the UK, mud rooms (or boot rooms) are becoming more popular and may be set up, for example, inside a conservatory.

Mud rooms can include:

Retrieved from "https://www.designingbuildings.co.uk/wiki/Mud_room"
Create an article