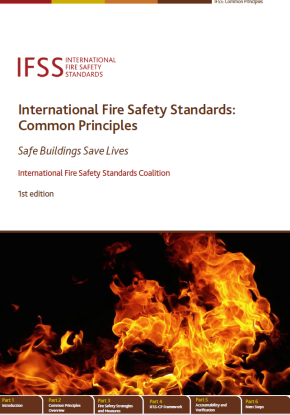 A global coalition of over 80 fire safety leadership organisations, including CIAT, has launched a new internationally consistent approach to the safety and management of buildings with the aim of saving more lives by reducing risk and preventing devastating fires. The introduction of the International Fire Safety Standard - Common Principles (IFSS-CP) follows extensive work to bring public confidence around the regulation and control of fire safety measures. It will be published as a UNECE standard.

Professor Sam Allwinkle PPBIAT MCIAT, said: "I am pleased to report that following the establishment of the International Fire Safety Standards (IFSS) Coalition there has been significant progress with the development of international fire safety standards and the development of common principles that can be used globally irrespective of location and legal jurisdiction.

"Furthermore, it is excellent news from UN, Geneva that The International Fire Safety Standards: Common Principles: 'Safe Buildings Save Lives' document was approved by the UN council and unanimously endorsed as a global standard on 13 November 2020. As a UNECE Standard, representatives of national and local governments and stakeholders are invited to apply the common principles to promote the safety of buildings."

Following the Grenfell Tower fire, there have been numerous initiatives and workshops. The IFSS is a large group of regulators, institutions and bodies from across the world coming together to bring about universal and consistent fire safety for our shared built environment globally.

Gary Strong, Chair of the IFSS Coalition, said: "Our coalition has worked hard to produce this globally applicable way to bring consistency in fire safety to buildings new and old, and to reduce the risk to lives.

"This new standard is unprecedented, being the first agreement on fire safety principles on this international scale, with its development supported by the United Nations in line with its own sustainable development goals. It is the outcome of two years of work and worldwide expertise on fire safety from over 80 coalition organisations and will bring reassurance that the construction and management of buildings upholds appropriate fire safety standards."

The standard delivers a clear performance-based framework and common principles that apply to all stages of a building's life cycle (from design, construction, in use, to change and eventual demolition). It is highly performance-based and is not intended to replace the prescriptive standards related to fire and life safety that are already adopted and successfully implemented in countries throughout the world.

Read more about the five principles in this article by Judy Zakreski for the International Code Council's Building Safety Journal.

This article was originally published on the CIAT website under the headline, 'New world-wide fire safety standard launched'. It was published on 19 November 2020.

Retrieved from "https://www.designingbuildings.co.uk/wiki/Common_principles_of_International_Fire_Safety_Standard_introduced"
Create an article