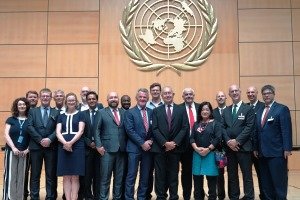 The International Fire Safety Standards (IFSS) Coalition was launched in July 2018 at the UN. It is intended to set minimum levels of fire safety and professionalism and to bring greater consistency around the world.

The coalition is formed by a group of construction and real estate professional and not-for-profit organisations and was established in response to the Grenfell Tower fire in June 2017. The fire safety standards and principles established by the coalition will be agreed at a global level and implemented locally, incorporated by professional institutions into their own standards and guidance, and supported or adopted by national governments.

The overarching purpose is to avoid the uncertainty and confusion that has been created by contrasting standards around the world relating to construction methods, products and building operations.

Members so far include organisations such as; the World Bank, CIAT, Local Authority Building Control (LABC), RICS, CIOB, Council on Tall Buildings and Urban Habitat (CTBUH), and so on. Each organisation signed a declaration of support and commitment to implement IFSS and promote it amongst their members and clients.

Retrieved from "https://www.designingbuildings.co.uk/wiki/International_Fire_Safety_Standards_Coalition_(IFSS)"
Create an article