Blockchain in the built environment

Blockchain was originally conceived when computer science was combined with cryptography [the use of codes to keep information private]. The result is an iterative digital code which ensures that information is reliably and efficiently locked down in an incredibly secure manner.

Put simply, a blockchain is a secure, digital tool for keeping track of transactions. The technology gained popularity within the financial sector following the cryptocurrency revolution of December 2017.

Blockchain is one example of a distributed ledger technology (DLT), where a record of digital transactions is shared among multiple parties on a network rather than being stored in one central location. The information is distributed to all nodes on the network simultaneously and securely due to the cryptographic nature of the source code.

The implementation of blockchain and other DLTs to digital transactions has already been shown to reduce the frictional transaction cost between parties. Blockchain solutions are already used as an enabler of trust between mutually exclusive parties allowing financial or otherwise critical transactions to occur without the need for any third-party verification. Essentially, the technology can be used to remove the administrational aspects of payments and contracts. 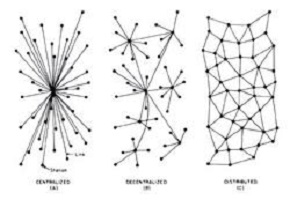 Blockchain technology has gained huge popularity among tech giants and within the financial sector following the cryptocurrency ‘revolution’ of December 2017. During this time, the price of all cryptocurrencies rose dramatically and the technology was thrust into the focus of the mainstream media. A recent report claims that 70% of central banks in the UK are putting money into the research of digital currencies.

It is clear that the development of this new digital tool is having an effect on the way digital transactions are recorded and processed in certain sectors of the business world. The question that this article hopes to address is how the power of the distributed ledger could be harnessed in the world of the built environment.

[edit] Microgrids and smart electricity – the internet of energy

Currently, some of the most prominent research is focused on how DLT can be used to track transactions in an electrical microgrid. A microgrid is a localised, physical network of electricity distribution between both electricity consumers and producers. If one resident on a microgrid has a surplus of electricity, generated by solar panels on a warm sunny day for instance, that resident can then sell the surplus energy through the microgrid. Smart metering is used to track the number of electricity units produced and used by each network user and DLT is used to track the transactions between network users. The solution is simple yet effective and trials are already successfully underway in both London and the US.

The potential of transactions across a localised microgrid and across a larger network of microgrids is huge. Taken to its natural conclusion, it will be possible to buy renewable electricity collected on the other side of the world – in the Australian outback or the Sahara – at a very cheap, almost negligible cost. This idea of worldwide, freely-accessible energy accessed through smart devices is becoming known as the Internet of Energy.

[edit] The language of smart – the internet of things

A loose definition of the Internet of Things (IoT) could be groups of smart devices that are able to interact with one another. In the future, the language that these devices use to talk to one another is likely to be based on DLT. A DLT called IOTA has been conceived and developed to enable feeless micro-transactions between machines with no human interaction. The IOTA platform, as well as many other DLTs, can automatically execute a small programme or application following a transaction of data. These programmes, built on top of a simple digital transaction, are known as ‘smart contracts’.

Imagine a building management system (BMS) that uses a DLT such as IOTA, whereby all enabled devices within the building can communicate with one another autonomously. The information contained within this network will be highly sensitive and therefore valuable – it can reveal a great deal about the condition of the building. However, in this scenario the real power of the DLT is the executable nature of the smart contract, whereby the BMS could order in, and pay for, replacement parts without the need for human intervention.

The implications of this machine-to-machine interaction are widespread and quite dramatic. The job of a maintenance engineer is likely to face important changes as items and assets become almost self-diagnosing when faced with issues and problems.

Many aspects of the built environment involve direct interaction with a supply chain. In most cases a supply chain is the backbone of any service and a smooth transition between transactions is incredibly important to an efficient process. With the growing popularity of concepts such as the circular economy where value is given to information about the source and previous life of a material, an accurate and secure digital ledger that can track this data would be an invaluable tool to provide greater transparency and allow users to review the entire distribution process.

The technology is already being used, in conjunction with wireless scanning technologies such as QR codes or RFID chips, to track foodstuffs from their origin to a supermarket shelf. The French supermarket giant Carrefour tracks free-range chickens, raised without antibiotic treatment, from the northern region of France to its supermarket shelves. It uses a radio frequency identification (RFID) tag that contains data about the chicken’s date of birth, packing date and more. The technology assures consumers that the foodstuff is ethically sourced, sustainable and fairly treated for the duration of its life – a major advantage in today’s world of conservation and compassion.

Applying this technology to the built environment will allow companies to ensure the carbon footprint of future buildings and will feed into concepts such as ‘buildings as materials stores (BAMS) and the circular economy as a whole.

This article was written by BSRIA specialist Joe Mazzon. It was published on the BSRIA website and can be accessed here.

Retrieved from "https://www.designingbuildings.co.uk/wiki/Blockchain_in_the_built_environment"
Create an article