In November 2017, CIAT took part in a Trade Mission to Santiago, organised by the British Embassy in Chile and the British Chamber of Commerce, working with the UK government’s Department for International Trade and CORFO, (a Chilean government body which promotes economic growth in the country). Organisations comprising the delegation included CIAT, BRE, RIBA, the UK BIM Task Group and the UK BIM Alliance. 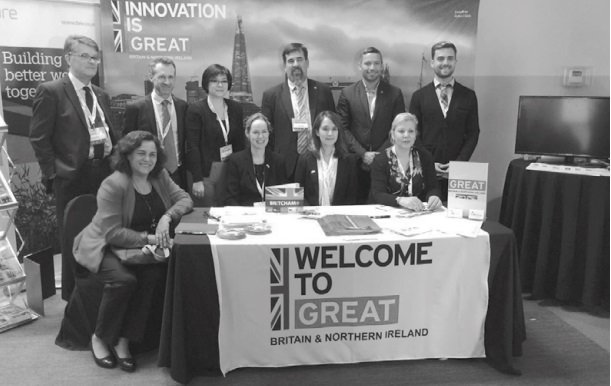 Chile is one of Latin America’s most developed economies and it continues to see steady growth. To advance the country’s economic development and prosperity, the Chilean government has earmarked US$28 billion for large-scale investment in new infrastructure projects by 2021, including the development of new ports, airports, roads, highways and public buildings.

The Chilean government is seeking to work with the UK’s leading construction and infrastructure organisations, to utilise their expertise and deliver its plans for Chile’s development. It wants to learn how to apply BIM UK protocols to its projects, improving productivity, delivering value and encouraging ingenuity in design, materials, build systems and products, and there is a need for formal recognition of professionals working in these areas.

The delegation learned about the opportunities open to them and met important and influential figures, such as representatives from relevant government ministries, main construction and architectural organisations (regulatory and professional bodies), Schools of Architectural Technology/Architecture, and commercial organisations taking part in the third BIM Latin America (LATAM) congress, part of which the trade mission delegates attended.

The BIM LATAM congress aims to analyse the scope, challenges and experiences in relation to BIM, both in Chile and globally, and includes speakers and delegates from industry, academia and technology. The Chilean government has been hugely proactive already:

The construction sector in Chile is worth 7.4% of GDP and employs around 8% of the population (approx. 800,000 people), and Chile is classed as joint best developed Latin American country by the Economist Intelligence Unit.

Only 28% of architects in Chile are regular users of BIM and 55% of engineers do not use it at all. Client demand is growing but the lack of local ability and the limited use of standards is restricting the benefits of BIM. In fact, the major factors against the implementation of BIM include the lack of qualified professionals and the high costs of software.

The introduction of BIM to Chile aims to open the market to international and local design, engineering and construction bodies, both in the commercial sector and in the third sector, particularly in regard to qualifying professionals and implementing standards. There is an opportunity for the UK to demonstrate its BIM-led design and consultancy expertise through Chile’s adoption of UK BIM protocols, and for the Institute to showcase its membership standards and competences; BIM being especially pertinent to CIAT’s members.

The delegation met with:

The Trade Mission offered an opportunity for CIAT to penetrate this open and receptive market, promoting the discipline, the Institute and its membership to government bodies, universities and major commercial organisations in Chile.

The International Department is in discussions with these Chilean organisations, as well as the other UK-based organisations which made up the Trade Mission, in order to work together to establish a long-term strategy to create and maintain strong links between the UK and Chile.

This article was originally published by AT Journal issue 125. It was written by Tara Page, International Director.

Retrieved from "https://www.designingbuildings.co.uk/wiki/BIM_Trade_Mission_2017"
Create an article