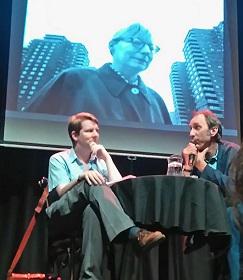 The event, at east London's Hoxton Hall, brought together in conversation two of the built environment's most forthright commentators - the Booker Prize-shortlisted novelist Will Self and the critic/author Owen Hatherley.

Self began by quoting the jazz writer Nat Hentoff - "symbolism and reality are often infused" - and reflected on how he had been thinking about this a lot in light of the Grenfell Tower fire. According to Self, London's architecture is at a "critical point", referring to architecture as "a different kind of art, necessarily social - we can think in terms of there being moral and immoral buildings".

He poured characteristic scorn on the 'pseudo-modernist' (to use Hatherley's neologism) architecture of the neoliberal period, with cheap and ugly cladding, 'barcode' facades and parametricism. The clusters of new tall buildings containing luxury apartments, far from adopting the principle of 'form follows function', were more like 'form follows future productivity' - "which is why they all look so flimsy, they are almost transparent".

"Perhaps Grenfell", Self said, "marks the end of space and place being so commodified that they depart from the very notion of being the built environment at all."

On the subject of Jane Jacobs, Self said she was someone "preoccupied with the city as a unified phenomenon; a sense that we in Britain lack. We have a weary reverence for London, but we admire its innate anarchism, the failure of planners to impose their singular vision on it."

Jacobs' most famous theories - the 'sidewalk ballet', 'eyes on the street', 'guardians and thinkers never meeting' - might now seem hoary, nonetheless said Self, "I can't think of any other urbanist thinker who comes so readily to mind when thinking about the phenomenology of the built environment." 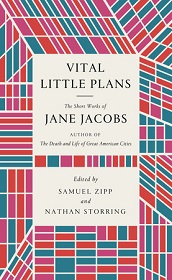 Owen Hatherley - who Designing Buildings Wiki interviewed in 2016 - began by saying we should err away from the tendency to treat Jacobs' work uncritically, and bring it down from its pedestal. With reference to the event's location, he pointed out that Hoxton Lane and Hoxton Street do something that Jacobs says is impossible - a housing project and organic city side-by-side with "awful hipster cafes selling expensive juice", shopping arcade, etc.

Hatherley went on to say that Jacobs' 1961 masterpiece 'The Death and Life of Great American Cities' was indeed an attack on the conventions of built environment and city planning; "It's a composite of Le Corbusier's Cite Radieuse, Ebenezer Howard's garden cities and verdant new towns as 'overspill' from the metropolis, the City Beautiful movement".

He characterised her transformation "from cranky freelancer to urban warrior" as the result of encountering the slum more and more as a reality rather than an abstract concept.

Self took Hatherley to task for trying to peg Jacobs as a Blairite figure, but Hatherley argued, "she was an advocate for neoliberal ideas like privatisation - the idea that the city was made up of guardians and traders who should never meet."

"But", he said, "her critique of Robert Moses and how his meat-axe sought to destroy everything that was good about New York was absolutely correct."

Ever the polemicist, Self countered by saying that "to be fair to Moses, he did at least try and build some new social housing in New York!"

In response to an audience question about the legacy and future of high-rise towers post-Grenfell, Hatherley was unequivocal:

Those seeking an introduction to Jacobs' theories and ideas, amassed during a career spanning over six decades and including forays into various other fields of interest, would do well to have a look through 'Vital Little Plans'. As well as her most famous 1958 essay 'Downtown is for People', it contains several other lesser-known pieces, all of which draw a fascinating picture of one of the built environment's most influential and inspired thinkers.

'Vital Little Plans: The Short Works of Jane Jacobs' is published by Short Books Ltd. You can purchase a copy here.

I don't believe Hatherley can have read Jacobs' book "The life and death of American Cities". Jacobs was extremely critical of Ebenezer Howard and the garden city idea as well as of Le Corbusier's vision. Her premise was much more based on observation of human behaviour and concerned with the building of local communities with diversity of shops, restaurants, convenience stores, creches, local community amenities all within easy walking distance of residential clusters. Howard and Corb envisioned something requiring urban sprawl or were in thrall to the motor car - walking, local encounters, meeting points were hardly their reference points. Jacobs is hugely relevant now in promoting local diversity and community integration. Professional planners and developers seem to forget these basics time and again unless they are truly concerned with place making as opposed to "quick buck" making.