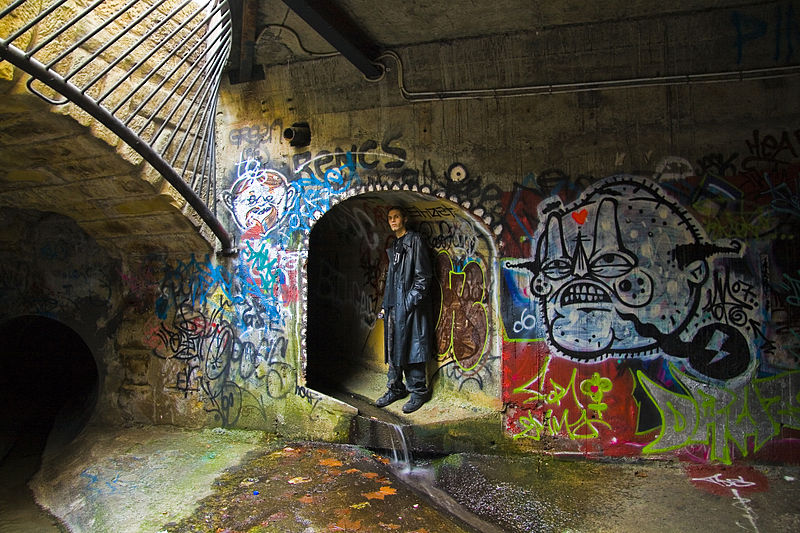 Some urban explorers undertake these activities for the purpose of photographing and documenting their actions. These explorers generally treat the sites with respect. Others do it to apply graffiti (particularly in difficult to reach locations) or undertake other forms of vandalism or theft (particularly on derelict sites). It is also believed that some individuals simply seek the adrenaline rush associated with the thrill of being put in physical danger or the risk of being in a legally dubious situation.

[edit] Infiltration: structures in use

One form of UE involves partially completed construction projects or building renovation sites (particularly those that are actively under construction or even partially in use). This is generally referred to as infiltration. One of the goals of infiltration is to explore a restricted area.

Common sites for UE infiltration include mechanical rooms, elevator rooms, abandoned floors and other normally unseen parts of working buildings. Roof infiltration is sometimes referred to as rooftopping or skywalking and can include cranes, antennas, smokestacks and so on.

The term roof-and-tunnel hacking is a specific type of UE referring to rooftops or transit tunnels. Draining is UE associated with storm drains or sewers.

When associated with derelict structures – often condemned or otherwise deemed unsafe – UE may be referred to as urban spelunking, urban rock climbing (or buildering), urban caving or mousing. The general term for this type of UE is abandonment.

UE is generally considered to be a form of trespass. Being caught may result in significant penalties including fines and/or imprisonment.

It can also be extremely dangerous, resulting in injuries from contact with toxic substances or broken glass. In some cases, it has the potential to cause death from electrocution, suffocation (as a result of entrapment) or falls from height.

Keeping UE trespassers off of a property may require legal action, as was the case in 2014 when Canary Wharf Investments (CWI) sought to remove several urban explorers who had been repeatedly trespassing on buildings and cranes to take photographs of their adventures.

In the article, ‘Urban exploration: a trend that’s going through the roof’, Olivia Vice of the Real Estate Blog reported, “CWI made an application for an injunction against them and ‘Persons Unknown’ to prevent future trespass and to require them to deliver up their media materials. There was significant evidence to show that, without the injunction, the defendants would continue to trespass. The High Court was ultimately satisfied that the injunction was suitable and that its terms were correctly formulated to be proportionate and only capture those engaging in the undesirable conduct.”

Unwanted visits can not only endanger the trespassers, but may jeopardise the safety of those who are meant to be on the property. These activities may also compromise productivity on the site if it causes damage to equipment or equipment is stolen.

Preventive measures may include the installation of physical barriers and deterrents such as gates, hoarding, CCTV and even anti-climbing measures on equipment and scaffold. Site guards and regular site inspections are additional safety measures.

In some instances, it may also be the legal responsibility of owners to prevent unauthorised intrusions.

In January 2020, DB Cargo (UK) Ltd was fined after being convicted of an offence under the Health and Safety at Work Act. In the 2017 incident, two boys were electrocuted after climbing through a hole in the company’s fence which was situated next to playing fields. “Two of the three boys climbed on top of a train, and while standing on the roof, one suffered a devastating electric shock from the 25,000 V overhead power lines. He sustained 40% burns and life changing injuries. The second child sustained burns to his hand and a broken arm.”

The Health and Safety at Work etc Act 1974 requires that employers take reasonable steps to ensure the health and safety of persons other than their employees, which implies a duty to ensure people are safe from activities on construction sites. In addition, the Construction (Design and Management) Regulations (the CDM Regulations) require the prevention of access to construction sites by unauthorised persons, and that ‘… where necessary in the interests of health and safety, a construction site must, so far as is reasonably practicable, and in accordance with the level of risk posed, comply with either or both of the following; have its perimeter identified by suitable signs and be arranged so that its extent is readily identifiable; or be fenced off.'

In some instances, it may be feasible to seek permission for UE. While this may remove the thrill associated with a forbidden adventure, it may deliver photographic opportunities in hidden areas - but in a safe and informed manner.

For abandoned sites with historic value, approved UE should be undertaken in a manner that protects and respects the physical properties of the site.

Retrieved from "https://www.designingbuildings.co.uk/wiki/Urban_exploration_UE"
Create an article