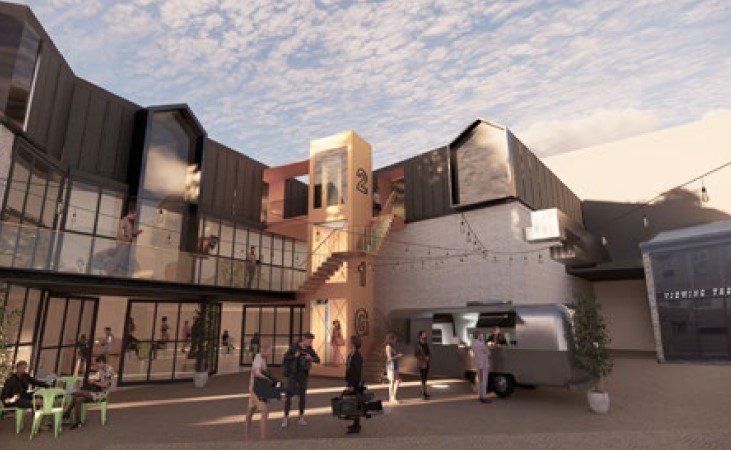 The year 2021 has seen extensive restoration and refigurement of the historic two-acre site of Twickenham Studios, one of London’s oldest surviving film studios. The refurbishment and development of the existing onsite buildings was combined with newly designed and built areas to cater for much needed additional space.

Constructed in 1913 on the site of a former ice rink, Twickenham Studios was purpose built to be the largest film studio in the UK. Surviving bomb damage during two world wars, the studios have played host to countless cinematic classics including ‘The Italian Job’ (1969), three of the Beatles’ films as well as more recent productions.

Like a stage set itself, the design concept was inspired by the process of design and construction within the film industry. Mindful of Twickenham Studios’ vital history, Hollaway Studio, alongside The Creative District Improvement Company (TCDICo.), which has drawn up the scheme, emphasised respecting and restoring the existing building fabric while weaving in new state of the art facilities.

Hollaway Studio’s focus on the restoration and reconfiguration of the existing site has meant that much of it will remain as it is with visual improvements proposed through the careful enhancement of existing architectural features. This sustainable approach ensures less material and construction waste, causing minimal impact to the ongoing activities onsite.

As well as external works, internal spaces will be refurbished to modern day high spec standards. With sustainability imperative to the site, a number of approaches have been taken including green and blue roofs across all new additions to the site, not only increasing biodiversity but also contributing to effective drainage.

Architectural and decorative features of the historic original elevation along St. Margaret’s Road have been examined and manipulated to create a playful and expressive façade. In order to achieve this detailed effect, moulded panels filled with pigmented concrete have been proposed; the pigmentation allows for the new concrete façade to marry into the neighbouring existing Victorian ones, and the detailed casting system permits the construction of complex and detailed shapes and patterns.

This is produced digitally and fabricated with computer numerical control (CNC)-milled panels which are used to cast the concrete either in-situ or prefabricated off-site. These considered results pay homage to the stage set, providing the public a window into the site and the processes beyond, and allowing people to appreciate the remarkable part that Twickenham Studios has played in the British film industry.

Studio 1, while remaining much the same, will have new PV solar panels incorporated into its refurbishment that will feed into the sustainable energy use of the site. The proposed signage to introduce Stage 1 will reflect the historic signage that once inhabited the façade along St Margaret’s Road. Users will then be transported through the sets of the ongoing productions and then further past the studios and into a new boutique cinema which will showcase the works produced in house.

The art department and refurbished post-production facilities will inhabit existing buildings extending into a lightweight roof extension at the rear of the two-acre site. These extensions have been designed so that they can be pre-fabricated and moved onto the site with minimal interruption to the ongoing productions. This approach also means that materials and components will be maximised with minimal waste. These new proposals will look out onto the newly created external landscaped courtyard space that will be host to an airstream café and outdoor seating.

This article originally appeared in the Architectural Technology Journal (at) issue 138 published by CIAT in summer 2021. It was written by Hollaway Studio.

Retrieved from "https://www.designingbuildings.co.uk/wiki/Twickenham_Studio_-_London%27s_world-renowned_film_studio_transformed"
Create an article