The Courtyard retirement community in Cornwall 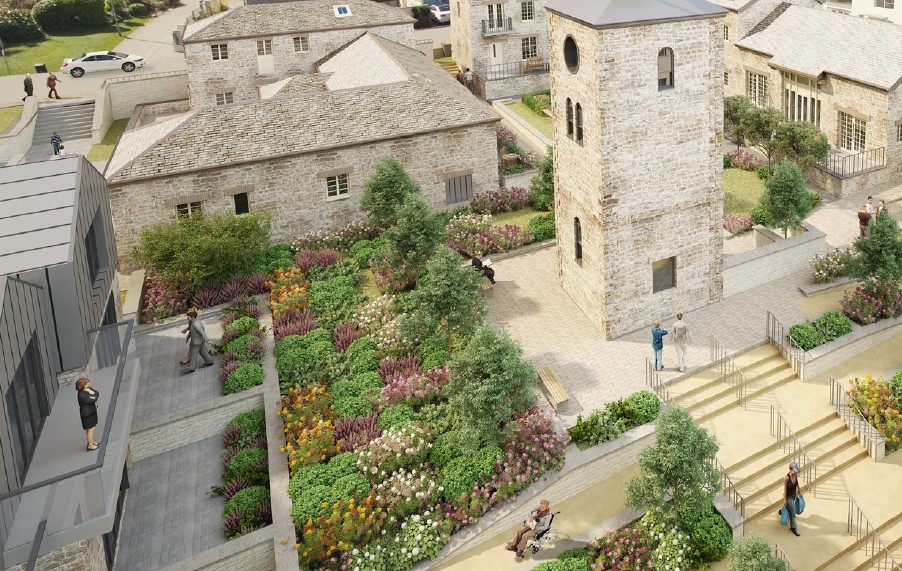 When Stride Treglown set out to design The Courtyard, a development that hoped to offer retirement properties in Cornwall, they were met with both opportunities and challenges.

The site featured luscious greenery, was surrounded by interesting wildlife (including bats) and offered unparalleled views towards the sea, however the site was a mess. The historic buildings it was home to were dilapidated, it had become a dumping ground for building materials and it sloped down to the sea. In short, they had their work cut out for them.

The practice wanted to restore the existing structures – farm buildings and a Grade II listed clock tower – to their former glory but also offer modern units.

I spoke to Ben Honey MCIAT, a chartered architectural technologist for Stride Treglown, about striking the right balance between redevelopment and conservation. He acknowledged that it had been a challenge but believed they had gotten it right.

Local stone was used on the existing buildings, and they were brought up to the modern standards of building regulations with a dispensation for the walls on preservation grounds. Although the buildings were not listed, the practice was keen to maintain their existing character.

Ben told me that it was “very difficult to replicate buildings of that age” so it was decided they would be complemented with modern units. Concrete frames and render were used for these apartments and houses. Render has been used for hundreds of years in Cornwall and compliments the stone of the old buildings.

It was important to keep different parties satisfied as the project progressed. The building inspector needed to see that structures had been made safe, whereas the heritage officer wanted to see the existing buildings on site maintain their historical character.

Strides also had to please another key stakeholder: the local community. With the buildings in a state of disrepair and the site having become a dumping ground, residents were happy to see it being worked on. However, they also wanted to make sure the site did not become “overdeveloped”.

The practice was ultimately able to please everyone. Ben is modest and keen to highlight the work of others who were involved.

He praised Stride Treglown conservation architect Paul Channing and the landscape architects that Strides worked with. The “balancing act” involved a collaboration between professionals, and this was key to the success of the project.

The buildings on the site have given it a new lease of life, but a lot of thought was put into the natural context of the development. Trees, sunlight, shade and wildlife were all considered. Ben told me that they wanted to maintain as much biodiversity as possible and not disrupt the natural environment.

On the southern boundary, large cypress, Turkey oak and sycamore trees have been retained even though this restricts potentially stunning sea views from some of the properties. This was a trade-off that the practice was very much aware of, but it believed that it was in the interests of everyone – including future residents – to make. Outdoor space gives residents a space to “not only use but also to share together”. They also have access to a wooded area on site through path links. A bat roost has been built on the southern boundary as part of the ecological strategy.

Despite Ben’s modesty, having chartered architectural technologists involved in the project was clearly invaluable. They helped with technical design and were also involved in specifying different materials, such as breathable render. Having individuals able to help with this kind of detailing was important.

Architectural technologists were also involved with work on the outdoor spaces, providing advice on levels. This was crucial in the sloping environment. Ben and other architectural technologists ensured, for example, that ramps were coordinated with key features within the site and complied with regulations. Ben describes this as a challenge but tells me that ‘we got there in the end’ and once again recognises the work of the landscape architects.

After a COVID-19 related delay in 2020, work on the site resumed. The bold development not only offers beautiful views, but also showcases the value of professional collaboration and of course, that of chartered architectural technologists themselves.

This article originally appeared in the Architectural Technology Journal (at) issue 135 published by CIAT in fall 2020 the headline under the headline, 'The Courtyard'. It was written by James Evans, Communications & Digital Administrator.

Retrieved from "https://www.designingbuildings.co.uk/wiki/The_Courtyard_retirement_community_in_Cornwall"
Create an article