The challenging targets that have been adopted for UK-wide reductions in carbon emissions and government-sponsored reductions in life cycle costs have stimulated a wide range of innovation in construction materials and components. This is on top of design and process innovations that have made more effective use of the materials and components that are already available.

The NanoPigmy project, which has received funding from the EU Seventh Framework Programme, has researched and developed some new materials that have the potential to reduce both the environmental impact and the cost of owning and operating buildings. This has been a collaboration between eight European industrial and academic partners.

Many widely-used construction materials include pigments to provide colour. These include paints, plastic components, and cement-based products. Some of these pigments have in the past been altered to give them additional properties, for example high infra-red reflectance or anti-bacterial properties.

The NanoPigmy project has taken this further by developing multi-functional pigments with two distinct properties, apart from colour, in a single material. This approach gives the pigment, and hence the ultimate product into which it is incorporated, a broader set of applications and the opportunity to deliver a wider set of benefits.

The combinations of additional properties that NanoPigmy has targeted include the following:

These pigments have been developed under laboratory conditions, and are now being scaled-up to pilot production processes. The commercial effectiveness of these manufacturing challenges will not be known until the end of the project, but at this stage there are some promising technical results from small-scale demonstrations of the innovative pigments and the modified materials that they have been incorporated into.

The pigments have been tested on small demonstrator buildings on the outskirts of Madrid by Acciona, one of the project partners. Some of the preliminary results are reported below.

Thermal storage was tested in paint, polymer board and cement render. It is anticipated that changes in internal temperature will be related to the quantity of modified pigment in the final material and the rate at which this material is applied to the building. So, for example, it would be expected that the impact of the thermal storage render would be more significant that the thermal storage paint.

The diagram shows the comparison of temperature readings at different times of day and night inside the two demonstration buildings – one with a traditional reference render and the other with the NanoPigmy render applied to the outside. 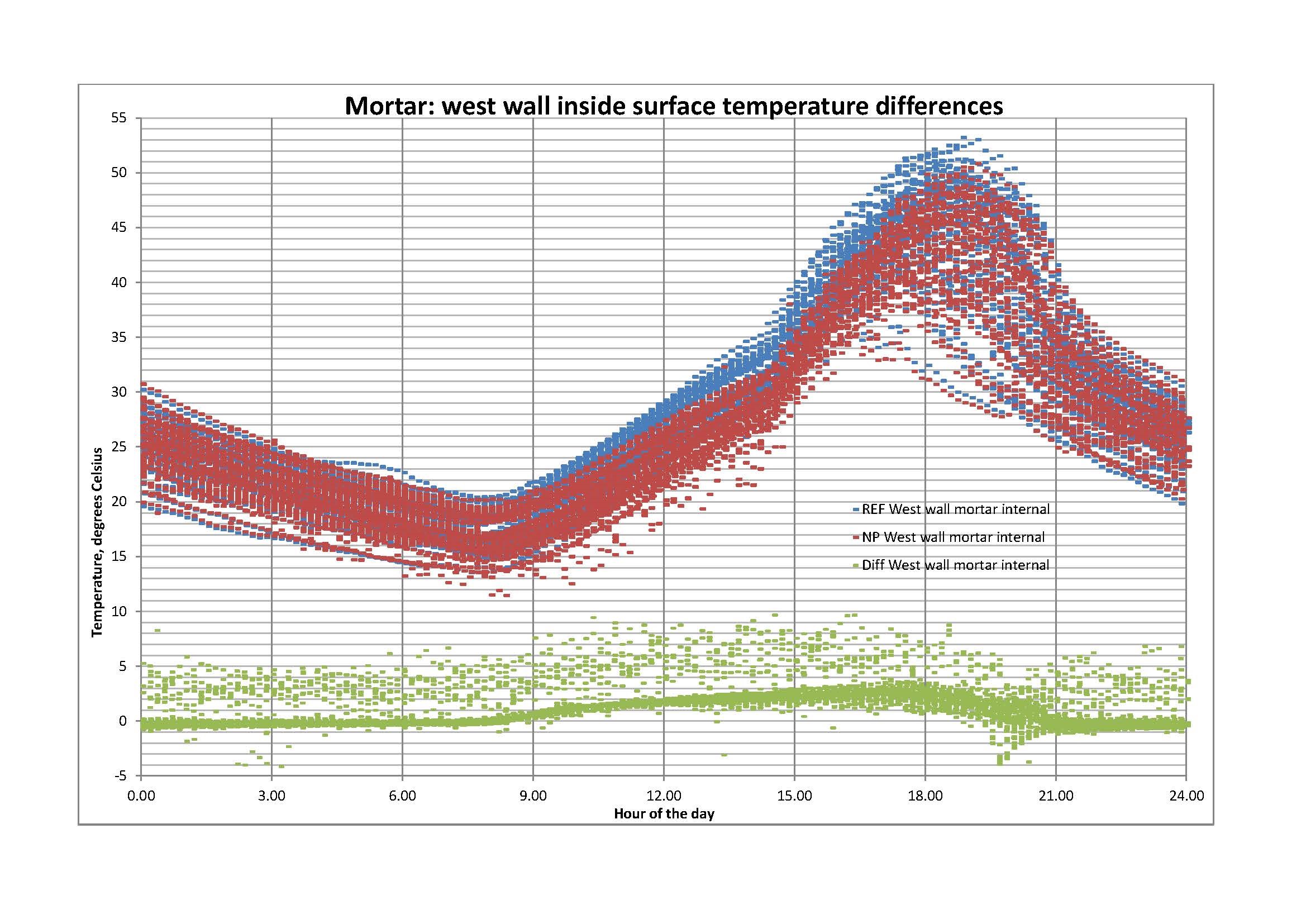 There are two effects that can be seen on this diagram.

Firstly there is a lower temperature peak from the red data points which represent the NanoPigmy render than occurs with the reference render. During office working hours, this temperature difference varies between 0 and 3 degrees Celsius. To a first approximation, it would be fair to say that the application of the modified render is reducing the internal temperature by an average of 1.5 degrees across the working day. This will reduce the absolute level of cooling that an air-conditioning system would need to provide.

Secondly, there is a time shift whereby the building with the modified render heats up more slowly during the day than the building with the reference render. On average there appears to be a 1-hour delay. This will reduce the amount of time for which the air-conditioning needs to be operating.

Both of these effects will reduce the amount of energy needed to operate the cooling system, and this will reduce both the cost and the environmental impact of operating the building when the modified render using NanoPigmy pigment is used.

Self-cleaning was tested in a cement render, applied to the outside of the demonstrator buildings. The effectiveness of the modified and reference pigments to shed dirt from their surface was measured by the speed at which a patch of red-coloured dye disappeared from the external surface of the render.

The graph below shows the degree to which the Rhodamine B dye disappeared from the reference and NanoPigmy surfaces. Because Rhodamine B is highly soluble in water, it was possible to see significant results in only a few days. 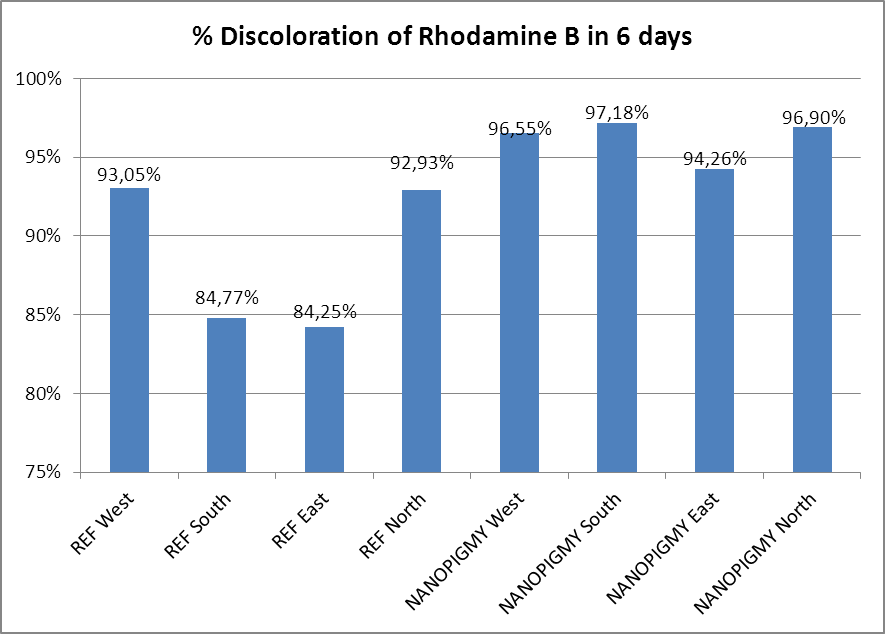 If replicated over a longer timescale, this result would mean that an external render containing the NanoPigmy self-cleaning pigment would only need to be cleaned at 1/3 the frequency of a standard render.

This reduction in cleaning means that the cost and the environmental impact of cleaning is significantly reduced by using the NanoPigmy render.

The exact quantitative savings from these demonstrations are still being calculated. They will need to be balanced against any increases in either the capital cost or the environmental impact of manufacture of the more sophisticated material using the innovative pigment. However, it is clear from these preliminary results that there could be significant benefits to building owners and operators from using these innovative materials.

This project has received funding from the European Union Seventh Framework Programme (FP7-NMP-2010-Small-5) under grant agreement no. 280393.