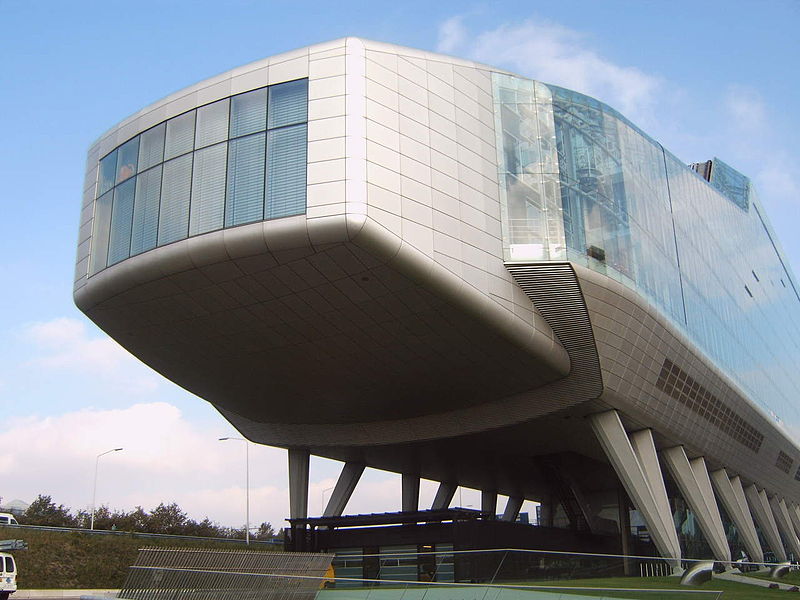 ING House was built as the Amsterdam headquarters of ING, the Dutch bank and insurance group. It is located in Amsterdam’s Southern Axis (Zuidas) financial district outside of the city centre, alongside the A10 ring road.

Known as the shoe (or the dustbuster), the well established visual landmark is popular with the local community due to its distinct shape. The building’s iconic postmodern design is the work of Meyer and Van Schooten (MVSA Architects) and was constructed by Heijmans. The project began in 1999 and was completed in 2002.

The unusual design of the building was selected for its ability to fit into the surrounding environment. Situated in a long, narrow strip of land, the structure is wedged between the existing Zuidas business district and the New Lake green zone.

In addition to satisfying the geographic criteria of the site, the building had to support ING’s ecological requirements while providing a comfortable environment. The building's intelligent glass facade and the aluminium supports create a successful framework for a design that accomplished those goals.

The shoe is supported by 16 v-shaped steel legs. Each leg is independent, yet stable, due to the pin and concrete technique of construction used (much like the technique used in bridge construction). The height of the legs varies from 9 to 12 metres.

The north elevation of the building faces the business district and the motorway. It is lifted above the embankment (by the higher legs) to minimise direct views of the traffic. Acoustic treatments are incorporated into this side of the building to dampen the noise from traffic.

Inside the building, sustainable approaches are also apparent. Openness and green spaces are incorporated throughout the communal and work areas, and on the south side (away from the motorway), emphasis is put on views across the landscape.

In 2002, the building was awarded both the National Steel Award and the European Award for Steel Structures.

Retrieved from "https://www.designingbuildings.co.uk/wiki/ING_House"
Create an article