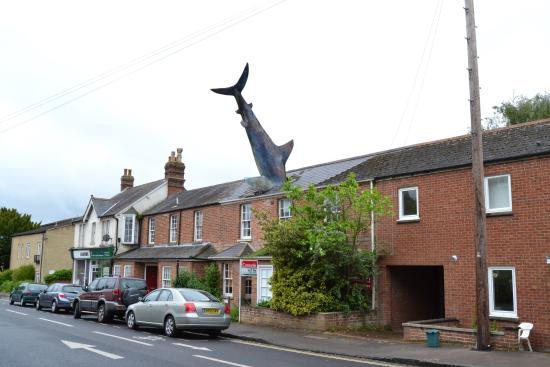 The Headington Shark is a terraced house located in Headington, Oxford, that features a sculpture of a large shark on the roof.

Officially called Untitled 1986, the shark sculpture is embedded head-first, giving the impression of having fallen out of the sky.

It was installed by crane on the roof of 2 New High Street on 9th August 1986 by Bill Heine who said that his motive was “…to express someone feeling totally impotent and ripping a hole in their roof out of a sense of impotence and anger and desperation … it is saying something about CND, nuclear power, Chernobyl and Nagasaki.”

The shark was designed by sculptor John Buckley and built by a local carpenter friend using painted fibreglass. It weighs 200 kg and measures 7.6 m (25 ft) in length. 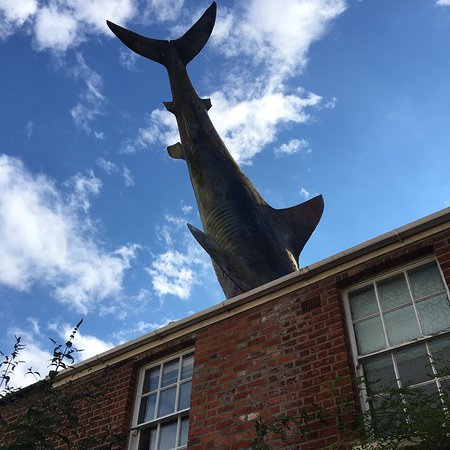 Although the police were informed that the installation was taking place, they were unable to take action as there is no criminal law preventing a homeowner installing a sculpture on their own roof. However, it was the immediate focus of controversy, with local residents complaining and Oxford City Council trying to remove it on safety grounds. When this proved unsuccessful they attempted enforecment action because of a lack of planning permission.

As time went on though, it became a minor attraction for Oxford and support from local residents’ began to grow. After six years of legal proceedings, central government became involved, with ministers in the Department of the Environment deciding in 1992 that the shark could remain as it did not cause ‘harm to the visual amenity’.

In August 2007, the shark was renovated by Buckley, and in 2016, Heine’s son bought the house to ensure its preservation.

The planning inspector's report to Michael Heseltine is worth reading for its clarity of prose and thought. Here's an extract:

Bill played for time, but in 1990 he was refused retrospective planning permission ([tel:90/00084 90/00084]/NF) by Oxford City Council. Undeterred, in 1991 he appealed to the Secretary of State for the Environment (then Michael Heseltine); and in 1992 Heseltine’s Inspector Peter Macdonald came out in favour of the applicant, and had the following to say about the shark:

"It is not in dispute that this is a large and prominent feature. That was the intention, but the intention of the appellant and the artist is not an issue as far as planning permission is concerned. The case should be decided on its planning merits, not by resorting to “utilitarianism”, in the sense of the greatest good to the greatest number. And it is necessary to consider the relationship between the shark and its setting…. In this case it is not in dispute that the shark is not in harmony with its surroundings, but then it is not intended to be in harmony with them. The basic facts are there for almost all to see. Into this archetypal urban setting crashes (almost literally) the shark. The contrast is deliberate … and, in this sense, the work is quite specific to its setting. As a “work of art” the sculpture (“Untitled 1986”) would be “read” quite differently in, say, an art gallery or on another site. An incongruous object can become accepted as a landmark after a time, becoming well known, even well loved in the process. Something of this sort seems to have happened, for many people, to the so-called “Oxford shark”. The Council is understandably concerned about precedent here. The first concern is simple: proliferation with sharks (and Heaven knows what else) crashing through roofs all over the City. This fear is exaggerated. In the five years since the shark was erected, no other examples have occurred. Only very recently has there been a proposal for twin baby sharks in the Iffley Road. But any system of control must make some small place for the dynamic, the unexpected, the downright quirky. I therefore recommend that the Headington shark be allowed to remain."