Kelpies are mythological shape-shifting spirits possessing the strength and endurance of 100 horses and inhabiting the lochs and pools of Scotland, where they usually appear as horses, but can adopt human form.

The Kelpies, are two 30 metre high stainless steel clad monuments at The Helix on the Forth and Clyde Canal. They were the vision of artist Andy Scott, and were inspired by the mythological beasts. 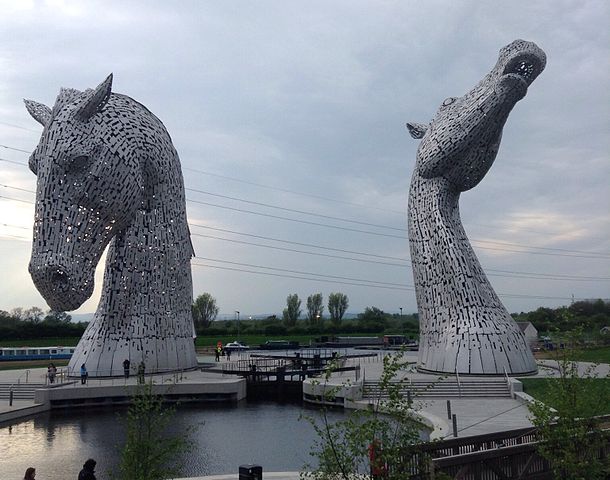 The Helix was established just outside Falkirk, between Edinburgh and Glasgow, in 2003, creating a green space to connect and engage the local communities.

The Kelpies represent the transformational and sustainable qualities of The Helix and recognise the historical reliance industry had on horses; pulling wagons, ploughs, barges and coal ships and helping transform the economy.

Scott said, "I see The Kelpies as a personification of local and national equine history, of the lost industries of Scotland. I also envisage them as a symbol of modern Scotland - proud and majestic, of the people and the land... They stand testament to the achievements of the past, a tribute to artisanship and engineering and a proud declaration of intent for the future of Scotland."

The Kelpies weigh 300 tonnes each and sit on 1,200 tonnes of steel-reinforced concrete foundations. They were built in just 90 days and were 'topped out' on 27 November 2013. They opened to the public on 21 April 2014 and were visited by nearly a million people in their first year.

A 30-minute guided walking tour takes visitors through Scott’s vision and explains the relationship of The Kelpies with history and industry. The tour culminates with access to the inside of a Kelpie to see the engineering supporting the structure.

Retrieved from "https://www.designingbuildings.co.uk/wiki/The_Kelpies"
Create an article