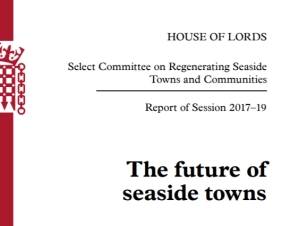 In April 2019, the Regenerating Seaside Towns Committee of the House of Lords published a report on the future of seaside towns, and noted that many coastal communities are in need of investment, particularly in housing, transport, education and infrastructure.

Many seaside towns and coastal communities are in desperate need of improvements to transport, housing and broadband. Better access to further and higher education for young people in seaside towns is needed too.

The Chairman of the Committee, Lord Bassam of Brighton, said:

"For too long, seaside towns have been neglected. They suffer from issues rooted in the decline of their core industries, most notably domestic tourism, but also in fishing, shipbuilding and port activity, and from their location at the ‘end of the line’. The potential impact of Brexit on these towns, particularly the hospitality sector, also remains an open question.

"A single solution to their economic and social challenges doesn’t exist. What is needed is a package of strategic initiatives and interventions where national and local government work together to address issues such as transport, housing, post-school education and high-speed broadband.

"Places like Brighton and Bournemouth have shown that ‘the seaside’ can successfully reinvent itself. The Committee is confident that if our recommendations are pursued seaside towns can once again become prosperous and desirable places to live in and visit."

The main findings and conclusions from the report include:

This article originally appeared on the IHBC Blog.

Retrieved from "https://www.designingbuildings.co.uk/wiki/Future_of_seaside_towns"
Create an article