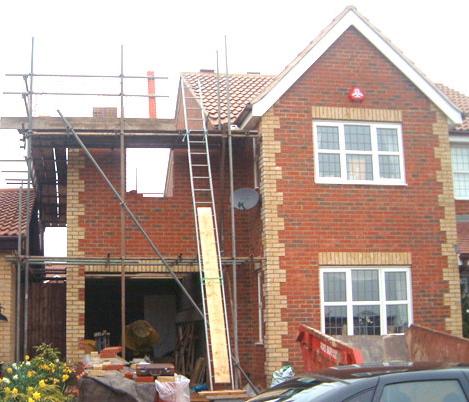 This means you must refinance and enter into a new loan that is a more conventional financing option for the completed building, such as a fixed rate 30-year mortgage.

[edit] Qualifying for a construction loan

Banks and mortgage lenders are often wary of issuing construction loans for many reasons. One major issue is that a lot of trust needs to be placed in the contractor undertaking the building work. The bank or lender is lending money for something that is to be constructed, with the assumption that it will have a certain value when it is finished.

If things go wrong – for instance, if the builder does a poor job or if property values fall – then it could turn out that the bank has made a bad investment and that the property isn’t worth as much as the loan.

To try to protect themselves from this problematic outcome, banks often impose strict qualifying requirements for a construction loan. These usually include the following provisions:

[edit] The involvement of a qualified builder

A qualified builder is a licensed general contractor with an established reputation for quality building. This means that loan applicants may find it difficult to convince an institution to finance a project if they are intending to act as their own general contractor, or are involved in an owner/builder situation.

This includes floor plans, as well as details about the materials to be used. Builders often put together a comprehensive list of all details, everything from ceiling heights to the type of home insulation to be used.

[edit] Building value must be estimated by an appraiser

Although it can seem difficult to appraise something that doesn’t exist, the lender must have an appraiser consider the building specifications, as well as the value of the land being built on. These calculations are then compared to other similar buildings with similar locations, similar features, and similar size, with an appraised value being determined from these.

[edit] A large down payment

Typically, 20% is the minimum you need to put down for a construction loan – some lenders require as much as 25% down. This ensures that that the applicant is invested in the project and won’t just walk away if things go wrong. This also protects the bank or lender in case the building doesn’t turn out to be worth as much as expected.

Providing these criteria are met and the applicant has a positive credit rating, they should be able to qualify for a construction loan. Generally, lenders also require information regarding income (to be sure mortgage payments can be afforded), as they would with any type of standard mortgage loan.

Once an applicant has qualified and been approved for a construction loan, the lender begins paying out the money they agreed to loan. Rather than provide all the money up-front, a schedule of draws is set up.

Draws are designated intervals at which the builder can receive the funds to continue with the project. There may be several draws throughout the duration of the build. For instance, the builder may get the first 10% when the loan closes, and the next 10% after the lot is cleared and the foundation is poured. The next influx of money may come after the house is framed, and then the subsequent payout after the house is under roof and sealed up.

The number of draws and the amount of each is negotiated between the builder, the buyer, and the bank. Typically, the first draw comes from the buyer’s down payment (so it is the buyer’s money most at risk). It is also common for the bank to require an inspection at each stage before releasing the money to the builder. This helps to ensure that everything is on track and that the money is being spent appropriately.

Interest is also only paid on the amount that has been paid out already. For instance, if £100,000 is being borrowed, and only the first £10,000 has been paid out, interest is paid only on the first £10,000 and not on the full £100,000. Monthly payments need to be made for this loan – just as with a conventional loan – so monthly payments should start low when only a small amount has been borrowed, and gradually increase as more of the money is paid out to the builder.

Construction loans make it possible to build when you might otherwise be unable to do so. However, some of the potential risks include:

The final payment on the construction loan may become due and a fee will have to be paid to extend that loan – at least, until the work is finished and an end loan can be refinanced.

This could be due to the poor performance of the builder or if the market fails. In this case, extra capital must be found at the time for refinancing the construction loan into an end loan.

[edit] Inability to qualify for an end loan

If the applicant’s income or credit changes significantly during the course of the project, an end loan application may be refused. Since construction loans are not intended to be permanent, this creates a problem. If the applicant is unable to refinance to pay off the balance, and the lender refuses to extend the loan, they could assume ownership of the building.

This article was published by Money Crashers. Read the original article here.