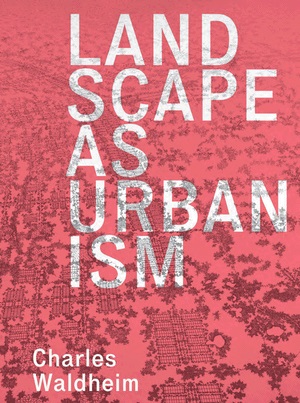 In ‘Landscape as Urbanism’, author Charles Waldheim claims to have presented the first monographic account of a subject that has grown in prominence from a position of relative academic obscurity over the last decade-or-so. Waldheim , who is Professor and Chair of Landscape Architecture at Harvard University attempts to place landscape urbanism within the context of a broader set of historical, theoretical, and cultural conditions and proposes ‘a general theory for thinking the city through the medium of landscape.’

As an approximate definition, he suggests landscape urbanism is the theory of urban planning through the medium of landscape. It promotes the general idea that cities are best planned and organised, not through building and infrastructure design, but through the design of landscape.

In ‘Landscape as Urbanism’, Waldheim seeks nothing less than to establish the landscape architect as the urbanist of the age. Indeed, he presents a case early on, that ‘...the fundamental assumption that planning is the medium through which public policy and community participation are brokered may also be open for debate.’

In so doing, Waldheim certainly makes a strong case for landscape urbanism, and, arguably, its inevitability. Perhaps such theories will become more prevalent and mainstream as people continue to densify in urban megacities over the next few decades.

The heavy text is scattered with generous illustrations that offer some interpretive clarity to what can become a vague and confusingly abstract subject. Mindful of this common criticism of the theory, with scant few real-life physical examples to draw from, the book includes works from around the world by designers such as Andrea Branzi, Frank Lloyd Wright, Michael Van Valkenburgh, and Ludwig Hilberseimer.

The thoroughness and depth of thought that Waldheim brings to this book and its ideas can feel rather like grappling with a piece of deconstructivist theory from the likes of Jacques Derrida or Jean Baudrillard. While this isn’t unnecessarily a bad thing, it can be more onerous and weighted down by academic verbiage than it needs to be, or ought to be for something purporting to be a ‘general theory’.

While those familiar with landscape urbanism will find a lot to appreciate in this intelligent and well-presented book, it may not succeed in enlightening a wider audience about this important but nuanced subject matter.

You can find out more and order the book here.