BSRIA’s BIM Network focusses on bringing particular issues around BIM to its members in an informal environment. As part of this mission, it has previously held two events specifically looking at the Innovate UK (formerly Technology Strategy Board) competition to provide the missing Level 2 BIM components – the digital plan of work (dPoW) and the classification system, all wrapped up in a user-friendly on-line tool.

The competition was won by RIBA Enterprises, with a team including NBS, BIM Academy, BDP, Laing O’Rourke, Microsoft, Mott MacDonald and Newcastle University. The period of the initial delivery phase was six months with a due date of mid-April.

This topic was first looked at in the Network in February 2014 when the competition was about to be launched, and a second event in September reported on progress and the outcome from the second stage of tendering.

The latest event, held on 21st April 2015, was timed to follow hot on the heels of the launch by RIBA Enterprises. As it turned out, a beta version was the subject of a ‘soft’ launch, made at the BIM Show Live on the 8th April, with the ‘hard’ launch now planned for some time in June. The contract calls for RIBA Enterprises to ‘maintain’ the product (known as the BIM Toolkit – but more about the title later) for five years so development is expected to continue.

Almost thirty people attended the half day event, and represented a wide cross section of the built environment industry with designers, constructors, manufacturers and utilities suppliers all taking part.

The format for the event was very simple, with the aim being to give as much time for debate as possible. Following a brief introduction from the chairman, Rob Manning from the Government’s BIS BIM Task Group gave a presentation describing the background to the UK Government’s Level 2 BIM requirement, and to the Innovate UK competition. 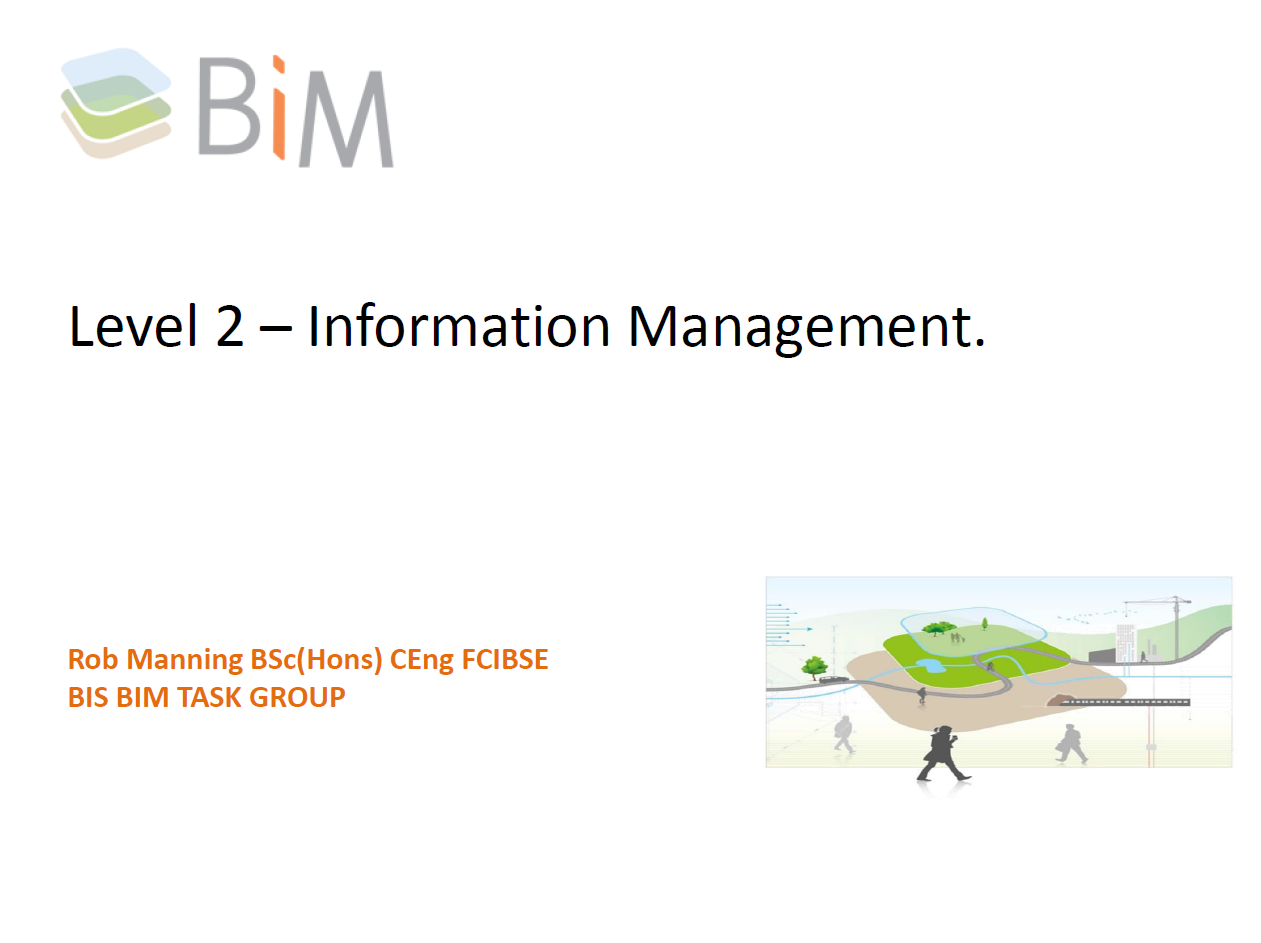 The first three items demonstrated the need for BIM Toolkit, and the remaining topics explained the requirement contained within the Innovate UK competition. Sarah Delany of RIBA Enterprises then gave a presentation on the Toolkit, giving some background to the project from RIBA Enterprises’ perspective, and demonstrating its main features. The presentation looked at the various features of the Toolkit, against the backdrop of the project phases identified in PAS 1192-3:2013:

The BIM Toolkit is a project-based tool. As well as the usual project information, the tool lets the user input data and assign roles at each stage of the project (the RIBA 2013 Plan of Work is used). Certain key themes are displayed in the pane on the left hand side (see red box in the image below) which can be completed for each stage. 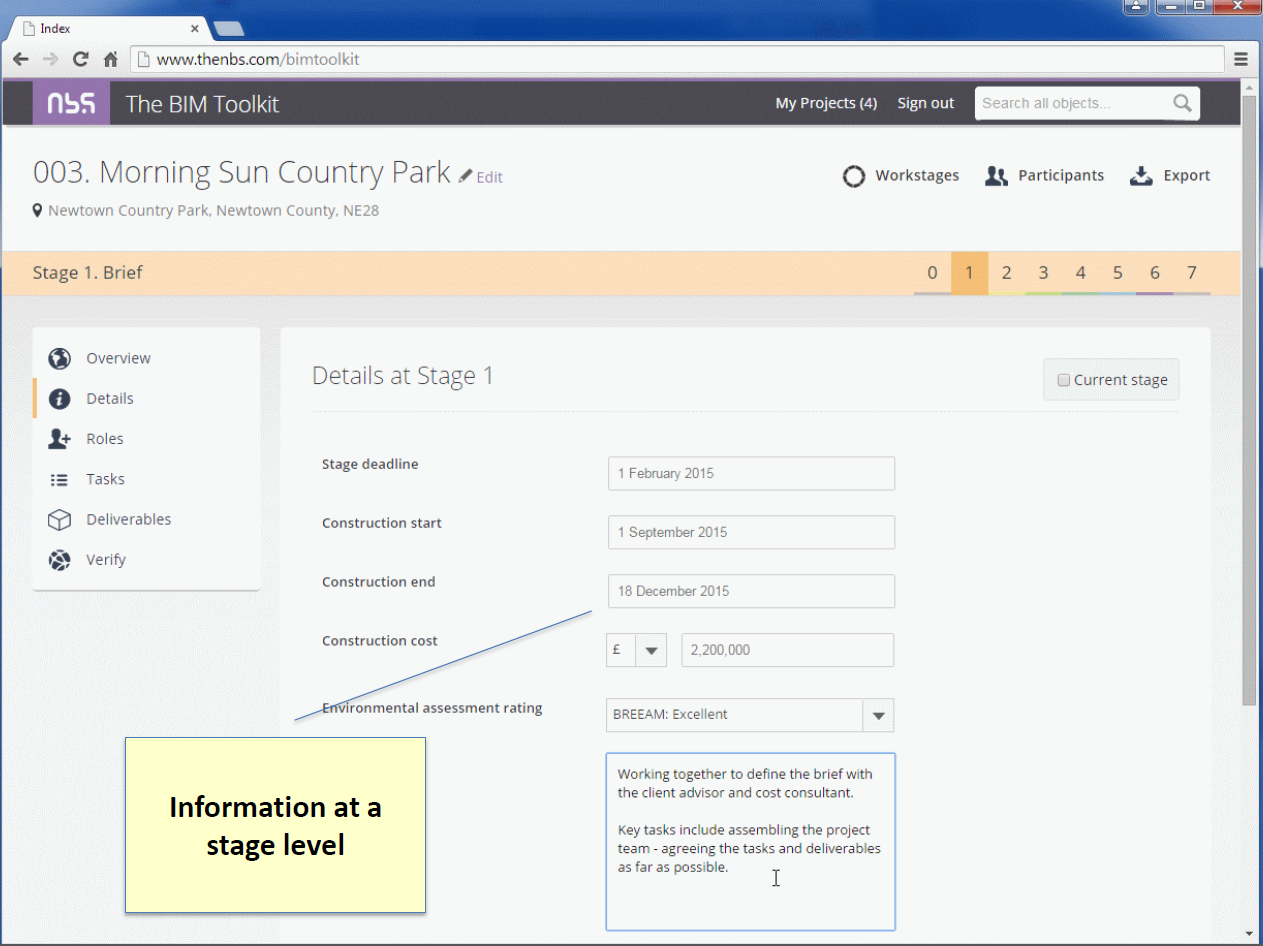 The Toolkit also incorporates a classification structure (Uniclass 2015), and a data validation facility, although these were not included in the presentation.

There was a lot of information to take on board and the coffee break after the last of the presentations was welcomed by all. It also gave the audience a chance to collect their thoughts and frame some telling questions.

As was expected, the questions were wide-ranging, from how the tool affected what information manufacturers were expected to produce, to how the tool was intended to be used. This latter enquiry highlighted a key aspect of the tool, which had previously been misunderstood – at least by me. One of the MEP constructors asked if the tool was meant to be hosted in the project environment, where all members of the team would be able to see it. Rob Manning’s response was that the tool was meant to be used by the client, who would then export it into another environment for use by the project team if required. The same person then asked if it was in fact a tool for the client and Rob Manning said that was indeed the case. I must admit that at that point I was struggling to see the collaborative element of the Toolkit.

The name of the tool also raised some questions. Given that it was for the use of the client, someone asked if the name of Toolkit was perhaps not as helpful as it could be. Rob Manning said in response that perhaps the name may need to be reconsidered. Someone in the audience suggested that EIR Writing Tool or Briefing Tool may be more appropriate.

BSRIA is considering holding a similar event in early June. This will give the industry another opportunity to ask questions once they have had a chance to look at the Toolkit in more detail, and consider how it relates to their working environment. This will also act as useful feedback to RIBA Enterprises at the end of the beta testing period and help to shape the new release, currently due sometime in June. In the meantime, BSRIA agreed to take any comments attendees may have between now and June and feed them back to RIBA Enterprises.

In summary, it was good to see the BIM Toolkit and to hear the Government client’s aspirations. Also, it is worth bearing in mind how much has been achieved in such a short space of time. However, I think that there is a lot of work still to be done to get the beta version to what was intended in the original competition brief. It will be interesting to see how the June release has progressed.

Have a look at the beta version of the BIM Toolkit (www.thenbs.com/bimtoolkit) and send any comments to RIBA Enterprises. It’s important to have your say and to help make the final output of real value to the construction industry.

Retrieved from "https://www.designingbuildings.co.uk/wiki/BSRIA_BIM_Network_event_-_Delivering_the_Level_2_BIM_tools"
Create an article