All Party Parliamentary Group for Excellence in the Built Environment

All Party Parliamentary Groups (APPGs or APGs) are informal cross-party parliamentary groups run by and for Members of the House of Commons and the House of Lords. They may involve individuals and organisations from outside Parliament.

Secretariat services are provided to the group by the Construction Industry Council (CIC), a not-for-profit forum for professional bodies, research organisations and specialist business associations in the construction industry. Group information and publications are made available on the CIC website.

CIC suggest that the primary remit of the APPG for the Excellence in the Built Environment is to '…present a holistic and overarching view from all sectors involved in the planning, design, construction, management and maintenance of the built environment.'

It has published reports including:

In July 2016, the Group published More homes, fewer complaints, Report from the Commission of Inquiry into the quality and workmanship of new housing in England. The report recommended:

In October 2016, the Group launched its fifth inquiry, to consider the implication of Brexit on skills in the construction industry. 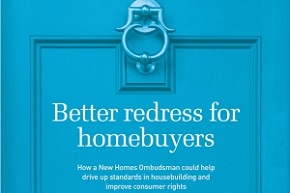 Building on 2016's 'More homes, fewer complaints', the report proposed the Ombudsman should be independent, free-to-use and should provide a swift resolution to disputes. It would be funded by a levy on housebuilders, increasing in size according to the size of the company. The report recommended that a code of practice be drawn up by government, warranty providers, housebuilders and consumer groups which could then be used by the Ombudsman to help them adjudicate on disputes.

The report recommendations were presented to the MHCLG as part of their consultation on proposals for a single housing ombudsman. It can be downloaded here.