The Warm Arm of the Law 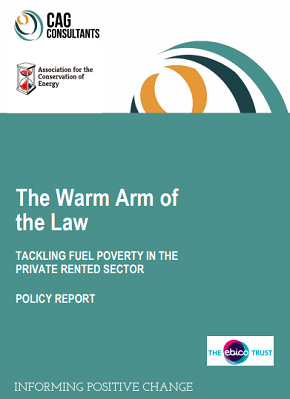 In August 2018, the Association for the Conservation of Energy (ACE), working in partnership with CAG Consultants, published 'The Warm Arm of the Law'. This is an Ebico Trust-funded (through any profit made by the energy supplier Ebico) research project looking at the extent to which the Housing Health and Safety Rating System (HHSRS) and Minimum Energy Efficiency Standards (MEES) are being proactively implemented and enforced by local authorities across England and Wales.

The project was overseen by a steering group involving the Department for Business, Energy and Industrial Strategy, the Local Government Association, the Chartered Institute of Environmental Health, the Association of Local Authority Energy Officers and the Residential Landlords Association.

The private rented sector (PRS) has grown by over 40% in the last ten years and now comprises 20.5% of the housing market in England, compared to just 10% in 1999. Fuel poverty continues to be a major problem and is particularly acute in the PRS, with an estimated 21% of households thought to be in fuel poverty compared with other tenures, the PRS in England has the largest proportion of energy inefficient F and G rated properties.

As BRE have estimated the financial cost to the NHS from poor energy efficiency in the PRS, analyse the data generated by English Housing Survey surveyors for reporting to central government, and provide assistance to local authorities on better understanding their local position in terms of numbers and local distributions of private rented households and energy efficiency, they were invited to take part in the research (a lengthy stakeholder telephone interview took place in December 2017). The interview elicited views on how effective HHSRS/MEES are or could be in terms of raising the energy efficiency of privately rented properties. 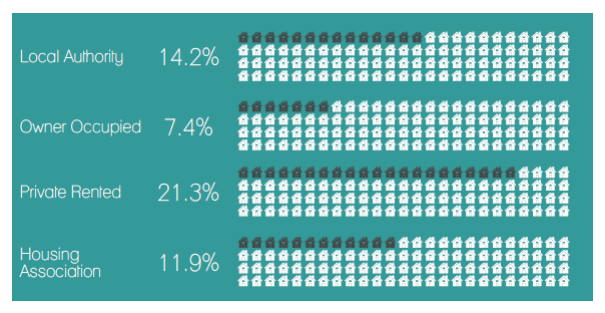 The headline finding from the research is that local authorities are not doing enough to enforce minimum energy efficiency standards in the PRS. This is hardly surprising given the budget cuts, with local authorities reducing spend on enforcement activity by a fifth between 2009/10 and 2015/16.

Stakeholders reported mixed feelings about HHSRS, with some finding it useful for dealing particularly with cold hazards which may pose serious health concern and where there is no financial contribution limit, while others argued the guidance is ambiguous.

The introduction of simple minimum energy efficiency standards under MEES was felt by some to be a positive step, although some stakeholders felt it could only be effective if amended and additional resources made available for enforcement. Stakeholders also felt that there was a lack of clarity on how these two systems could work together.

The published 140-page report makes a number of recommendations including:

BRE’s work in this area is referenced on a number of occasions, including:

This article was originally published here by BRE Buzz on 20 August 2018. It was written by Simon Guy.

Retrieved from "https://www.designingbuildings.co.uk/wiki/The_Warm_Arm_of_the_Law"
Create an article