The Sharp Centre for Design

The Sharp Centre for Design is part of the Ontario College of Art and Design (OCAD). It was created as part of a wider project to allow the college to expand, and can be found in the heart of Toronto, a kilometre north of the famous CN Tower. 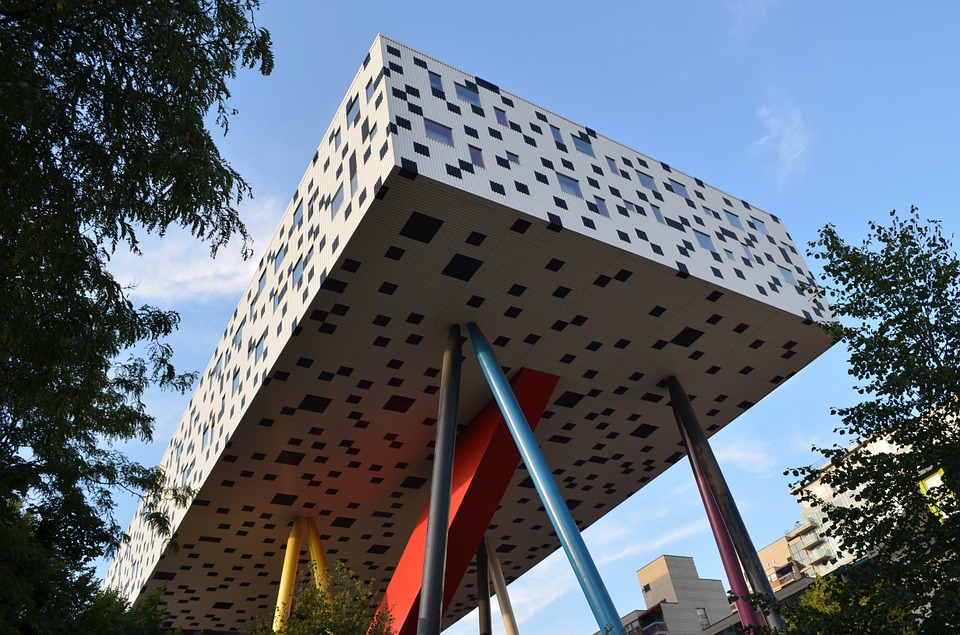 It was designed by Alsop Architects in a joint venture with Toronto-based Robbie/Young + Wright. They were selected in 2000, and the $42.5 million construction started in 2002. It was completed in October 2004.

The Sharp Centre for Design is formed by a rectangular structure 26m above the ground, supported by twelve brightly-coloured steel columns, located directly over the oldest building on the Campus. The building was raised above the ground to preserve views of Grange Park through McCaul Street. The free area below the building houses a plaza, providing access to, and an extension of the park.

Its 84m long, 31m wide, 9m high ‘table-top’ form is created by a steel box truss clad in a ‘pixelated’ black and white aluminium skin. This contains two stories of accommodation, including art studios, teaching spaces, meeting rooms, exhibition spaces and offices. It is connected to the existing building by a lift and stair core and sits on twelve 28m-long tapered steel columns supported by reinforced concrete drilled caissons.

You can see a video of the building construction on YouTube.

The completed scheme, whilst more restrained than the original concept designs, has not been without criticism, seen by some as exclusive, and even described by the RIBA as “just a little insane."

In an interview in 2013, architect Will Alsop said, “Very few people say that they like it. And if they don’t like it, they really hate it, and I think that is good. Hardly anybody can remain indifferent about it. But I think it does the job in all sorts of ways. Particularly the inside of the building is received well by the students.”

The Sharp Centre for Design has won a number of awards, including an RIBA international award in 2004, an Excellence Award by Toronto Architecture and Urban Design in 2005, and a Canadian Consulting Engineering Award in 2005.

Retrieved from "https://www.designingbuildings.co.uk/wiki/The_Sharp_Centre_for_Design"
Create an article