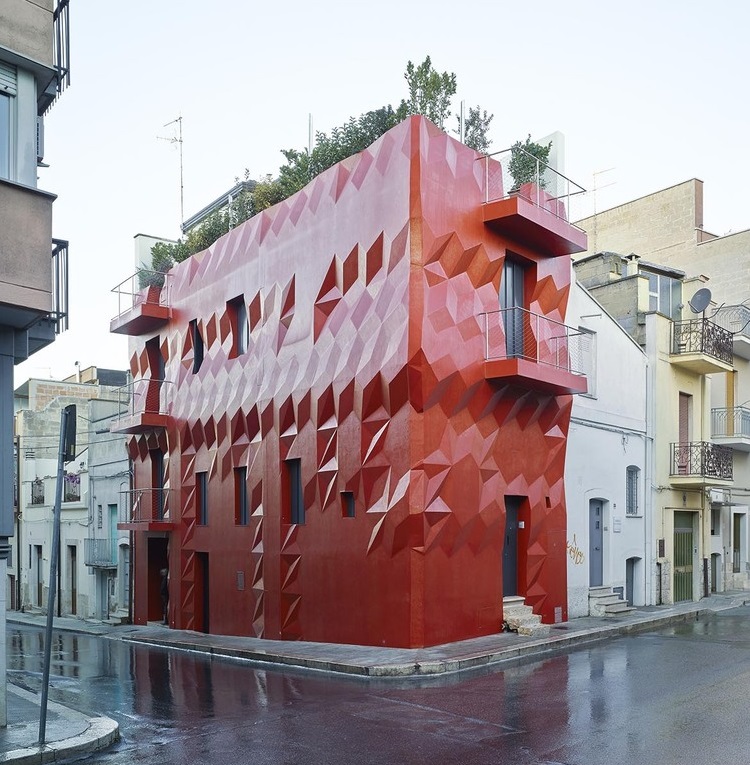 Gentle Genius is a house in Altamura, Southern Italy, renovated according to a design by Giacomo Garziano’s GG-loop studio.

The corner plot house, which has been in the architect’s family since the 1950s, was redesigned by Garziano in 2015 to create a new three-dimensional façade, with the aim being to exploit the contrast between light and shadow, as well as improving its energy efficiency.

Largely made up of tessellating diamond shapes, the faceted surface was created using an exterior insulation and finishing system (EIFS). This is a type of external cladding that includes both solid panels and a render topcoat. The additional layer of insulation helps with the building’s heat retention, reducing its overall energy consumption.

The building’s red finish was achieved with an outer coating made from a mix of plaster, paint and resin. Glittering particles were added for the final resin coating, which gives the building its glittery finish.

Garziano said his choice of red was driven by wanting the house to stand out from the sky and surrounding townscape:

"Red has the longest wave length of the visible spectrum and can be associated with the longest sound waves that, rather than touching our ears, are felt in the torso. It touches the instincts of the viewer. It is not linear, it is a multi-faceted perception that reaches out from the walls, transforming the residential building into a sculpture.

While most of the interior has been left as it was, a small area has been renovated as a guest apartment. This area’s interior is dominated by geometric patterns in a style similar to the exterior. Storage areas and furniture are integrated into walls that feature a honeycomb-like pattern known as a Voronai tessellation. Garziano has called this room 'The Infection' because of its bacteria-like patterns.

See the Unusual Building Design of the Week series here.

Retrieved from "https://www.designingbuildings.co.uk/wiki/Gentle_Genius"
Create an article