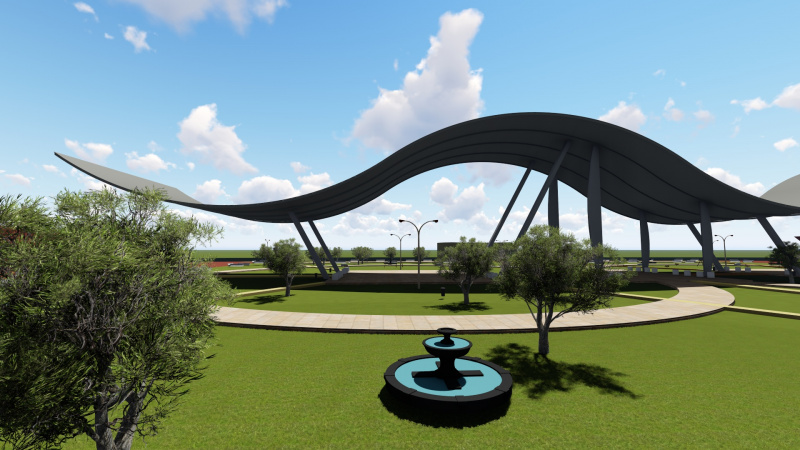 Shell design and construction technologies have been developing over time from stone masonry domes to brick, concrete, steel and then timber domes.

Shells are structures enclosing buildings with smooth continuous surfaces (vaults and domes). There are shallow and deep shells. Upperparts develop compression and the lower parts of shells develop tension. At the bottom of the shells there is tension regardless of whether the structure is deep of shallow.

Shells are usually built with increasing thickness from the crown towards the base. This is due to the thrust force that becomes larger toward the base. However, there are internal stresses that are created due to this increase in thickness.

Stonemasonry is useful for large scale applications and major architectural expressions. The principal components of masonry are stone elements and mortar embedment. Stone elements include naturally available stones, dressed stones from quarries, made-up bricks of sun dried clay and burnt bricks in kilns. Mortar in stone masonry has developed from primitive mud, natural bitumen, a mixture of lime and sand. And the Roman technology of placing pozzolana in place of sand.

However, there are various techniques in which, You mix stone and brick, and sometimes stone alone or brick alone, the combinations were used to bring about a variety of geometric patterns, in a structural point of view masonry is view as a homogenous material. The strength of the masonry lies in its weakest joints. Its load-carrying capacity depends on the mortar strength. The allowed stresses in masonry are categorized into compressive axial, compressive flexural, tensile flexural and shear.

Modern thin concrete shells are the result of the ancestry Roman vaults. Concrete has more advantages as compared to masonry shells. Concrete is a man-made stone that acts well in large scale works. It is an upgrade masonry material that bears compressive and shear forces more times greater than brick and stone masonry. Concrete find much application in the thinner and larger structures. The smoothness and homogeneity of concrete make it monolithic material better than defragmented masonry mass. Concrete can easily carry tension, compression, shear, bending, and torsion as compared to brick or stone masonry.

Thin concrete shells are thicker than membranes for compression and thinner than slab for bending, the invention of cement, aggregate and reinforced concrete has made possible construction of thin shells.

Are derived as one-way arched slab spanning between two parallel longitudinal supports. There is a long barrel and short barrel. Long barrels behave like a beam, while for short barrel shells the top surfaces act like series of adjacent arches.

Conoidal refers to a geometric shell formed by rotating a parabola, ellipse or hyperbola about one axis. Conoids consist of two directrix and two straight line generatrices.

These are shells that project outward from key points of support, depicting an effect of lightness. Cantilevered thin shell structures create a sense of an illusion of loftiness capable of developing a sense of wonder and admiration. Just like a cantilevered beam, a cross-section of thin cantilevered shell displays zones with compression and tensile stresses which are transferred to supports by reinforcements and concrete masses.

Retrieved from "https://www.designingbuildings.co.uk/wiki/Shell_Construction_Technologies"
Create an article