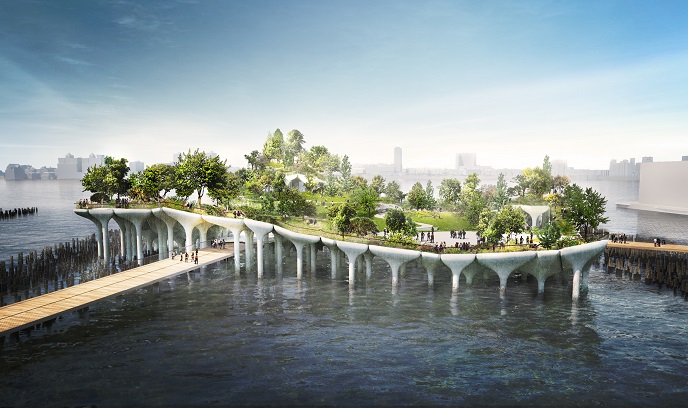 On 3 May 2016, the US Army Corps of Engineers took the decision to modify its existing permit to allow the reconstruction of Pier 54, now known as Pier 55, in Hudson River Park, New York. This paves the way for the Hudson River Park Trust (HRPT) and Pier55 Inc. to progress with construction later in 2016.

The aim of Pier 55 is to provide 2.7 acres of new public park and performance space in Hudson River Park at West 13th Street. Pier 55 also aims to foster new partnerships with schools and enhance the park’s robust environmental and arts programming.

The project has been designed by Thomas Heatherwick, the man behind the controversial Garden Bridge project in London, and landscape architect Signe Nielsen. First announced in November 2014, the Pier 55 project is a partnership between HRPT and Pier55 Inc., a non-profit organisation.

As a public park pier it will include ‘walking paths, rolling hills, seating areas, and open lawns for recreation’. It will also serve as a new home for art, cultural and educational events, and performances, and be open to the public throughout the year.

Madelyn Wils, President and CEO of the HRPT said:

“As stewards of the Hudson River, the Trust worked carefully to reconstruct Pier 54 in a way that would be respectful of the environment. The Pier 55 project is a shining example of what innovative public-private partnerships can accomplish for the good of the city, and now that the regulatory agencies have issued their permits, we are excited to be in a position to start construction.”

In March 2017, construction work on the project was halted following a ruling by a United States District Court judge that requires the project to undergo a wildlife impact review. The judge ruled that the Army Corp of Engineers had failed to consider the project site a protected fish and wildlife sanctuary when it issued the permit. The ruling is a major victory for the City Club of New York, who had been mostly unsuccessful in their fight against the park.

In September 2017, it was announced that the plans for Pier 55 had been abandoned. Having been granted planning permission, and overcoming a series of court challenges, construction had been unable to start due to problems with permits and delays caused by ongoing legal disputes. It was reported that this had led to costs rising dramatically from $35 million to a staggering $250 million.

"It's really, really sad that the project isn't happening. There was enormous public support, everyone was behind it, except there was an unelected group of people who, from a commercial real-estate perspective, had their own gripes. They held the project hostage, slowing it down through repeated legal cases that the project was winning each time, but which were grinding things down."

The news comes shortly after other disappointing news for Heatherwick that his similar Garden Bridge project would also be scrapped following rising costs and the withdrawal of support by the Mayor of London.

However, in October 2017 hopes were raised that the project could be revived. Gov. Andrew M. Cuomo was reported to have brokered a deal between Barry Diller, the entertainment mogul behind the plan, and opponents who had filed a series of lawsuits to stop it.

In return for dropping their legal battle, Cuomo promised to complete the 4.5 mile-long Hudson River Park — which stretches along the waterfront from Battery Park City to 59th Street and includes Pier 55 at the foot of 14th Street — and to protect the marine estuary from development.

Diller said: “I’m going to make one last attempt to revive plans to build the park, so that the intended beneficiaries of our endeavor can fall in love with Pier 55 in the way all of us have.”

Retrieved from "https://www.designingbuildings.co.uk/wiki/Pier_55,_New_York"
Create an article