Of all EU countries, England has the smallest homes by floor area. A study by Find Me A Floor in 2017 found that homes in England have an average floorspace of 71.2 sq. m. This is compared to Italy’s average of 108.2 sq. m and Germany's average of 92.7 sq. m. As a result of the UK housing shortage, the average size of new homes has continued to shrink. (Canada has the largest homes in the world measuring 150 sq m, with the US at 130 sq m)

In 1961, The Parker Morris Committee published 'Homes for Today and Tomorrow', a report on public housing space standards in the United Kingdom. The Parker Morris Standards were then set out in the Ministry of Housing's 'Design Bulletin 6 – Space in the Home', published in 1963.

From 1967, these standards were prescribed in England’s public housing, by linking space, not to the expected occupancy levels, but to the utility of the homes. This approach is still adopted in Scotland, but since the 1980s, England’s focus has been on the delivery of more houses, not space, although the building regulations do set some space standards in relation to circulation space, means of escape and space requirements for people with disabilities.

In addition, a number of cities developed their own minimum space standards, with London introducing its own standards since 2011. There have also been a number of ad hoc standards, such as; The Housing Corporation minimum housing quality standards for housing association properties developed with public subsidy, the Joseph Rowntree Foundation Lifetime Homes standards and so on.

In 2012, the coalition government’s fundamental review of building regulations was labelled ‘the biggest change in housing standards in a generation’. The review prescribed that space sizes for all new-build homes around the country would be brought into line with the London standards.

In October 2015, the government introduced a new nationally described space standard, which set out detailed guidance on the minimum size of new homes. According to this standard, the minimum floor area for any new home should be 37 sq. m. 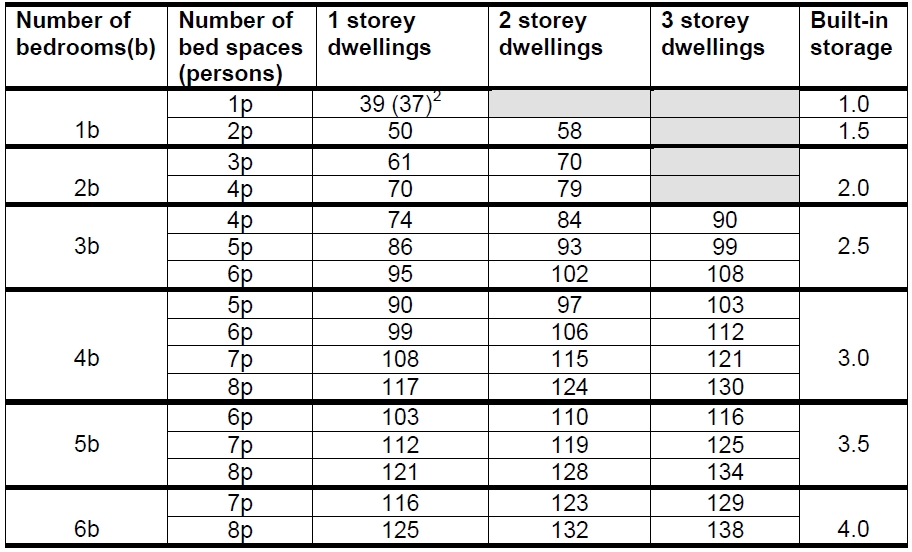 [2] Where a one person flat has a shower room rather than a bathroom, the floor area may be reduced from 39m² to 37m².

These rules were intended to rationalise and streamline the planning system, however, they were criticised for being overly complicated and onerous, as well as being unlikely to have a positive impact. Crucially, the rules for local authorities are only optional, and must be introduced through the planning system (rather than through building regulations) by including a policy in a local plan.

To do this, local authorities must demonstrate need and viability though testing and assessments before conducting a full local plan review, which has been described as unnecessarily bureaucratic and confusing. This means that in order to implement standards which have been described by the government as ‘reasonable’, local authorities are likely to wait for a wider plan review rather which could mean it takes several years to adopt them. In addition, the space standard is open to challenge from developers on site-specific viability grounds, even if the local authority has embedded it in local plan policy.

In addition, in 2013, the government temporarily relaxed planning laws, allowing office buildings to circumvent the planning process when being converted into housing. These conversions are not required to meet any planning-based quality standards, including the minimum space standards, meaning that apartments have been completed which are far smaller than the prescribed minimum of 37 sq. m.

Housebuilders and industry bodies such as RIBA have been calling for the national minimum space standard to be embedded within the Building Regulations, set as a standard for housing design across the country. As well as being beneficial for homeowners and tenants, housebuilders have argued that this would provide them with more certainty when bidding for land.

In a separate move in December 2017, the government announced they were putting rogue landlords 'on notice', with the introduction of new measures to stamp out overcrowding and improve standards for those renting in the private sector. This includes new rules setting minimum size requirements for bedrooms in houses of multiple occupation:

Please check the date of the information about the size of homes in Britain and the rest of Europe. I believe it is very old and we no longer have the smallest homes.

Thanks for your comment. It is indeed the case that England has the lowest average floorspace in Europe - see the updated first paragraph. -Ed.