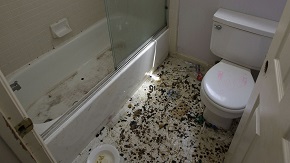 In December 2017, the government announced they were putting rogue landlords 'on notice', with the introduction of new measures to crack down on bad practices, stamp out overcrowding and improve standards for those renting in the private sector.

Subject to clearance through Parliament, landlords renting properties in England that are occupied by five or more people, who come from two or more separate households, will require a licence. It is expected that this will affect around 160,000 houses.

From April 2018, new criminal offences will be added to the list of those which will automatically ban an individual from being a landlord. This will include a conviction for burglary and stalking.

In an effort at driving up safety and standards in the private rented sector, councils will be provided with £12 million funding to take enforcement action in hotspot areas. Fines of up to £30,000 will be brought against 'dodgy' landlords, as well as protections for tenants from 'revenge evictions'.

The new measures will also benefit wider communities who live in close proximity to poorly-maintained properties, those without proper bins, dumped rubbish and anti-social behaviour. The measures will put the onus on landlords for ensuring council rules on refuse and recycling are followed.

To prevent overcrowding, new rules are to be introduced setting minimum size requirements for bedrooms in houses of multiple occupation (of which there are around 500,000 in England). While national mandatory licensing only applies at present where properties are 3-or-more storeys, the new rules will apply to flats as well as one- and two-storey properties.

These new minimum size requirements are:

The licence will enable local councils to ensure only rooms meeting these standards are used for sleeping. It must also specify the maximum number of persons who may occupy any room. The total number across the different rooms must be the same as the number of persons for whom the property is suitable to live in.

Then-Housing and Planning Minister Alok Sharma said; "Every tenant has a right to a safe, secure and decent home. But far too many are being exploited by unscrupulous landlords who profit from providing overcrowded, squalid and sometimes dangerous home. Enough is enough and so I’m putting these rogue landlords on notice - shape up or ship out of the rental business. Through a raft of new powers we are giving councils the further tools they need to crack down these rogue landlords and kick them out of the business for good."

In October 2018, an investigation by The Guardian and ITV News revealed that rogue landlords were still escaping proper scrutiny. Landlords were still able to collect rent despite previous convictions for housing offences and failure to pass 'fit and proper' person tests required by housing legislation.

In addition, it was found that the rogue landlord database had not had a single name entered into it, more than six months since its launch, and the list was not accessible to the public. This prompted Prime Minister Theresa May to pledge a change of policy to allow access to the database for tenants.

Despite this, critics continue to argue that the legislation needs to be clarified and tightened to remove loopholes, and they point to a lack of resources in councils to enforce it effectively.

In November 2018, the government announced that councils will be able to bid for funding to improve their enforcement action against irresponsible landlords.

£2 million will be made available for councils to crack down on rogue landlords and to develop and test innovative ways of clamping down on substandard accommodation.

A range of projects are expected to be supported by the funding, such as helping councils build relationships with emergency and legal services, local housing advocates and other organisations. In addition, councils may support tenants to take action through rent repayment orders or develop digital solutions to help officers report back and speed up the decision-making process.