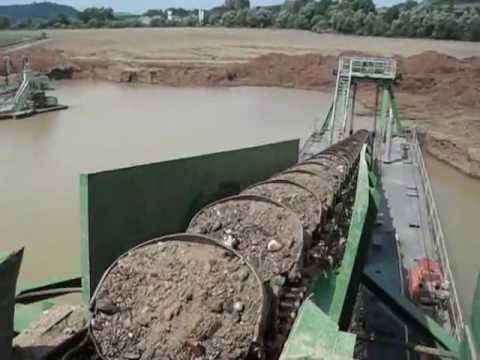 Dredging is the process of excavating and removing sediments and debris from below water level, typically from the bottom of lakes, rivers, harbours, and so on. Dredging is generally necessary because of sedimentation which is the process in which sand and silt washes downstream and accumulates over time in channels and harbours.

Dredging may be carried out for a number of reasons:

Before commencing dredging, it is important that site investigations and hydrological surveys are undertaken to assess the likely consequences of removing the material. Likely material movements and the seabed characteristics can be analysed from these surveys.

Some of the main factors which are considered during the planning stages include:

The plant used for dredging can be broadly categorised as either suction or digging dredgers.

These are the most commonly used types of dredger. Variations include:

This is a self-propelled hull capable of loading its own hold using a centrifugal pump which drags along the bed. It is typically used for dredging sand, silt and some clays. Winches or cranes are used to raise and lower the suction pipes, which have a maximum dredging depth of around 35 m. Hydraulically-operated doors in the hopper’s bottom discharge the material.

The advantage of this dredger is that it can operate in poor sea and weather conditions, and can transport soil over long distances.

This is moored using anchor legs and combines suction with a powerful cutting action. It uses a revolving cutting head and is capable of breaking up and removing firmer materials, such as hard clay and soft rock. The material is sucked up a pipe and discharged into barges for disposal. They can be used at maximum depths of around 40 m, and have the advantage of being able to produce a fairly uniform and level bed.

This is the common type of dredger, where a chain of buckets continuously scoop material out and raise it above water level before tipping it out onto chutes. (See top image.)

This is also known as a backhoe dredger as it follows the same principles as the land-based backhoe excavator. The advantage of this type of plant is that it can be used to dredge a wide range of materials, including obstacles such as boulders.

This is also modelled on the land-based dragline, and is limited to shallow inland waterways. A bucket is lowered onto the material to be excavated and dragged along its surface by a dragline. Dredged material it typically deposited on the banks of the waterway.

This uses a grab crane which is mounted on the deck of an anchored or spud-rigged pontoon. The grab is usually a 'clamshell' so as to retain mud and silt. Material is loaded into hopper barges.

Retrieved from "https://www.designingbuildings.co.uk/wiki/Dredging"
Create an article