Building Information Modelling (BIM) is a very broad term that describes the process of creating and managing digital information about a built asset.

In the UK, the Government Construction Strategy stated that the '...Government will require fully collaborative 3D BIM (with all project and asset information, documentation and data being electronic) as a minimum by 2016'. This represents a minimum requirement for Level 2 BIM on centrally-procured public projects.

Level 2 is the creation of a managed 3D environment with data attached, but created in separate, distinct discipline models. These separate models may originate with the client, architect, structural engineer, building services engineering, contractor, sub-contractors, suppliers and other consultants. A federated model is an assembly of these distinct models to create a single, complete model of the building.

The common data environment (CDE), first authored and explained in BS1192-2007 by Mervyn Richards OBE and the BSI publication BIP2207, is the single source of information used to collect, manage and disseminate documentation, the graphical model and non-graphical data for the whole project team (i.e. all project information whether created in a BIM environment or in a conventional data format). Creating this single source of information facilitates collaboration between project team members and helps avoid duplication and mistakes.

Ownership of information within the CDE remains with the originator of that information. Individual models produced by different project team members do not interact, they have clear authorship and remain separate. This means that the liabilities of the originators are not changed by the incorporation of their model into the federated model. There may be complications however where ownership changes as the project progresses, for example replacing design team objects with specialist sub-contractor objects.

The CIC BIM protocol proposes that an information manager, appointed by the client, should set up and manage the common data environment. The information manager is essentially a procedural gate-keeper, policing the common data environment to ensure that it follows the agreed protocols and that the data is secure. They are not a BIM co-ordinator and have no design responsibility and no responsibility for clash detection or model coordination.

Responsibility for supplying and managing the supply-side common data environment should be clearly identified in the employer's information requirements.

PAS 1192 2: Specification for information management for the capital/delivery phase of construction projects using building information modelling, suggests that a CDE may use a project server, an extranet, a file-based retrieval system or other suitable toolset.

It proposes that the advantages of a CDE are:

And that, 'if the procedures for sharing information are consistently used by the design teams, spatial coordination is a by-product of using the CDE processes, and will deliver production information that is right first time... it provides the ability to produce traditional drawings or documents as views of multi-authored data within the CDE. It also gives greater control over the revisions and versions of that data.'

Information within the CDE can have a wide variety of status levels. However, there will generally be four main areas of information, with a sign-off process allowing information to pass from one area to the next:

A typical structure is illustrated below. 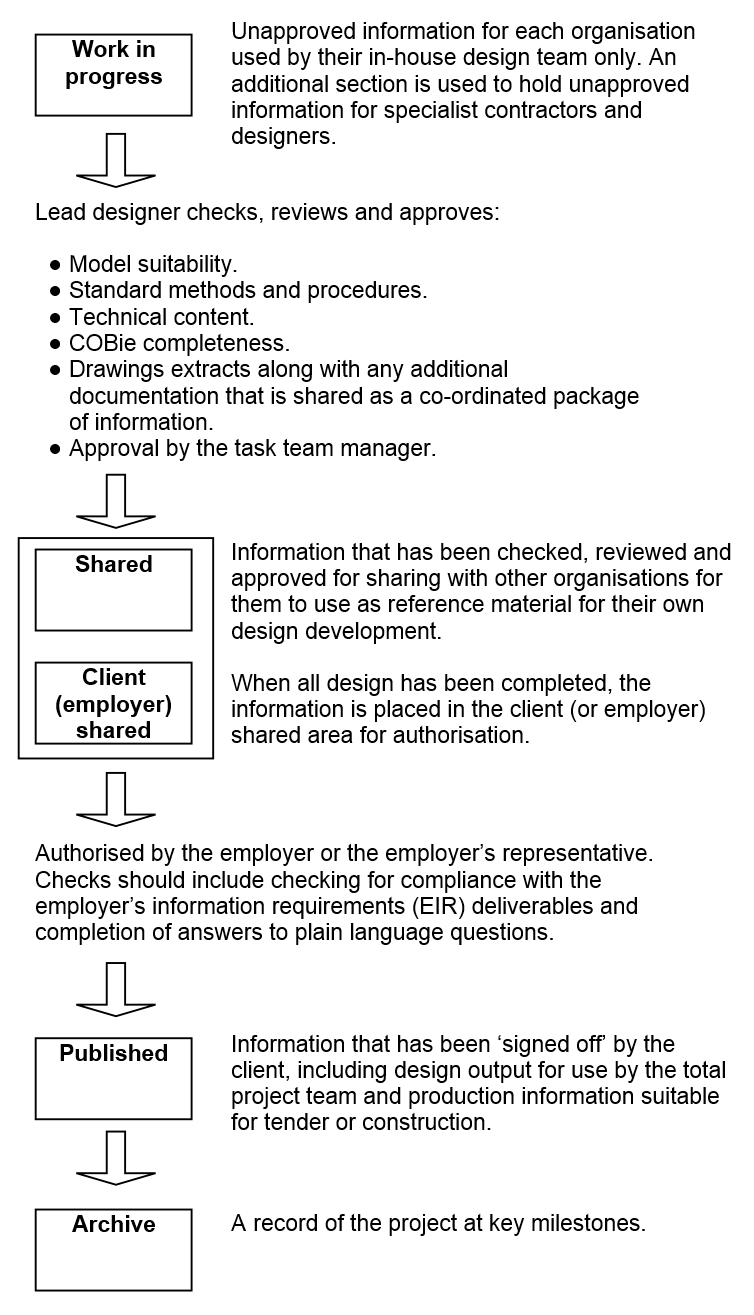 While this may sound complex, on small projects, the CDE might simply be common folders on a server, or may use a free, web-based file-sharing application. Even on large projects, where sophisticated software might be used, during the early stages of the project it might simply be matter of creating four folders in which files are stored, with files named in accordance with a standard naming protocol such as that outlined in BS 1192:2007 (now replaced by BS EN ISO 19650).

'A CDE solution could be software, or it could be another form of tool. If information is
exchanged by a non-digital solution (for example, a postal service) and/or stored in an
organised hard-copy cabinet (which may, for example, be required on a sensitive project
where digital methods are not permitted), then this can also be described as a CDE solution that can be supported by workflows.' Ref https://www.ukbimalliance.org/project/information_management/

The 1st sentance of this article is misleading. BIM (even at Level 2) does not necissarily involve a 3D model, it may be simply a collection of 2D drawings and/or other project documents stored within a Common Data Environment (CDE) by various parties.

The second para is a true statement: In the UK, the Government Construction Strategy stated that the '...Government will require fully collaborative 3D BIM (with all project and asset information, documentation and data being electronic) as a minimum by 2016'. This represents a minimum requirement for Level 2 BIM on centrally-procured public projects.