U and I Think event with Studio SWINE 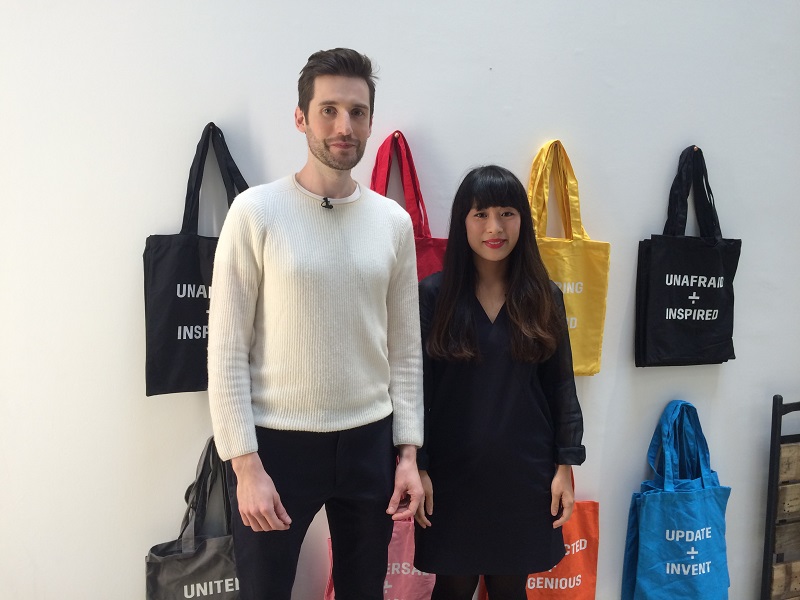 Studio SWINE (Super Wide Interdisciplinary New Explorers) were invited to give a presentation on the subject 'transforming the unloved and overlooked into something unusual and ingenious'. The award-winning duo create works with an interdisciplinary approach across art, design and film, exploring themes of regional identity, sustainability and the future of resources in the context of globalisation.

The studio is a collaboration between Japanese architect Azusa Murakami and British artist Alexander Groves, both Product Design graduates from the Royal College of Arts. They began their talk by explaining how, without enough funding to set up their own studio in the UK, they moved to Sao Paulo for inspiration. Without contacts or decent accommodation, they began walking the streets, observing and documenting life on a blog 'Postcards from Brazil'.

The street became their inspiration. They followed the lead of the 'catadores' who move around the city collecting rubbish, and adopted a nomadic 'moving architecture' approach to their work, resolving to do without a fixed studio.

Their first project was creating furniture from aluminium cans they collected and melted down in a reclaimed beer barrel.

Noticing the abundance of wig shops in Sao Paulo, they discovered that China is the largest exporter of human hair in the world. So their next project took them to Shandong province, to the world's largest hair market, a 'Mad Max'-style place where bikers in leather arrive to buy and sell stock sourced from provinces around China as well as India.

Using hair, and bioresin as a binding agent, they made mock 'tortoise shell' sculptures and eyewear frames, demonstrating the potential of hair to make products that are both fashionable and sustainable.

Their next project took them to the Atlantic 'gyre'. Since the discovery of the Pacific Garbage Patch in 1997, 100 million tonnes are estimated to have accumulated, more a 'plastic soup' than a tangible mass. They began built an improvised furnace and began melting down the small plastic pellets that are regularly washed up from the gyre on the beach of Porthtowan in Cornwall to assess whether they could be repurposed.

After running a Kickstarter campaign they were able to charter a boat to the Atlantic gyre. Inspired by the maritime craftworks local to coastal communities around the world, they recovered and melted down marine plastic, processing it into a sea chair.

As their work began to win awards and attract attention, they were approached by the Crown Estate to design a small series of public benches for Piccadilly. They sought direct inspiration from the shops of St. James, wanting to translate 300 years of history in craft-making into their benches.

The 'shirt' bench took the chevron patterns of fabric cutting and applied folding details to give the impression that it had been made by a shirtmaker. The 'shoe' bench used the organic curves and leather patterns of shoe 'stays', while the 'pipe' bench used rococo wood with bronze inlays, blasted in the same way as it would be for the mouthpieces of pipes.

The talk was thoroughly engaging and enlightening, with U+I Director Richard Upton vocalising the room's inspired mood by asking “can I come and work for you…?” The work of Studio SWINE demonstrates that with the right amount of curiosity and imagination, overlooked and discarded materials can be transformed into completely new and exciting objects; something that perhaps could be borne in mind by a construction industry that produces 32% of the UK's landfill waste.

Retrieved from "https://www.designingbuildings.co.uk/wiki/U_and_I_Think_event_with_Studio_SWINE"
Create an article