Shaping the Future of Construction: Inspiring innovators redefine the industry

Elon Musk’s tweet in December 2016 startled the construction industry. He was not joking: only a month later, he started excavating the first test trench on Space X headquarters in Los Angeles – an incredibly fast move for such a traditionally slow sector.

Thanks to Musk’s visionary and bold approach, he succeeds in attracting the best talent to his projects – a challenge traditional construction companies find hard to meet. 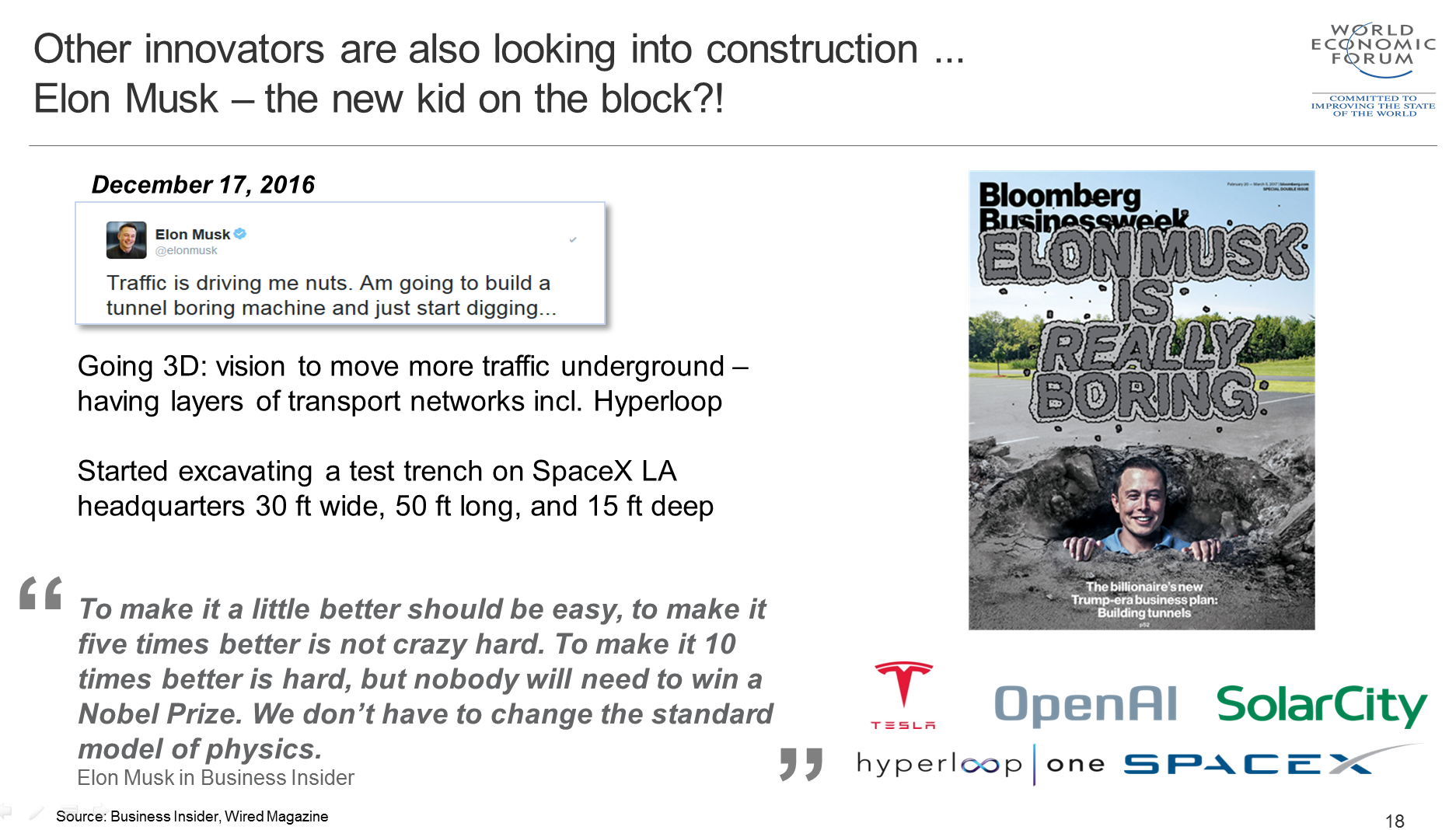 Shaping the Future of Construction: Inspiring innovators redefine the industry, a white paper published by the World Economic Forum and Boston Consulting Group in March 2016, this is just one prominent example of a growing number innovators and disruptive companies shaking up the industry. With 3D-printed houses, automatically designed hospitals, prefabricated skyscrapers – once futuristic dreams are now becoming a reality

Relative to other industries, productivity in construction stalled over the past 50 years. Technology was not making any fundamental advances, and companies remained averse to changing their traditional methods. Recently, however, transformative technological developments have emerged, and some pioneering firms have adopted them for current projects. These developments – 3D printing, building information modelling (BIM), wireless sensing and autonomous equipment, to name just a few – are already starting to turn traditional business models upside down.

Shaping the Future of Construction outlines 10 cases that illustrate the value of embracing innovation. Prominent flagship projects, such as Dubai’s Burj Khalifa, the world’s tallest building, and the Edge in Amsterdam, the world’s most sustainable office building, showcase state-of-the-art innovation.

So, too, do the various pilot projects or start-ups that the report analyses, such as the 3D printing of houses by Chinese company Winsun or the predictive analytics of construction data by Chicago-based Uptake, Forbes’s hottest start-up of 2015 and now valued at over $2 billion. Jointly, their inspirational stories give a glimpse of the industry’s future.

For society, it could be a bright future: construction clients and communities at large will benefit from the long overdue transformation of the industry. And change is urgently needed if we’re going to respond to megatrends such as climate change, migration into urban areas and a new global push for infrastructure.

As a reliable source of entry-level jobs for immigrants and as a provider of affordable housing, the construction industry is sure to be at the centre of public debate. And if public budgets tighten further, the industry’s cost-effectiveness will come under even sharper scrutiny. Incremental change is not an option; innovations in construction could help make a serious difference, both economically and environmentally.

[edit] How construction companies can keep up

So the pace of innovation is accelerating, and that’s a good thing. But companies must act swiftly to keep up and reap the full benefits of these new technologies. Or, to paraphrase sci-fi writer William Gibson, the future of construction is here now – it’s just not evenly distributed. Innovative companies and projects may demonstrate the art of the possible, but what impact will they have on traditional construction? According to Shaping the Future of Construction, there’s a widening gap between the innovation laggards and leaders, in particular with regards to their digital transformation.

So how can companies stimulate innovative ideas, turn them into reality and ultimately succeed in the market? The report offers a few examples from pioneering firms, with lessons such as:

Companies have nothing to gain from delaying. Once they start improving, the benefits – lower costs, shorter delivery times and reduced environmental impact – can begin to accumulate.

But it’s not up to companies alone. Governments are crucial in the transformation of the construction industry. They need to make it easier for regulators, strategic incubators and project owners to adopt new technologies. The report recommends that governments should update building codes, move to forward-looking, performance-based standards, and introduce more flexible procurement models in infrastructure projects to overcome typical hurdles for innovation.

In fact, infrastructure is again high on the agenda in almost all regions of the world. In the words of John Beck, president and CEO of Canada’s Aecon Construction Group: “There has always been a mismatch between the need for infrastructure assets and the capital to fund them. By leveraging all the remarkable innovations that have emerged in recent years, we have a new opportunity to narrow that gap.”

[edit] Shaping the Future of Construction: read the report here 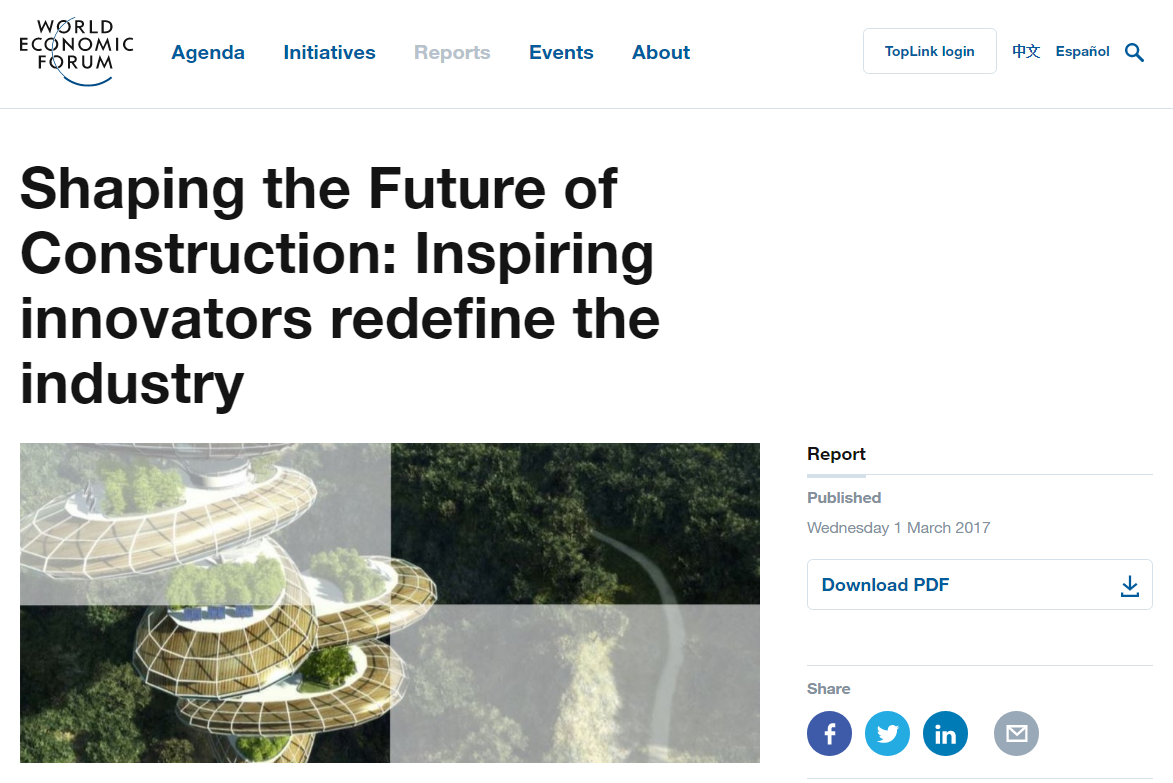 Retrieved from "https://www.designingbuildings.co.uk/wiki/Shaping_the_Future_of_Construction:_Inspiring_innovators_redefine_the_industry"
Create an article