Planning the commissioning of buildings

The best commissioning process is one that is planned from the project’s very inception. Designing in the ability to commission systems properly from the outset can provide huge benefits, especially on cost and performance.

Essentially, good commissioning is the difference between providing a feature that works, and one where its functionality for the end-users has been verified. For example, it’s one thing to include a meter or valve in a design, and another to install it in an easily accessible place. (Even in the exemplar buildings in the Carbon Trust’s LCBP research, installation errors were still found, such as sub-meters installed at toe level.)

Several projects in the LCBP programme had appointed an independent commissioning specialist to oversee the whole process, from design through construction and, vitally, during handover. The specialist in these cases was appointed by the main contractor.

In a parallel initiative, the Commissioning Specialists Association (CSA) is recommending that clients appoint a commissioning verification engineer to monitor the process as the ‘client’s friend’. This sits comfortably with practices followed by the more successful LCBP projects. The common factor in many cases was where a person or organisation was involved continuously throughout the design and construction process, and on into occupation.

While a commissioning manager will usually be appointed by the main contractor, they can be appointed directly by the client. This might be the case where the client is an owner-operator, such as a university, and/or has a vested interest in the commissioning being carried out correctly at the early stages to reduce long-term running costs.

LCBP projects that were run by a knowledgeable, interested client, and where a commissioning consultant had been appointed to oversee the process enjoyed a building with better performance and fewer ongoing defects. Others, where there was no follow through from those involved during the construction, tended to suffer performance penalities. These penalties were usually seen in energy consumption being much higher than the design prediction, and low levels of occupant satisfaction with comfort factors, such as temperature, air quality and noise.

Above: The new professional’s view of commissioning overlain on the old leave-it-to-the- last-minute approach to commissioning. The commissioning plan is started at the early stage of the project, and populated with detail as it becomes available. This approach calls on project professionals to plan early, reality-check as they go along, prepare fully for handover, and follow through after occupation to fine-tune and resolve issues as they emerge. 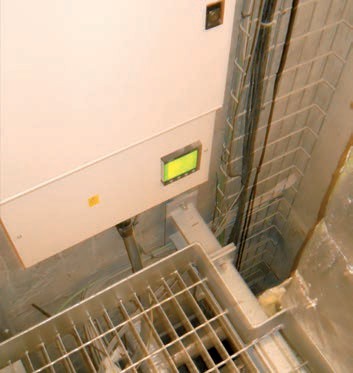 Above: How not to install an electrical sub-meter: at toe level on the distribution board. This happened on each floor of an office block, studied by the Carbon Trust. It might not have mattered had the BMS been set up to read the meter pulses correctly. It wasn’t. The BMS was found to miss around 60 per cent of the meter pulses. Sadly it’s not unusual.

Retrieved from "https://www.designingbuildings.co.uk/wiki/Planning_the_commissioning_of_buildings"
Create an article